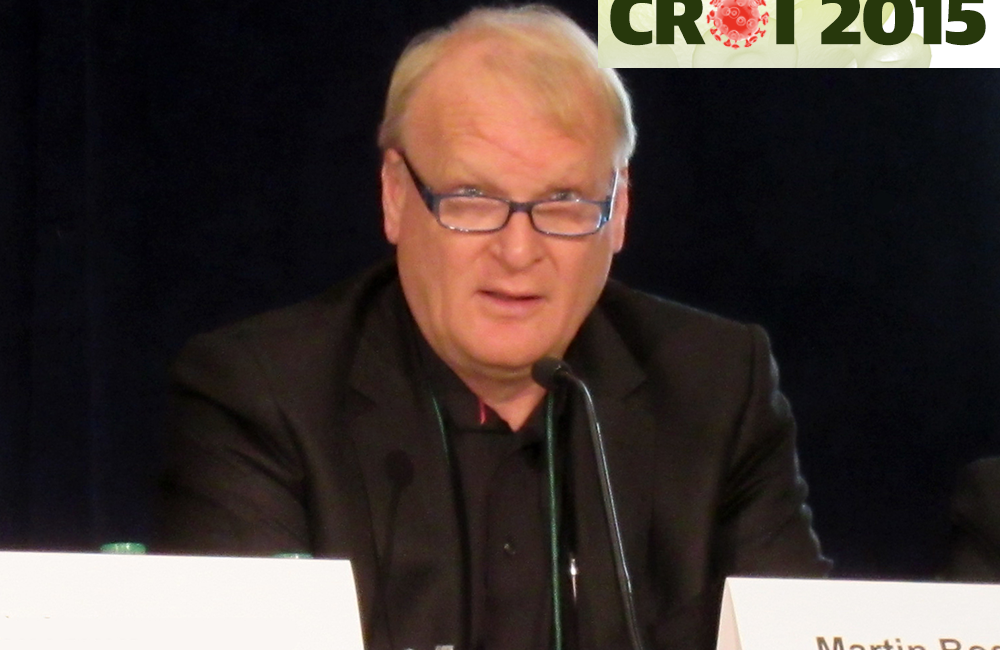 Martin Boeree presenting at CROI 2015. Photo by Liz Highleyman, hivandhepatitis.com
This article is more than 8 years old. Click here for more recent articles on this topic

A combination regimen containing high-dose rifampicin (also known as rifampin) was associated with faster tuberculosis (TB) bacteria culture conversion in people with drug-sensitive TB, but moxifloxacin and the experimental drug SQ109 showed no benefit compared to standard therapy, according to results from a study presented at the recent Conference on Retroviruses and Opportunistic Infections (CROI 2015) in Seattle, USA.

An estimated 9 million people develop active TB disease each year and it remains a major cause of death for people with HIV worldwide. Current standard treatment for TB requires multiple drugs taken for six months or longer, which presents difficulties with adherence and toxicity; shorter, well-tolerated regimens are urgently needed.

Martin Boeree from Radboud University Medical Centre in the Netherlands and colleagues conducted the PanACEA MAMS TB 01 trial to evaluate whether high-dose rifampicin, moxifloxacin and/or the experimental drug SQ109 could reduce the time to Mycobacterium tuberculosis culture conversion from positive to negative. The evaluation programme started in 2007 looking at high-dose rifampicin, moxifloxacin and SQ109 separately, and the MAMS TB 01 trial brought the three products together.

This open-label trial enrolled adults with drug-sensitive, smear-positive TB at seven sites in South Africa and Tanzania. About 70% were men, the median age was approximately 33 years and 7% were HIV-positive. A total of 368 participants were randomised and five were excluded due to errors, leaving 363 in the modified intention-to-treat analysis.

Participants were randomly allocated to receive one of the following initial regimens, followed by standard doses of rifampicin and isoniazid for a total of 26 weeks of treatment:

The trial had a multi-arm, multi-stage design with one interim analysis, after which recruitment to specific arms could be halted due to lack of efficacy based on pre-specified stopping rules. Recruitment to both SQ109 arms was terminated in March 2014 after the interim analysis. The primary endpoint was stable culture conversion in liquid media over 12 weeks.

In the final analysis at 12 weeks, 63% and 57% of participants in the two SQ109 arms, 79% in the moxifloxacin arm and 80% in the 35mg/kg rifampicin arm experienced stable culture conversion in liquid media, compared to 70% in the standard therapy arm.

The researchers also analysed data at 8 weeks so it could be directly compared to previous phase 2 TB trials using shorter initial therapy. In this analysis, the proportions with stable culture conversion were 41% and 32% in the SQ109 arms, 60% in the moxifloxacin arm and 56% in the 35mg/kg rifampicin arm, compared with 42% in the standard therapy arm.

At 12 weeks, the SQ109 arms showed no reduction in time to culture conversion (63 and 66 days) compared to standard therapy (62 days), while the moxifloxacin arm reduced clearance time somewhat (to 55 days) and the 35mg/kg rifampicin arm produced the greatest reduction (48 days).

"35 mg/kg of rifampicin resulted in an increased likelihood of, and shorter time to culture conversion in liquid media, not in solid media," the researchers concluded. "The SQ109 and moxifloxacin arms were not different from [the control arm]."