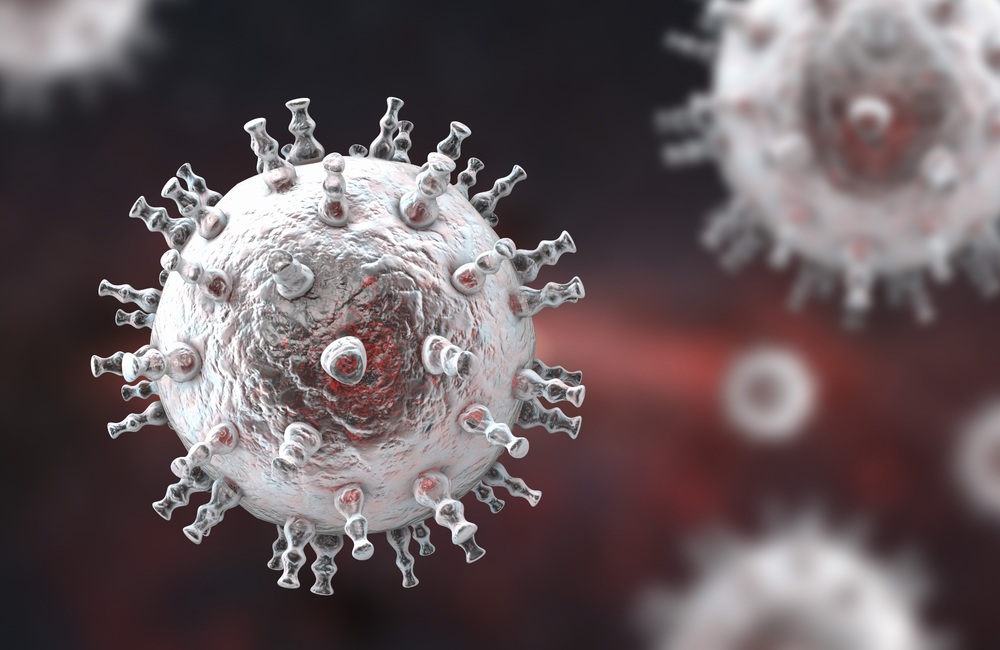 KS is caused by a virus called human herpes virus 8 (HHV-8), also known as Kaposi's sarcoma-associated herpes virus (KSHV). KS develops when infected cells that line lymph or blood vessels begin to divide without stopping and spread into surrounding tissues. Whereas most cancers begin in one part of the body and may later spread to other areas, KS can start in several parts of the body at the same time.

KS usually appears as lesions (abnormal bumps, spots or patches) on the skin or on mucosal surfaces (such as inside the mouth or in the genitals). Lesions can also develop in other parts of the body, such as in the lungs, lymph nodes or gastrointestinal tract.

Infection with HHV-8, the virus which causes KS, is widespread among gay men and in African countries. The virus can be found in saliva and may be passed on during sex, including through wet kissing, oral sex, and using saliva as a lubricant during sex. It can also be spread when adults pre-chew food for infants. There isn’t a vaccine to prevent HHV-8 infection.

A normally functioning immune system can usually keep HHV-8 infections under control and suppress the abnormal growth of cells into KS lesions. Most people who have HHV-8 never get KS. However, when the immune system is weakened and an unhelpful activation of the immune system in response to HHV-8 occurs, KS may develop.

In the early years of the HIV epidemic, KS was a common and widely recognised illness in people who had advanced HIV disease. But soon after effective HIV treatment became available in 1996, the number of cases of Kaposi’s sarcoma fell dramatically. Consistent, long-term use of HIV treatment lowers the risk of Kaposi’s sarcoma. HIV treatment suppresses the replication of HIV, which allows the immune system to better control the HHV-8 virus.

Nonetheless, around 40% of people diagnosed with KS in the past twenty years have had CD4 counts over 200. And KS can occasionally occur in people who are taking effective HIV treatment, have an undetectable viral load and have a much higher CD4 count. Cases like this have most often occurred in older men who have had HIV for many years and spent some time in the past with a very low CD4 count.

KS can occasionally flare up in the first few months after starting HIV treatment. This may be due to a condition called immune reconstitution inflammatory syndrome (IRIS). This occurs when someone has had a very low CD4 count and soon after starting HIV treatment has worsening symptoms of another disease, such as KS. In fact, the illness is thought to be caused by an improvement in the immune system’s ability to detect or mount a response to HHV-8 or KS.

People with HIV and KS occasionally develop other diseases which are also linked to HHV-8 infection. These rare conditions include Castleman disease and primary effusion lymphoma. If you have KS or have had it in the past, it’s worth telling your doctor about symptoms such as fevers, night sweats, weight loss, a general feeling of discomfort and swelling.

On the skin, KS causes lesions (abnormal bumps, spots or patches). These can appear in a wide range of colours, including pink, purple, violet and brown. They may be hard to distinguish if you have dark skin.

They may look quite like a bruise, but do not lose their colour when pressed, as a bruise does. They are generally painless and not itchy. Any part of the skin can be affected, although KS most commonly appears on the feet and legs.

KS in the skin might grow very slowly and show no changes for a few months. In another person, the lesions may grow more quickly, with new areas appearing weekly.

"Consistent, long-term use of HIV treatment lowers the risk of Kaposi’s sarcoma."

When KS lesions develop inside the body, this can affect the functioning of internal organs and even be life threatening. For example, lesions may develop in the lungs, liver, or digestive tract.

Lesions inside the body may cause symptoms. For example, KS in the lungs can cause chest infections, coughing and difficulty breathing. KS in the mouth or throat may make it hard to eat, swallow or speak. When KS affects the lymph nodes and lymph vessels (which form part of the immune system), this can lead to swelling in the arms or legs. This maybe be uncomfortable or painful.

Symptoms like this are more likely to be caused by something other than KS, but could be a sign of the disease. It’s worth having them checked out.

Your doctor may suspect you have KS just by looking at the skin lesions, but you will need a biopsy to confirm the diagnosis. This involves removing a small piece of the lesion with a scalpel or a needle, then looking at the sample under a microscope.

Blood tests will also be needed, to measure the amounts of certain types of cells and chemicals in your blood.

If you are diagnosed with KS but haven’t been tested for HIV, your doctor will discuss HIV testing with you. Knowing whether you have HIV or not will help doctors decide how to treat the KS.

HIV treatment is an essential part of managing Kaposi’s sarcoma in people living with HIV. If you are not already taking HIV treatment, you will be strongly recommended to start.

For many people with KS, this is the only treatment they need. This is particularly the case if your CD4 count is over 150 and the KS lesions are limited to the skin and lymph nodes. Over a period of several months, the lesions should gradually shrink, fade and disappear.

Localised treatment can also be used, primarily to enhance physical appearance. A drug called vinblastine can be injected directly into the lesions. Radiotherapy (using high-energy X-rays to destroy cancer cells) is an alternative technique. These techniques cannot affect the development of lesions in untreated areas or be used to treat large areas.

Chemotherapy may be recommended if you have KS that is likely to develop rapidly (for example, when there are many lesions); when there are lesions in the lungs, stomach, bowel or mouth; or when KS is causing swelling in the affected area. It may also be needed if your KS flared up as part of immune reconstitution inflammatory syndrome (IRIS).

Alternatively, chemotherapy may be recommended if you developed KS when you were already taking effective HIV treatment, had an undetectable viral load and a good CD4 count.

If you need chemotherapy, the British HIV Association (BHIVA) recommends treatment with either liposomal doxorubicin or liposomal daunorubicin. They are usually given through a drip into a vein every two to three weeks for a few months. They have fewer side-effects than some older chemotherapy drugs, but can still cause reductions in the number of white blood cells, making you more vulnerable to infections. If these drugs are not suitable for you, BHIVA recommends paclitaxel as an alternative.

Treatment with newer cancer drugs is being investigated. This includes treatment with immunotherapy and targeted therapy drugs. You might be asked if you would like to take part in a clinical trial to explore the effectiveness of these drugs as, for the moment, researchers do not know if they are better than standard chemotherapy.

The British HIV Association recommends that people with cancer and HIV should be treated at hospitals with a lot of experience of treating cancer in people with HIV. You have the best chance of a good outcome if you go to a hospital with this experience.

Thanks to Dr Alessia Dalla Pria for her advice.