Kaposi's sarcoma remains a concern for people with HIV 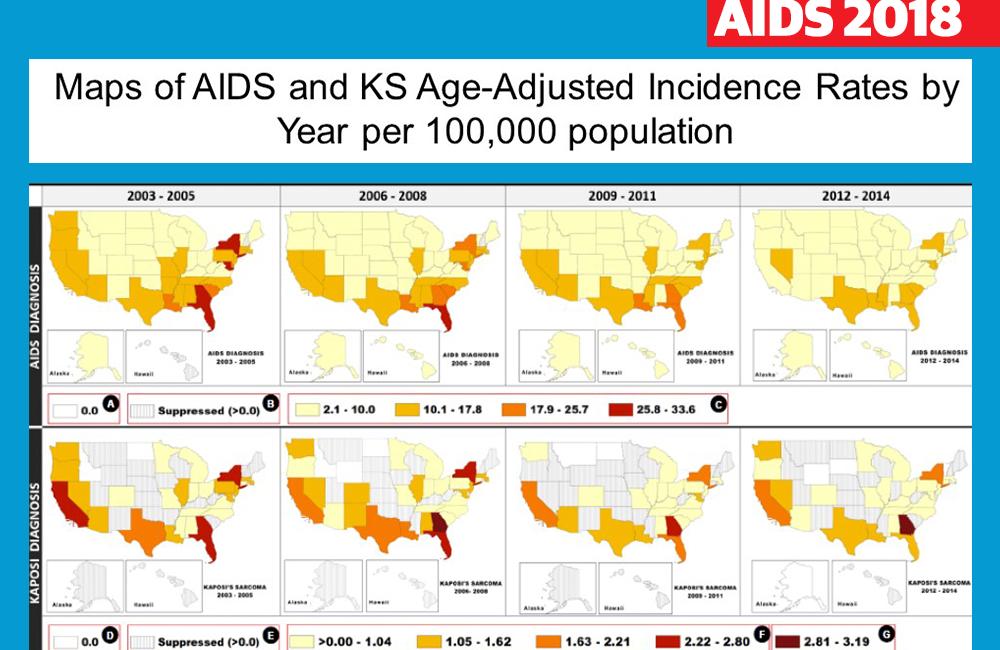 Slide from Elizabeth Chiao's presentation of the US study.

A small proportion of people living with HIV continue to develop Kaposi's sarcoma (KS), a cancer linked to immune suppression, according to studies presented at the 22nd International AIDS Conference (AIDS 2018) this week in Amsterdam.

One analysis found that some people develop new KS or experience KS recurrence even after they start taking antiretroviral therapy (ART) and see a rise in their CD4 count. A second study observed a pocket of higher KS prevalence among African-American men in the US south.

Kaposi's sarcoma, once frequently seen among people with AIDS, decreased dramatically with the advent of effective ART and a decline in the number of people living with HIV experiencing CD4 counts falling to very low levels. However, it remains the most common AIDS-defining cancer, even as rates of some non-AIDS-defining cancers are rising as people with HIV live longer.

Romain Palich of Pitié-Salpêtrière Hospital in Paris presented an analysis of cases of KS in people with sustained viral suppression that were reported to ONCOVIH, a French national multidisciplinary committee that collects data on cancer among people living with HIV.

This observational study included all reported cases of either a first diagnosis of KS or a relapse of KS occurring in people who had been on ART for at least a year and had undetectable plasma viral load (<50 copies/ml).

Of the people with KS, 21 met the viral suppression criteria. Of the remainder, just over half had a viral load above 50 copies/ml and the rest were missing data.

Among the 21 people with new or recurrent KS while virally suppressed, 80% were men. The median age was 54 years; half were born in Africa. They had been diagnosed with HIV a median of 14 years prior and the median duration of viral suppression was 3 years.

Of the KS cases, 40% were first-time diagnoses while 60% were relapses, sometimes many years after the previous occurrence. All patients had KS skin lesions and many had additional manifestations including lesions of the lymph nodes (27%), bronchial tubes (18%), bones (18%), stomach or oesophagus (14%), and mucous membranes of the mouth (5%). Just under half had received treatment for the current KS episode.

Palich noted that a related study by the European CD4/CD8 Ratio and Cancer Working Group of the Collaboration of Observational HIV Epidemiological Research in Europe (COHERE) looked at the link between CD4 and CD8 levels and the occurrence of KS and NHL in people with viral suppression. A persistently abnormal CD4/CD8 ratio despite treatment reflects ongoing immune dysfunction.

This analysis included more than 58,000 patients who achieved virological control (here defined as <500 copies/ml) within 9 months after starting ART. The quarter of patients who experienced restoration of a normal CD4/CD8 ratio along with CD4 cell recovery were slightly less likely to develop KS. People with a high CD8 count at baseline had the greatest risk of developing NHL. Those who experienced virological treatment failure were at much higher risk for both KS and NHL.

Returning to the ONCOVIH analysis, 14 people started treatment according to committee recommendations. Seven received anthracyclines (chemotherapy drugs such as doxorubicin), four received taxanes (the chemotherapy class that includes paclitaxel) and three couldn't receive either due to intolerability and tried other therapies. Seventeen patients continued on their current ART regimen while four were advised to modify their regimen due to drug interactions or resistance.

Of the nineteen patients with adequate follow-up, six had partial KS regression or remission, six had stable disease and four experienced disease progression. Plaich acknowledged that these patients might not be representative, as more challenging cases might have been disproportionately referred to the committee.

KS progression despite treatment and the toxicity of conventional chemotherapy leads some people to a "therapeutic dead end," Palich said, suggesting that immunotherapies such as PD-1 checkpoint inhibitors might warrant a pilot study for people with persistent KS that does not respond to standard therapy.

KS in the US

In another study, Elizabeth Chiao of Baylor College of Medicine in Houston, Texas, and colleagues analysed trends in KS incidence among men living with HIV aged 20 to 54 years in the US (women were excluded due to their low number of KS cases). They used data from the US Cancer Statistics registry for the years 2000 to 2014, which covers all 50 states and nearly 100% of the population.

More than 12,500 men were diagnosed with KS during the study period, according to the study abstract. KS incidence declined by about 4% per year overall from 2000 to 2014, but there were notable demographic and regional differences.

Looking at all racial and ethnic groups together, the biggest decrease in new KS cases was seen in the 30 to 44 age group. KS significantly increased among men aged 20 to 29 and remained unchanged among those aged 45 to 54, Chiao reported.

African-American and Latino men saw a steeper decline in KS than white men. However, at the end of the study period in 2014, the Latino incidence rate remained well above that of white men, while the rate among black men was more than double that of Latinos.

Adjusting for age, KS incidence dropped steeply in the west and northeast, and less so in the south and midwest. While KS declined substantially in cities with large early HIV epidemics, including New York, San Francisco, Los Angeles and Miami, it rose over time in Atlanta. In fact, in 2014 the incidence of KS in Atlanta was nearly twice that of New York City.

Looking at all these factors together, Chiao said that there was no significant overall change in KS incidence among African-American men in the southern US, and there was actually a significant increase among black men in the youngest age group.

Asked to speculate about the reason for these disparities, she suggested that black men in the south – especially young men – may have less access to HIV testing and other care.

Based on these findings, Chiao recommended that future KS epidemiology, treatment and prevention "should focus on closing the persistent gaps in regional, racial and age disparities" identified in KS incidence.

HIV treatment can greatly strengthen the immune system but some weakness may persist. A French study found that 9% of people with HIV who survived an initial cancer subsequently developed a new cancer.
CATIE
2 Feb 22
More editors' picks