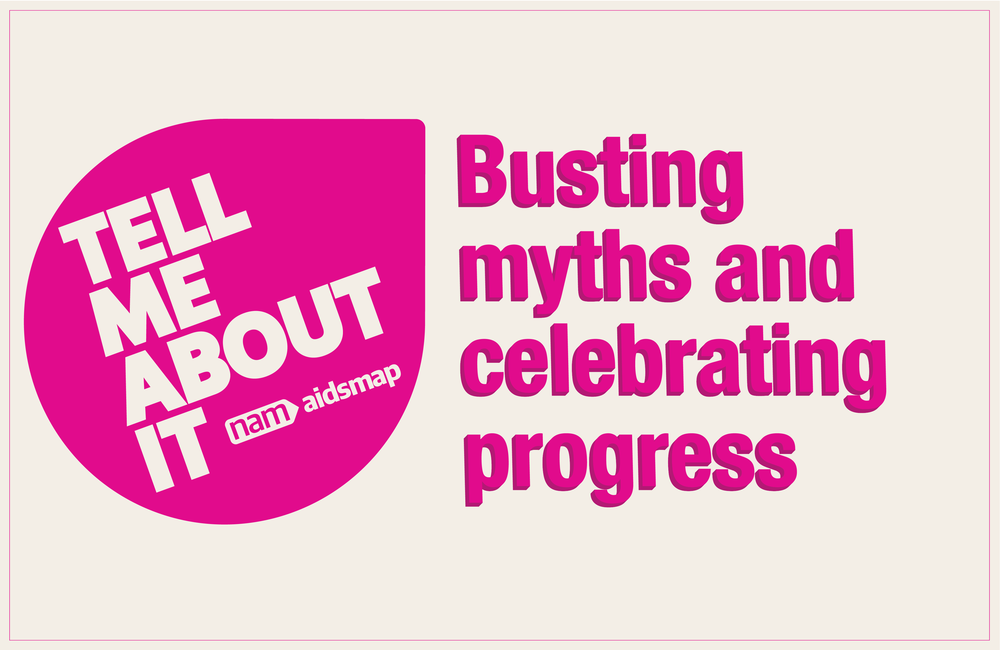 Tell Me About It: HIV Conversations in the Community is a six-part podcast series of honest conversations, sharing accurate and trustworthy information about HIV and sexual and reproductive health in a friendly and open way.

It’s a personal, engaging and honest look at what it really means to live with HIV today, and how that’s changed significantly over the years. Each episode shares developments in prevention and treatment that allow people living with HIV to live long and healthy lives free of fear, and shatters some of the most damaging myths about HIV and its impact on sex, life expectancy, starting a family, staying well, mental health and public attitudes.

It was inspired by the conversations that people living with HIV often find themselves having with those unaware of how HIV has changed in recent years: How did you get it? Aren’t you just a drain on NHS resources? Can I catch it off you? Will you die young?

Hosted by writer, researcher, international performance poet and TEDx speaker Bakita Kasadha, each episode is a conversation between people sharing their experiences of HIV. Most pair a person who is living with HIV and another person who does not have the virus.

Funded by Public Health England through their Reproductive Health, Sexual Health & HIV Innovation Fund, the series counters the ignorance and fear around HIV that can result in stigma and misunderstanding.

You can listen to each episode below. The whole series is available on Apple and Spotify or wherever you get your podcasts.

NAM’s Susan Cole in conversation with Dr Halima Begum, Director of the Runnymede Trust, talking about HIV and health inequalities, racism and HIV stigma in health care, life-changing developments in HIV treatment and what we can do to make sure public systems respond to everyone’s needs.

"At the time, and I didn't expect it to be the case, it felt very intimate and personal to talk to Susan about her early experiences as a young, Black woman living with HIV and then becoming a mother. The conversations around the birth of her child were particularly moving for me. I was also able to bring my own uncertain feelings to the conversation on an issue – living with HIV – and was better informed and educated through the process as the dialogue really focused my mind...It was also inspiring to speak to Susan, as I have no doubt after our conversations that Susan has always been a trailblazer and is still writing her story, despite the challenges she and other Black women faced, and all that she has achieved, despite the odds.  I was left feeling energised and unbound and I hope anyone listening into our conversation will feel some of the hope that sparks from our conversations around race, gender, and health inequities as two women of colour." Halima Begum

Actor Jonathan Blake was diagnosed with HIV in 1982, while activist and educator Rich Watkins was diagnosed in 2016. They discuss how much a diagnosis of HIV has changed over the last 40 years and the impact it has on health, sex, shame and stigma.

"I loved being asked to have a conversation with Rich Watkins: I have huge respect for him as a person, performer, and activist. Our diagnosis was decades apart but there were many things we shared. One of the things that I actually appreciated from our conversation was the resilience we both have developed which is something that those of us living with HIV have to find in order to survive. Thank you NAM for producing these podcasts and hope that those that are diagnosed in the future may find some comfort." Jonathan Blake

"Being part of 'Tell Me About It' was a beautiful moment for me. Collaborating with hero and legend (and my dear friend!) Jonathan Blake was an honour. I learned so much listening to Jonathan’s story, about his bravery, his creativity and his strength. And we had a good old giggle too - as we always do! The biggest take away for me though was even during a year of lockdowns and isolation, for one brilliant hour I was totally connected and felt part of something. And unsurprisingly much of our discussion was about the importance of people and connection. Come to think of it, how better to bond over the experience of living with HIV than to tell each other about it, and get connected? I still listen to this recording for inspiration, and as a reminder that even in the darkest hours our community is still very much there. Not a bad result for an hour’s chat!" Rich Watkins

Jo Josh is a woman living with HIV who works as a communication adviser. She talks to BBC Radio London’s Jo Good about sex, stereotypes and the rarely heard voices of women living with HIV…as well as swimming pools, yoga panic and dealing with the sometimes well-meaning but overly personal question – how did you get HIV?

"Thank goodness I DIDN'T live in Brighton in the early days of the HIV epidemic.  I honestly thought I had heard everything about stigma until Jo Good talked about people not wanting to swim in the same pool as someone living with HIV! Although Jo Good and I go back to the late 80s, we have never talked HIV before. I didn't realise how many people she knew with HIV from her days working at BBC Radio Brighton." Jo Josh

Episode 4: Let's celebrate who we are

Matthew Hodson is a lifelong LGBTQ+ activist, and Executive Director of NAM aidsmap. He talks to Simon Blake of Stonewall and Mental Health First Aid about the legacy of Section 28, coming out in the AIDS era, Dolly Parton and self-confidence. “Because if you bring yourself into the room, your bring your whole self into the room…”

Leading youth advocate Becky Kroger was diagnosed with HIV when she was a child, growing up in South Africa. She talks to Charlie Brinkhurst-Cuff of gal-dem magazine about the medication that changed her life, dealing with disclosure at school, and relocating to Britain for the bad weather and pancakes.

The Sex Clinic’s Dr Naomi Sutton is well used to busting myths, and as a therapist and podcaster Kate Moyle knows a thing or two on talking openly about sex – they discuss the roots of stigma, from colonialism to the language of STIs, and clean vs dirty…and how different things can be now with HIV treatment, PrEP and knowledge.