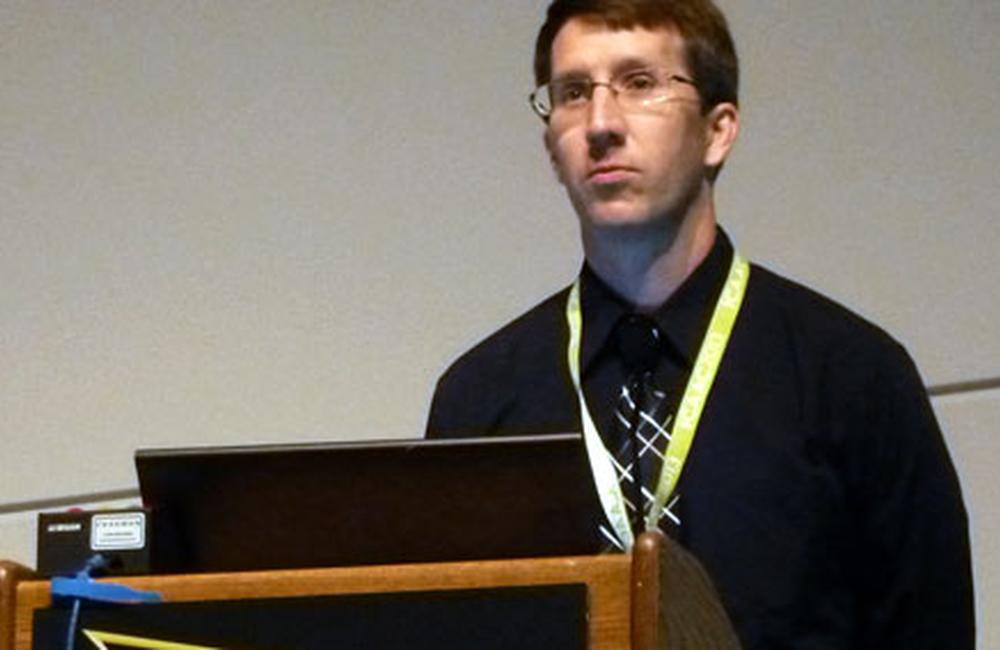 Scott Sutton, from the Dorn Veterans Administration Medical Center and the University of South Carolina, speaking at ICAAC 2013.
This article is more than 9 years old. Click here for more recent articles on this topic

Antiretroviral treatment that requires only a single tablet taken once daily were associated with better viral suppression, higher adherence and lower likelihood of hospitalisation, researchers reported at the 53rd Interscience Conference on Antimicrobial Agents and Chemotherapy (ICAAC) this month in Denver.

Modern antiretroviral therapy (ART) regimens are much better tolerated and more convenient than early combinations that sometimes required handfuls of pills to be taken multiple times a day. It is well known that taking ART as directed most of the time leads to better viral suppression, and studies generally find that lower pill burden is associated with better adherence. But it is less clear whether taking one instead of two pills at a time, or taking them once or twice daily, has a significant effect on treatment adherence and outcomes.

Scott Sutton and colleagues from the Dorn Veterans Administration Medical Center and the University of South Carolina compared viral suppression, medication adherence and hospitalisation amongst US veterans taking single-tablet or multiple-tablet ART regimens.

This retrospective observational analysis used computerised medical and pharmacy records from 15,602 patients who received HIV medications through the Veterans Administration healthcare system between January 2006 and July 2012. Almost all were men, nearly half were black, more than 40% were white and the average age was 52 years. About two-thirds were diagnosed with mental health conditions and 40% with drug or alcohol use disorders.

At baseline, people in the single-tablet and multiple-tablet groups had similar CD4 cell counts (mean 432 cells/mm3). However, participants prescribed a single-tablet regimen were less likely to have undetectable viral load at baseline (42 vs 46%) and more likely to be treatment-naive (28 vs 13%).

Treatment response rates were high overall in both groups. But people taking a single-tablet regimen were significantly more likely than those on multiple-tablet regimens to achieve undetectable viral load during follow-up (64 vs 60%, respectively).

A significantly greater proportion of people in the single-tablet group achieved at least 95% adherence (75 vs 56%) and at least 80% adherence (90 vs 78%), as determined by pharmacy claims data (medication possession ratio).

People taking a single-tablet regimen were significantly less likely to have been hospitalised during follow-up compared with multiple-tablet recipients (27 vs 31%). They also took longer to be hospitalised and had fewer hospital stays (2.2 vs 2.7, respectively).

In a multivariate analysis controlling for other factors, people taking single-tablet regimen were twice as likely to be at least 95% adherent to treatment (odds ratio 1.98), were 31% less likely to be hospitalised (hazard ratio 0.69) and had 45% fewer hospitalisations (incidence rate ratio 0.56).

After the presentation, session moderator Pablo Tebas and others suggested that the results may be affected by 'channelling bias'. This could include preferentially prescribing boosted protease inhibitors for people with higher baseline viral load or those judged less likely to be adherent, as these drugs are generally more 'forgiving' of missed doses. Another example would be patients with pre-existing kidney disease – a group more likely to be hospitalised – not being put on tenofovir, which is included in all available single-tablet regimens.

"Healthcare providers and payers may see a benefit in improved medication-taking behaviour with ART using a single tablet compared to multiple tablets based on fewer hospital visits and other improvements in clinical outcomes," the researchers suggested in a press release issued by ICAAC. "These clinical outcomes could potentially decrease total healthcare costs in HIV patients."

This suggestion is supported by other studies of US Medicaid participants and commercially insured individuals which similarly found that people taking single-tablet regimens had fewer hospitalisations than those taking multiple pills. Another benefit in the US is that single-tablet regimens require only one prescription co-pay.