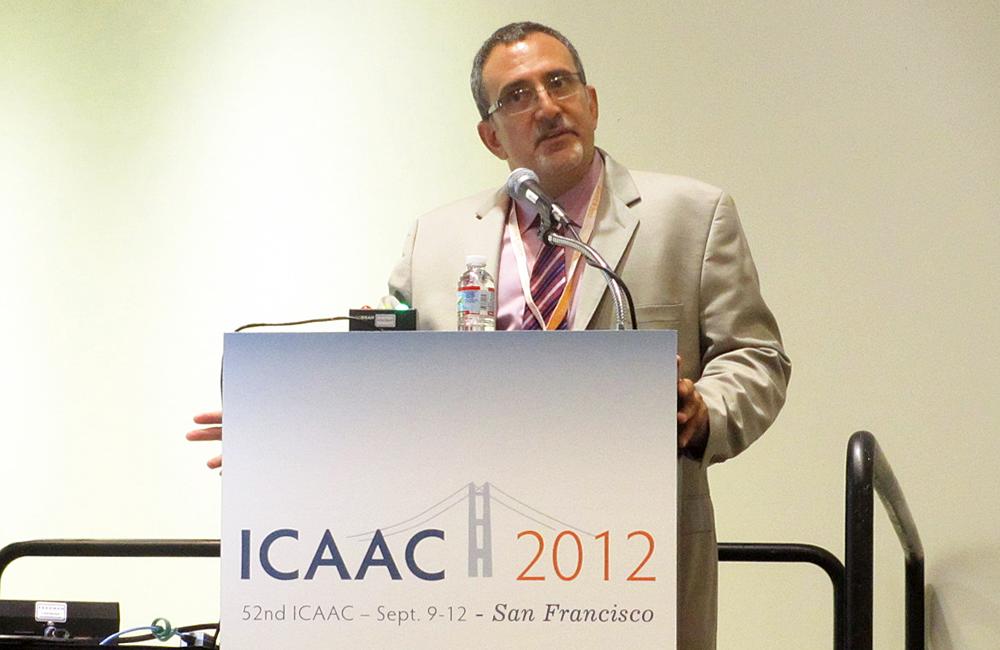 HIV/HCV co-infected people taking the experimental hepatitis C virus polymerase inhibitor sofosbuvir (formerly GS-7977) experienced a rapid decline in HCV viral load similar to that seen in HIV-negative patients, researchers reported on Wednesday at the 52nd Interscience Conference on Antimicrobial Agents and Chemotherapy (ICAAC) in San Francisco. Side-effects were also similar and there was no sign of interactions with antiretroviral drugs in this 14-day study.

Sofosbuvir is a once-daily nucleotide analogue HCV NS5B polymerase inhibitor active against multiple HCV genotypes. Studies of HIV-negative people with hepatitis C have shown that sofosbuvir alone or in combination with ribavirin or other direct-acting HCV drugs is well tolerated and has a high cure rate.

The study included 30 HIV/HCV co-infected people in Puerto Rico. About 80% were men, 57% were white, 43% were black and the average age was 53 years. About 75% had difficult-to-treat HCV genotype 1 (more than two-thirds with 1a), four had genotype 2, three had genotype 3 and one had the uncommon genotype 4.

Participants were on stable antiretroviral therapy for at least one month and all but one had undetectable HIV viral load. They had well-preserved immune function with a median CD4 cell count of 600 cells/mm3, a median CD4 cell percentage of 31%, and had had no opportunistic infections or other HIV complications during the past six months.

HCV viral load declined rapidly after starting sofosbuvir, falling by more than 2 log10 IU/mL during the first 24 hours. The median decline was more than 4 log10 IU/mL at the end of the seven-day dosing period. HCV RNA continued to drop for two days after stopping sofosbuvir, then began increasing, but did not return to the baseline level by the end of follow-up at 14 days.

On the last day of dosing, approximately 40% of participants had undetectable HCV viral load. This proportion approached 60% two days after stopping the drug and remained at about 15% on the last day of follow-up.

This pattern of decline was similar for all HCV genotypes, was generally consistent regardless of antiretroviral regimen and also matched viral kinetics seen in prior studies of HIV-negative patients with hepatitis C alone.

Black patients – who do not do as well on interferon-based therapy – responded as well as white patients to sofosbuvir. A comparison of responses according to participants' IL28B status was not presented, but Rossi said a large proportion of people in Puerto Rico have the unfavourable CC gene pattern and this analysis is forthcoming.

Sofosbuvir was generally well tolerated in this short study, with a safety profile similar to that of HIV-negative hepatitis C patients. All adverse events were mild to moderate, and no single side-effect was seen in more than one person. There were no treatment-emergent grade 3-4 laboratory abnormalities and no significant change in hematologic parameters– an important point as some HCV drugs can cause anaemia or neutropenia.

No evidence of HIV breakthrough was observed and all participants who started with undetectable HIV RNA maintained viral suppression. Four people experienced HIV viral 'blips', but these subsequently fell below the level of detection. There were also no clinically significant changes in absolute CD4 cell count or CD4 percentage.

Analysis of sofosbuvir interactions with antiretroviral therapy is underway, but the modest side-effects and lack of changes in HIV parameters suggests major concerns are unlikely.