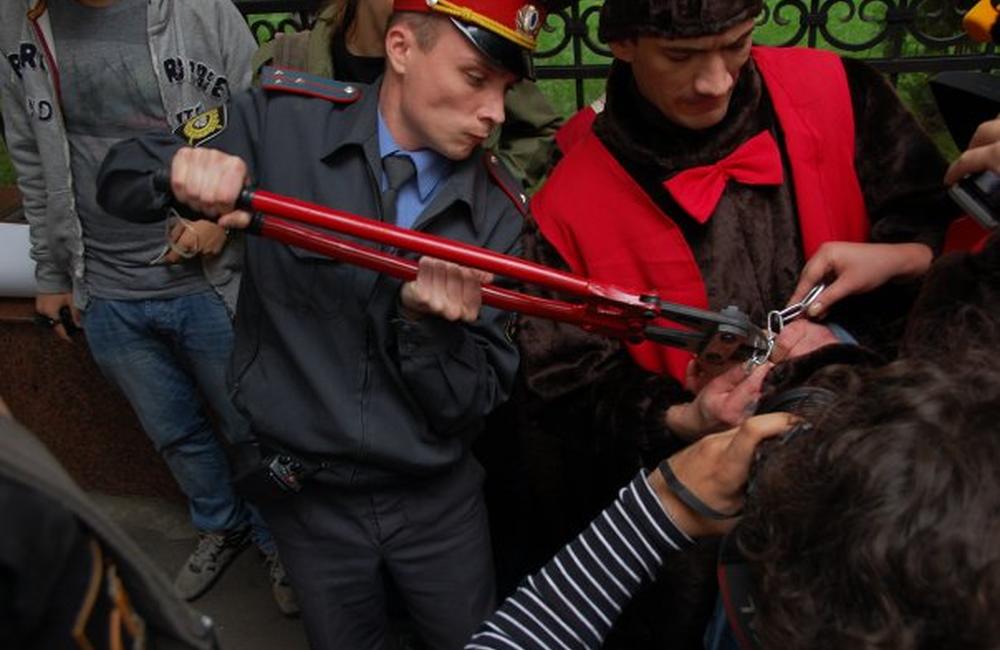 HIV treatment activists were arrested in Moscow this week following protests against stock-outs that have led to forced treatment interruptions across the Russian Federation. They say that less than 62,000 of the 120,000 patients who need antiretroviral therapy will receive it in 2010.

In Red Square on Wednesday, activists dressed as nurses held a man dressed as a bear on a leash. The nurses resembled the Russian minister of Health Tatyana Golikova, with the bear on a leash representing the need to stop the destruction of the ARV supply.

“This was meant to symbolise the farce that’s taking place within the Ministry of Health and Social Development,” organiser Alexandra Volgina said.

Yesterday activists in the same costumes chained themselves to the railings of the Ministry of Health building in Moscow. On both days, they were arrested and subsequently released.

Legal proceedings against the government with regard to stock-outs have already been initiated in Kazan, Moscow and Tula.

Activists allege that officials have proven unwilling or unable to arrange the timely supply of the essential drugs on which lives depend. “We people living with HIV are tired of inhumane treatment at the hands of officials,” said Alexandra Volgina. “We will not be held hostage to official incompetence or negligence, we have the right to live!” she continued.

In response to the protests, the Ministry of Health issued a press release denying that that there are stock-outs which prevent people from starting or continuing treatment.

Activists say that officials are lying.

Moreover, as part of a court case brought in the far northern city of Arkhangelsk by a person unable to access treatment, the city’s chief HIV clinician confirmed the shortages on Wednesday. Yelena Popova submitted detailed evidence of the applications and requests for ARVs that her hospital had made to the federal Ministry of Health and Social Development but which had been turned down.

Activists are calling on the government to transfer management of the ARV supply from the Ministry of Health to a more competent organisation, even the Ministry of Emergency Situations. Moreover drug provision should be based on scientific assessment of the number of people in need of treatment, prices should be re-negotiated on a regular basis and a reserve fund should be established to cover stock-outs.

The protests were organised by a coalition of individuals, activists and civil society organisations from across the country.

They say that people with HIV face a choice: to die quietly at home or to draw the attention of the media and the government.

What is happening to Persons Living With HIV as the pandemic continues to ravage the Philipines?

Community-Based Organizations Step Up to Confront HIV in Southern States

Four decades after the first cases of AIDS were reported, new data from UNAIDS show that dozens of countries achieved or exceed the 2020 targets set by the United Nations General Assembly in 2016—evidence that the targets were not just aspirational but achievable.
UNAIDS
3 Jun 21
Epidemiology

US: Hopeful signs of progress in HIV prevention, but gains remain uneven

New CDC data show new HIV infections fell 8% from 2015 to 2019, after a period of general stability in new infections in the U.S. Much of this progress was due to larger declines among young gay and bisexual men in recent years.
Centers for Disease Control and Prevention
28 May 21
More editors' picks