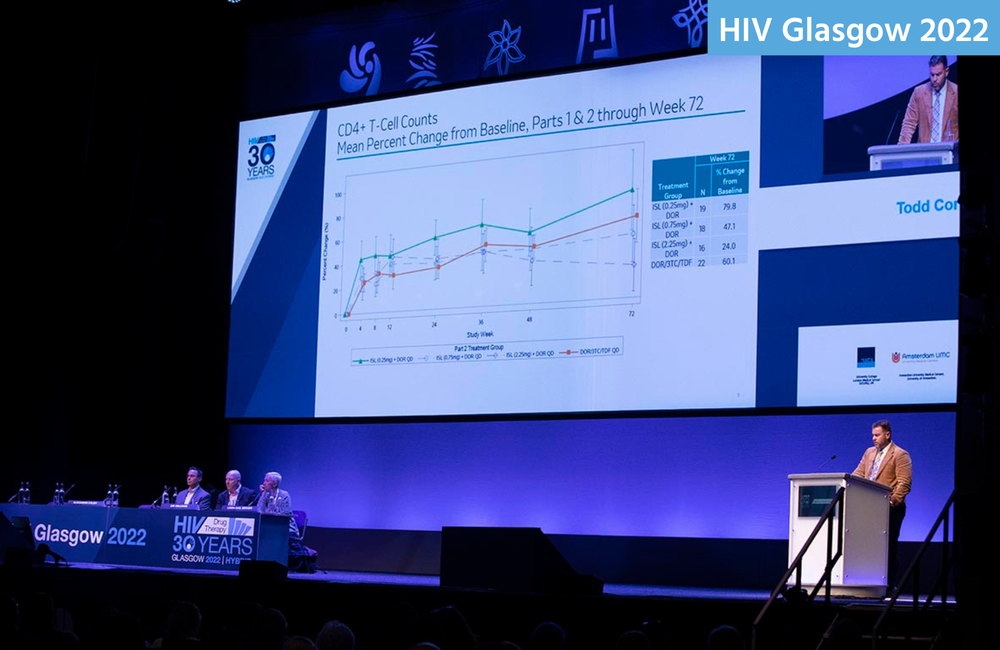 At  the International Congress on Drug Therapy in HIV Infection (HIV Glasgow) yesterday, the drug company MSD (Merck in the US) presented the first detailed data on the unexpected side effects of its first-in-kind anti-HIV drug, islatravir.

MSD showed that it should be possible to take a smaller daily dose of the drug – 0.25 milligrams (mg) – without it causing the falls in CD4 cell, B-cell and total lymphocyte (white cell) counts that halted its clinical development almost a year ago.

However, as MSD announced last month, the larger doses and novel formulations of islatravir that held out the promise of monthly or even yearly dosing – and of a revolution in HIV prevention – won’t now be developed.

Islatravir or MK-8591 is a drug of a new class called nucleoside reverse transcriptase translocation inhibitors (NRTTIs). Like the earliest HIV drug class to be developed, the NRTIs, it prevents HIV’s reverse transcriptase enzyme from copying its genetic instructions onto a length of DNA that is inserted into the genes of the host cell. But in addition to putting a STOP command into the DNA chain, it also breaks a link immediately preceding the STOP, thus preventing DNA assembly in two different ways.

Because of this, islatravir was expected to be both resistance-proof and extremely persistent in the body, allowing for monthly oral dosing and six-monthly or yearly dosing with an injection or implant.

However, clinical development was paused when the drug was found to be associated with falls in many types of immune-system cell, including all lymphocytes (white blood cells), the B-cells that make antibodies, the NK-cells, and the T-cells, both CD8s and CD4s, that regulate cellular immunity and that are attacked by HIV.

Data from the trials of islatravir

Todd Correll of Merck presented the details of the cellular side effects at the Glasgow conference.

Islatravir was being tested in a number of different clinical trials as both treatment and for prevention before they were paused, and oral doses ranged from 0.25mg as a daily medication to 120mg as a monthly one.

Falls in lymphocytes and CD4 cells, or at least lower rises than seen using comparator drugs, emerged at nearly all doses and were larger with larger doses. But it was hard to see exactly how the dose relationship worked in most studies, as only one dose was used.

However, there was one trial – the 011 study – which used three different dosing arms of islatravir plus a control arm not containing it, and this allowed a closer look at how the lymphocyte suppression varied with dose.

It was a dose-finding phase II study in people who has not previously taken antiretroviral therapy. At baseline they had to have an HIV viral load over 1000 and a CD4 count above 200. It compared three doses of islatravir – 0.25mg, 0.75mg or 2.25mg, with a comparator arm using tenofovir instead of islatravir. All were combined with MSD’s NNRTI drug doravirine plus, for the first 24 weeks, lamivudine.

That was what was supposed to happen anyway; although a few people have been in the study for as long as five years, the study was stopped for most participants before they reached week 144.

Because two of the three islatravir arms changed dose to 0.75mg, one from a higher dose and one from a lower dose, it is possible not only to compare the lymphocyte falls between arms, but also longitudinally within arms. This shows whether the effects seen on larger doses were permanent or reversible.

The 0.75mg dose was initially chosen in protocol 011 as the one to converge on – because it was thought the 0.25mg dose might not be effective in people with pre-existing NRTI resistance and particularly with the 3TC resistance mutation M184V/I.

But in fact the proportion of people whose viral load had fallen below 50 by week 48 was 90% on both the 0.25mg and the 0.75mg arms, and was in fact higher than the proportion seen in the highest 2.25mg dose (77%) or in the tenofovir arm (84%). This is fortunate as it implies no loss of efficacy on the lowest dose.

The fact that the effect was both dose-dependent and reversible was seen by comparing the data at week 72, when most people's islatravir doses changed, to the data at week 144, when they had all been on 0.75mg for 72 weeks.

In this study, even in the 2.25mg arm, the effect on CD4 cells was comparatively slight, and did not have clinical consequences. The rate of co-infections was no higher in any arm and the counts of other types of immune-system cells that are not white cells – red-blood cells, neutrophils and platelets – were not affected.

However, in a previous presentation, MSD’s Ryan Vargo showed that in a study, protocol 016, of monthly oral dosing of 60mg or 120mg per month, absolute falls in lymphocytes of 20-30% from baseline had been seen.

One important question is whether some people are more prone to the lymphocyte-suppressing effect of islatravir than others. So far, however, there appears to be no association with age, sex, ethnicity, body weight or any other characteristic of trial participants.

Continuing studies on the smallest dose

Vargo showed computer models that used the actual data seen to predict what should, on average, happen with different islatravir doses in a range of hypothetical studies.

The models had, as one of their inputs, the average change in lymphocyte and CD4 counts seen in a large number of switch studies of other HIV drugs in which people changed drug regimens. Typically, changes after switching ranging from a 5% decline to a 10% increase – so the 21% increase and 11% decline in lymphocyte counts seen when switching between different islatravir doses was clearly atypical.

From these models, however, MSD were able to predict that the lowest effective dose of 0.25mg – in both people new to treatment and treatment-experienced people switched to islatravir – should not produce significant declines in lymphocyte or lymphocyte-subset counts.

This dose is therefore being taken forward in re-started studies of daily treatment. MSD is also in discussion with Gilead with the idea of taking forward a study of weekly oral islatravir combined with Gilead’s capsid inhibitor lenacapavir (Sunlenca), but the dose has not yet been decided on.

MSD has two other drugs in early development it is hoping to take forward. One is MK-8507, an NNRTI like doravirine, but one more suitable for long-acting dosing. Initially, it looked as if MK-8507 might also be causing the falls in lymphocytes, but MSD believes the effect was misattributed and hopes to restart its development.

The other is MK-8527. This is an NRTTI like islatravir, currently in early phase I development. It has a similar mode of action and is also long-lasting, but it looks as if intracellular concentrations of it might not build up to such high levels.

This is important because although the exact mechanism is yet to be established, it looks as if islatravir’s lymphocyte-suppressing side effect is caused because it needs (like all NRTIs) to be phosphorylated (to have phosphate groups added to its molecule) in order to become biologically active in the cell. This may compete with phosphorylation needed for the cell’s own processes.

Todd Corell ended by assuring the audience at HIV Glasgow that the experience with islatravir had not dampened MSD’s motivation to press forward with developing new drugs of different classes that would be suitable for long-term dosing, and in particular with long-acting drugs for prevention.