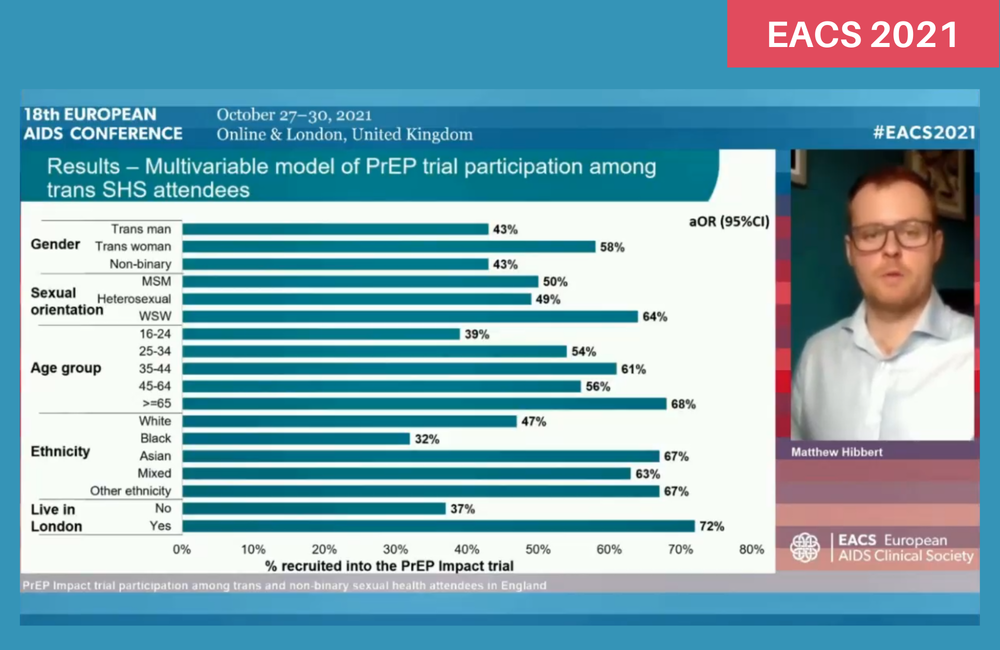 A study comparing HIV risk factors in trans and non-binary people who did, and did not, take part in the PrEP IMPACT study has found that just over half the people who attended sexual health services in England during the period of the IMPACT trial ended up participating in it.

Dr Matthew Hibbert of the newly founded UK Health Security Agency told the 18th European AIDS Conference (EACS 2021) that trans and non-binary people’s participation in PrEP IMPACT was in general related to people’s apparent degree of HIV risk. For instance, people who had been diagnosed with a bacterial sexually transmitted infection were much more likely to be recruited into the IMPACT trial than ones who had not.

IMPACT was a large PrEP implementation study, more fully described in another article. The vast majority of its 24,255 participants were cisgender gay and bisexual men, with smaller numbers of cisgender heterosexual men and women taking part. Concerted efforts were made by trans community advocates and the specialist sexual health service CliniQ in London to engage trans and non-binary people.

During October 2017 to February 2020 (all but the last five months of the IMPACT trial), 978 people who were recorded by GUMCAD, the UK’s STI surveillance system, as having a different gender to the one assigned to them at birth, attended a sexual health clinic.

Five hundred and one of these people (51%) joined the IMPACT trial: 58% of the trans women and 43% of both the trans men and the non-binary people.

Of the people who did not join IMPACT, the majority were not coded by the GUMCAD system as having a sufficiently high risk of HIV for a PrEP referral. However, 97 people (20%), though categorised as eligible, were not prescribed PrEP. In a minority of cases (22 people), PrEP was offered but declined, but this left 75 people who should have been offered PrEP but seemingly were not.

The median age of the trans and non-binary people who joined the IMPACT trial was 30 and of the people who did not, 27. A smaller proportion of the under-25s (39%) joined the trial than any other age group. In contrast, 61% of those aged 35-44 joined the trial and 68% of the small number of people aged 65 or older.

Of people of White ethnicity, 47% joined IMPACT. A smaller proportion of Black people (32%) joined the trial and a higher proportion of Asian people (67%). Matthew Hibbert reflected that this might be influenced by the relative acceptability of trans identity in different cultures.

The biggest disparity in trial enrolment was geographical. Nearly three-quarters of those living in London (72%) joined the trial but half as many (37%) living elsewhere.

Matthew Hibbert commented that only 178 of the 94,885 people living with diagnosed HIV in England (0.19% or one in 533 people with HIV) were identified as trans or non-binary on clinical records. This was a far lower HIV prevalence than that seen in other studies.

There were several possibilities that might all contribute, he went on to say. HIV risk and incidence in trans people might indeed be lower in a country like the UK where trans people are not so stigmatised that they have to resort to risky activities like survival sex in order to live. On the other hand, current ways of recording and estimating the number of people in clinics with trans or non-binary identity may considerably underestimate the true figure.

The lower PrEP uptake of people living outside London may be evidence that trans people may only come forward and receive appropriate services in places where they feel safe and their needs understood, he added.