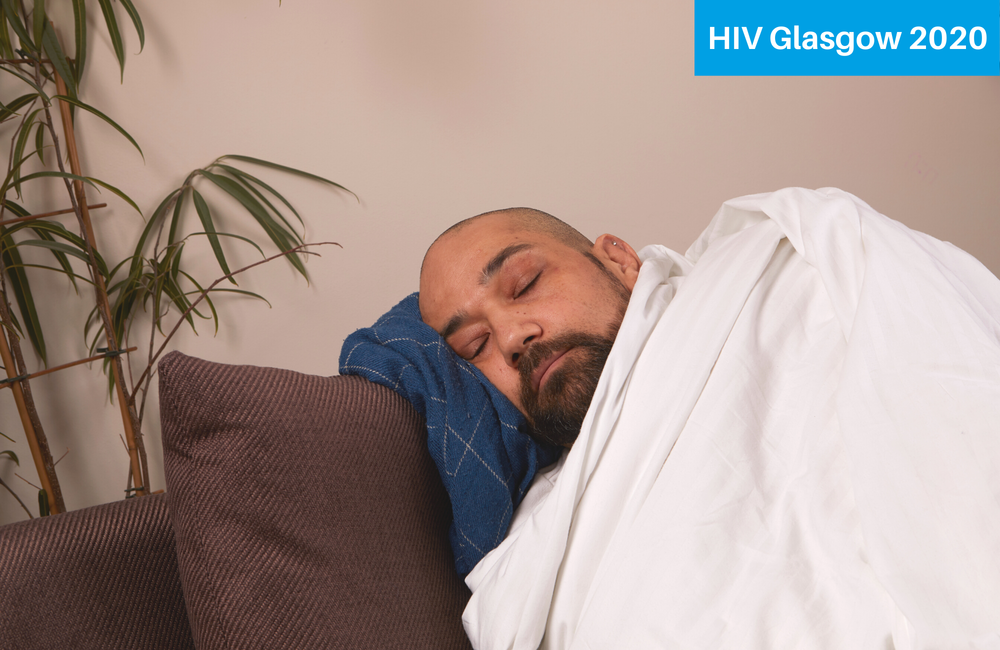 A poster at the virtual HIV Glasgow 2020 conference has concluded that a questionnaire on sleep quality, validated in other disease areas, appears to be reliable, simple and convenient for assessing sleep disturbance in people with HIV. The study also concludes that providing information on sleep hygiene and switching antiretrovirals when necessary can significantly improve sleep disturbance in people with HIV, including among those going through mental health issues.

Despite successful antiretroviral therapy, with a suppressed viral load and a high CD4 cell count, people living with HIV often complain of poor functional outcomes, including sleep disturbance. Dr Benjamin Goorney and his colleagues from the Salford Shine Sexual Health Clinic in Greater Manchester assessed the use of a known and validated tool to select patients who needed support.

The tool assessed by the study is called the Pittsburgh Sleep Quality Index, or PSQI. It is a self-report questionnaire that explores sleep quality over a one-month interval, with 19 self-rated questions and five additional ones for the bed partner or roommate, if any.

The questionnaire focuses on sleep habits with items such as: “During the past month, how many hours of actual sleep did you get at night? – this may be different from the number of hours you spend in bed.” Then it addresses more specific components of sleep quality by asking patients to score:

A total score of six or more (out of a maximum of 21) indicates significant sleep disturbance.

Forty patients attending the Salford Shine Sexual Health Clinic for routine HIV blood monitoring were selected for PSQI assessment, of whom 37 (92.5%) had a high global score of ≥ 6. These 37 patients were all provided with:

In total, 15 patients (41%) agreed to switch to alternative antiretroviral regimens.

The PSQI was repeated at least one month following either intervention.

The overall mean PSQI score was 12, which is understood as moderately severe sleep disturbance.

Participants aged between 40 and 50 years had greater sleep disturbances than those aged over 50 years, although this difference was not statistically significant. In terms of mean PSQI score, no difference was found for gender, ethnicity or duration of being HIV positive.

Past or current mental health issues (affecting 60% of patients, with a mean PSQI of 13.45) and taking antidepressants/antipsychotics (46%, PSQI 14.82) were strongly associated with sleep disturbance. In patients not facing such problems, the PSQI were 9.6 and 10.45, respectively. Sleep disturbance was also greater in patients with a recent STI (PSQI 13.5 vs 12 in those without), as well as in patients who had used recreational drugs (PSQI 13.6 vs 11.8). However, these differences were not statistically significant.

Results were similar in the 22 patients with mental health issues or taking antidepressants/antipsychotics.

Find out more: Sleep and HIV

Beyond concluding that the PSQI questionnaire appears to be an appropriate tool for assessing sleep disturbance in people with HIV, the investigators highlight that over 90% of the selected patients had a PSQI score of ≥ 6, indicating significant sleep disturbance. They also note the high rate of antidepressant/psychotic use in this group, which turned out to be strongly associated with sleep disturbance.

The efficacy of the package of intervention brings Goorney and colleagues to recommend wider routine assessment of sleep disturbance among people living with HIV. They also highlight that their recommendation is “in line with UNAIDS’ ‘fourth 90’, of 90% improvement in good health related quality of life.”

Taking dolutegravir in the morning may avert insomnia

Switching from efavirenz to lopinavir/ritonavir has no meaningful impact on neurological function, says UK study

Incidence of obstructive sleep apnea (OSA) has increased in people living with HIV (PLWHIV), particularly in those over 50 years of age who have other comorbidities such has obesity, restless leg syndrome, lipodystrophy, and peptic ulcer disease, according to research presented at IDWeek, held virtually from October 21 to 25.
Infectious Disease Advisor
29 Oct 20
Quality of life

Sleep Abnormalities Do Not Reverse After Discontinuing Efavirenz

For patients with HIV receiving efavirenz-based therapy, sleep and neuropsychological abnormalities do not readily reverse after discontinuation of treatment, according to results published in HIV Clinical Trials.
Infectious Disease Advisor
14 Jan 19
Sleep

In San Francisco, Amerson has seen evidence of a bed bug epidemic. Many of her HIV patients at San Francisco General Hospital live in densely-populated areas of the city and in large apartment complexes. “Once one apartment has bed bugs, the whole building has it. They’re very challenging to get rid of, and it’s a huge problem.”
BETA blog
18 Nov 15
Side effects

Am I mad or is it the meds?

It’s 00:50 and once again I can’t sleep. My insomnia has kept me up for the best part of three days in a row now, my mind is tired, my body is exhausted and yet I still can’t sleep.
UK Positive Lad (blog)
7 Jun 13
More editors' picks