Falling diagnoses seen in nearly all groups and all areas: late diagnosis in older men still a challenge though
Gus Cairns 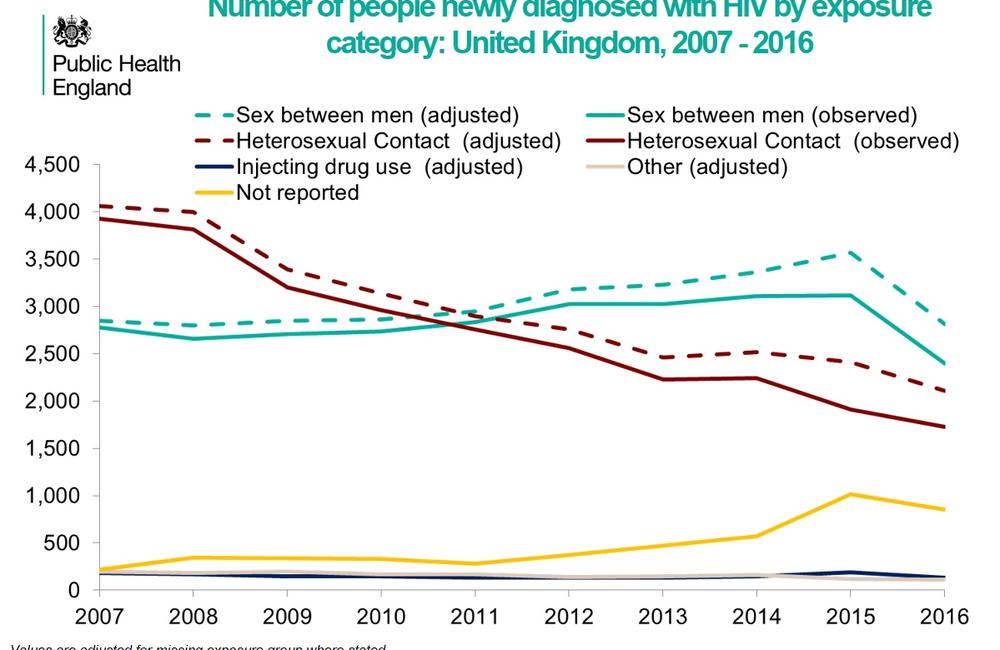 The 2016 HIV surveillance figures released by Public Health England (PHE) today reveal that what has already been reported for specific clinics and at conferences is true nationally: HIV diagnoses in gay men last year fell significantly for the first time throughout the UK since antiretroviral therapy started becoming available 20 years ago. This forms part of an overall picture of an across-the-board 18% decline in diagnoses in 2016.

The PHE figures reveal that HIV diagnoses are in retreat in virtually all groups, even in ones where until recently there appeared to be a continuing upward trend.

Decreases have been particularly pronounced in London, with a 23% decline among all populations and a 29% decrease in gay men in the last year. However, there have been declines in all areas of the UK in the last year, though they vary from area to area: 31.5% (among all groups) in Wales, 17% in the East Midlands, 16% in Scotland, but only 8% in Yorkshire and the North of England. The overall decline in infections in gay men outside London was 11%.

Heterosexual infections have been declining in London and elsewhere since 2005. This has been largely due to the impact of lower immigration from high-prevalence countries, with less ongoing transmission amongst first-generation members of the UK-born African community also important.

UK diagnoses among women born in the rest of the EU, however – most of them not of African ethnicity – increased 31% between 2005 and 2015. However, they too fell by 9.5% last year. Diagnoses actually rose among men born in southern Africa and women from Asia – but these formed a tiny proportion of the total and the increases look like insignificant variations in a largely flat trajectory of diagnoses.

The decrease in diagnoses among gay men varies by age. Diagnoses in men aged 35-49 peaked in 2007 and have declined by 28% since then, though some of these diagnoses are among heterosexual Africans. However, infections among men younger than 35 appeared to be on a remorselessly upward curve until 2015, but fell by 25% last year – and most of these will be infections in young gay men.

This appears to be at odds with the assumption that we are catching more early infections and have diagnosed most chronic ones. Certainly the trend in London gay men is different, with an increase in average CD4 count at diagnosis from 396 cells/mm3 in 2015 to 501 cells/mm3 in 2016. However, there is still a high number of men, many of them older heterosexual men, getting diagnosed with low CD4 counts: in men over 50, 60% were diagnosed with CD4 counts below 350 cells/mm3.

This has a real impact on mortality. The death rate in the first year after infection in people diagnosed with a CD4 count below 350 cells/mm3 was 7% in people aged 50-64, over ten times the rate in people in that age group diagnosed at higher CD4 counts, and also nearly ten times the mortality rate in 25-34 year olds diagnosed with low CD4 counts. In fact, diagnosis with a CD4 count under 350 cells/mm3 increased the risk of dying in the first year after diagnosis tenfold in all groups but the over-65s.

In contrast, three figures are higher than ever: the number of gay men testing and therefore diagnosed, the proportion of diagnosed people in care, and the proportion virally suppressed.

This 86/96/96 treatment cascade implies that 79.5% of all people with HIV in the UK are virally suppressed and therefore non-infectious. This is probably a sufficient explanation for why HIV diagnosis rates are falling in all areas and nearly all groups, though it should be noted that it has taken a big increase in consistent testing in gay men, undoubtedly due in part to the availability of pre-exposure prophylaxis (PrEP), as well as the maintenance of extraordinarily high levels of successful treatment, that have led to this very welcome situation.

PHE comments: “Combination prevention is working: the decline is driven by large increases in HIV tests among gay and bisexual men attending sexual health clinics (from 37,224 in 2007 to 143,560 in 2016), including repeat testing in higher risk men, as well as improvements in the uptake of ART [antiretroviral therapy] following HIV diagnosis.”