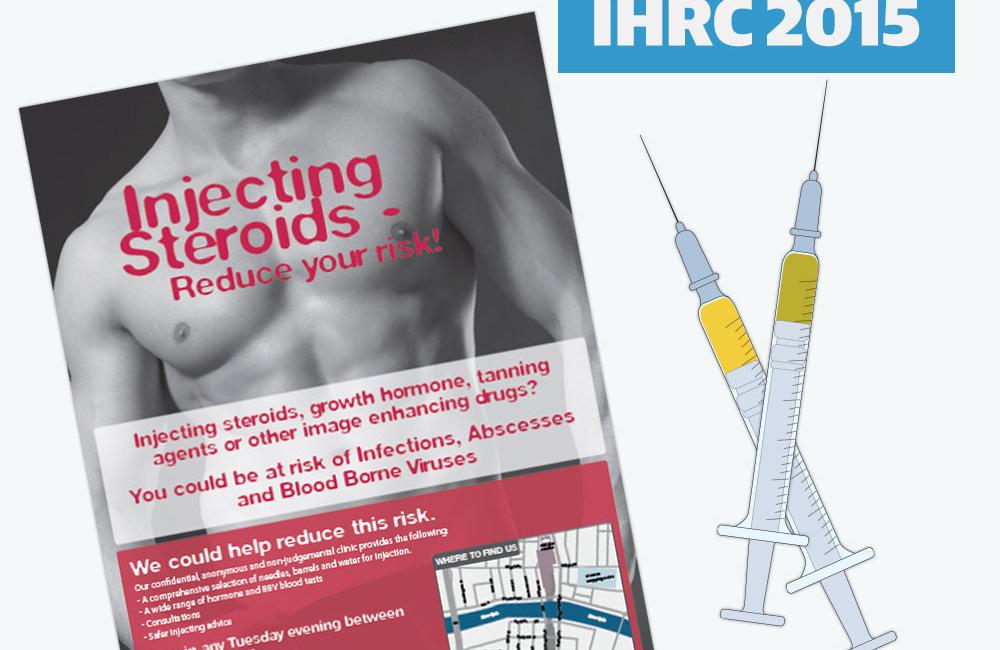 Image from presentation by John Campbell, at IHRC 2015.

The numbers of people injecting steroids and other image-enhancing drugs has increased significantly in the last decade and harm reduction services need to develop new skills if they are to help people using these drugs avoid blood-borne viruses, the 24th International Harm Reduction Conference in Kuala Lumpur was told on Wednesday. Surveys in the United Kingdom suggest that rates of HIV and hepatitis infections are significantly higher in people using these drugs than in the general population.

The issue has been best documented in high-income countries (the conference presentations came from the UK and Australia), but some experts believe that this is likely to be a global phenomenon – for example, some of those using SIEDs in the UK were born in Eastern Europe and South-East Asia.

In both the UK and Australia, those using the substances are typically young men (around half are in their twenties). Most are heterosexual, but between 3 and 7% report sex with other men. Typically, they have limited experience of injecting drugs and tend not to use psychoactive drugs (except for cocaine, taken nasally). Nonetheless, both the UK and Australian surveys suggest that people using SIEDs are conscious of the risks of sharing equipment (4% and 2% respectively had ever re-used another person’s needle).

People using these drugs are described as being ‘thirsty for knowledge’, but often seek this out on online forums where the information is not always accurate.

In contrast, in surveys of people using SIEDs in Queensland and New South Wales (Australia), 0.5% of people using SIEDs were HIV-positive. This is considerably higher than in the general heterosexual population of Australia (around 0.04%) but lower than among people injecting other drugs (2%) or gay men (8 to 12%). A larger number (5%) had antibodies to hepatitis C.

Given the elevated rate of HIV infection, the UK researchers argue that prevention work with people who use SIEDs needs to address sexual risks as well as injecting practices. In their surveys, around half of people who use SIEDs have multiple sexual partners but a similar proportion has never used a condom.

John Campbell of NHS Greater Glasgow & Clyde outlined how his needle and syringe programme had adapted to the needs of this group. The injecting equipment and techniques are distinct from those used by people who inject heroin, as steroids and image-enhancing drugs are injected into muscle or skin (rather than a vein).

A specialised service (one evening a week) has been mostly promoted through word of mouth recommendations. Black market steroid dealers have been more helpful in raising awareness of the service than the staff of local gyms.

Last year in the Greater Glasgow area, 3339 individuals who injected SIEDs attended a needle exchange, in contrast to 7670 who inject heroin. Whereas people who use heroin may attend several times a week, people who use steroids typically come in much less frequently. They usually pick up large quantities of equipment to cover a cycle of steroid use and often take material to pass on to friends. The infrequent visits mean that these are relatively rare opportunities for education around safe use.

Advice is not limited to avoiding blood-borne viruses – many people have limited understanding of how the products work and what side-effects and harms they should expect. An important aspect of the service is to offer blood tests and give advice on the often abnormal kidney, liver, cholesterol, testosterone and oestrogen levels that a person may have.

In Australia, Jenny Iversen said that different states have taken different approaches. Queensland’s policy on needle and syringe programmes explicitly states that people using SIEDs are a key group that the services must reach, with the aims of preventing new infections and of preventing injecting-related injuries. Educational materials for people using these products have been created.

In contrast, New South Wales – where the patterns of use of SIEDs are very similar – has chosen to limit the supply of equipment to this population, judging them not to be at sufficiently high risk of viral infections to warrant ongoing provision. Costs and a different financial system to Queensland appear to be the main reason for the restrictions.

There is a “need for targeted harm reduction interventions to address the sexual health and drug use risks among those injecting image and performance-enhancing drugs,” concluded Vivian Hope of Public Health England.

For harm reduction information on this issue, please visit www.ipedinfo.co.uk