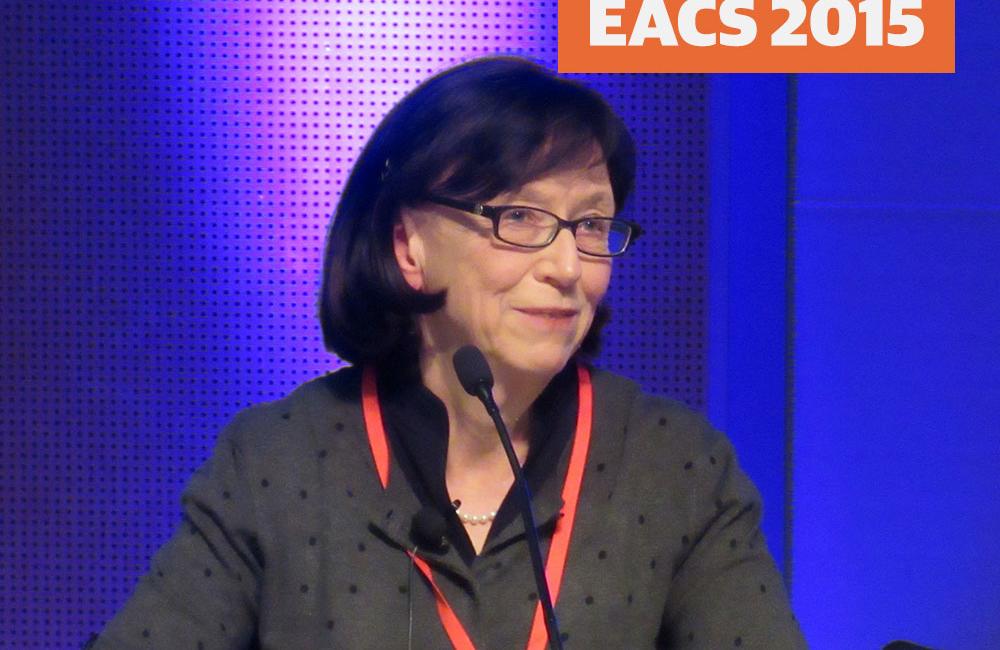 Kathleen Mulligan, presenting at EACS 2015. Photo by Liz Highleyman, hivandhepatitis.com
This article is more than 7 years old. Click here for more recent articles on this topic

Young men participating in a pre-exposure prophylaxis (PrEP) demonstration project experienced modest but significant bone loss after starting Truvada, according to findings presented yesterday to a joint session of the 15th European AIDS Conference and the 17th International Workshop on Co-morbidities and Adverse Drug Reactions in HIV.

Presenter Kathleen Mulligan of the University of California at San Francisco reported that bone mineral density (BMD) declines were seen in men who had tenofovir blood levels shown to be highly protective against HIV infection; in contrast, bone density increased in men with undetectable drug levels, as expected for young men of their age.

Tenofovir disoproxil fumarate (Viread, also in several single-tablet regimens) is one of the most widely used antiretrovirals, and the Truvada (tenofovir/emtricitabine) coformulation is increasingly used for HIV prevention. The iPrEx study showed that daily Truvada reduced the risk of HIV infection by 92% among gay men with measurable blood drug levels.

Tenofovir is considered to be generally safe and well-tolerated, but it is known to cause a small amount of bone loss soon after starting therapy. Bone loss has been seen in HIV-positive adults taking tenofovir-containing antiretroviral therapy and in infants exposed to tenofovir during gestation. Tenofovir-related bone loss has not yet been studied extensively in HIV-negative people or in adolescents and young adults – the age at which peak bone density occurs.

This analysis looked at bone density changes among participants in ATN 110, an open-label demonstration project investigating the safety and feasibility of PrEP for young gay men age 18-22 years. Results of the main study were presented at the International AIDS Society Conference this summer.

Bone mass generally peaks during early adulthood – typically around age 20 – after which it begins to gradually decline. Peak bone mass is an important predictor of fracture risk later in life, Mulligan noted as background.

ATN 110 enrolled 200 at-risk HIV-negative young men who have sex with men in 12 US cities. The median age was 20 years, nearly half were African American and about a quarter were Latino. Overall body weight was normal, but with a wide variation (median body mass index 23.6; range 17.3-58.9 kg/m2).

All participants were offered PrEP using once-daily Truvada for 48 weeks, along with a full package of HIV prevention services including risk reduction and adherence counselling, testing and treatment for sexually transmitted infections and free condoms. Drug levels were measured throughout the study and dosing frequency was estimated based on tenofovir concentrations in dried blood spots.

The bone sub-study performed dual X-ray absorptiometry (DXA) scans of the hip, spine and whole body at baseline and at weeks 24 and 48. The four participants who became HIV-positive during the study were excluded from the bone analysis.

Bone mineral density levels were lower than expected at baseline, falling below norms for age and race/ethnicity; 8.1% of participants had spine BMD, 6.1% had hip BMD and 3.7% had whole body BMD below standard international thresholds for low bone mass. Mulligan noted that low bone mass has previously been reported in other studies of at-risk HIV-negative men.

At week 24 after starting Truvada, bone density decreased at the spine (by about -0.2%), hip (by about -0.4%) and whole body (by about -0.8%), with the latter two changes being statistically significant. At 48 weeks, hip BMD continued to decrease steeply (falling by about -1.0%) and whole body BMD further decreased by a small amount, but spine BMD started to increase and in fact rose above the baseline level.

Z-scores – a measure of deviation from the norm for people of the same age and race/ethnicity – decreased for the spine, hip and whole body at both week 24 and week 48; all these changes were significant.

The researchers then looked at the relationship between bone loss and tenofovir concentrations in dried blood spots. More than half of participants had drug levels shown to confer a high level of protection – indicating that Truvada was taken at least four times a week – for the first 12 weeks. Adherence declined over time, however, and by week 48 only about a third of participants still had highly protective drug levels.

This allowed the researchers to compare bone density changes between men who had highly protective tenofovir levels and those with lower levels, showing that bone loss at the spine and hip through week 48 was correlated with tenofovir exposure.

Mulligan noted that differences in bone loss between men who took Truvada seven days a week and those who took it four times a week were not significant, so it is not clear whether taking PrEP less often – perhaps using an intermittent or 'on demand' dosing schedule like the one used in the Ipergay study – would be protective against bone loss.

Looking at bone fractures, about a quarter of participants reported that they had sustained fractures prior to the study. During the study period, five participants experienced eight fractures, all due to trauma (slamming fingers in a door, a vehicle accident, a fall and a fight). None of the men with fractures had Z-scores indicating low bone mass.

"Although the BMD losses were generally modest, their occurrence before attainment of peak bone mass in young men who already have low bone mass may increase their risk of fragility in adulthood," the researchers concluded.

In response to an audience question, Mulligan said there was "very little evidence" of kidney toxicity among PrEP recipients, with very few cases of protein or glucose in the urine and little change in serum creatinine.

The study will continue to follow participants for a year to determine whether bone loss is reversible after stopping Truvada.