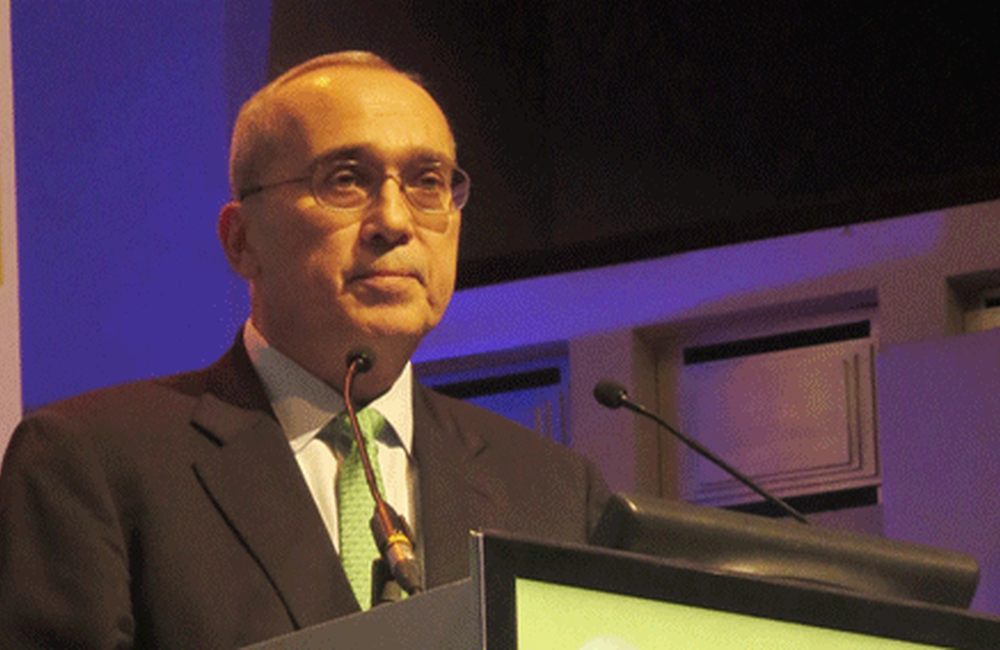 Douglas Dieterich at EACS 2013. Photo by Liz Highleyman, hivandhepatitis.com
This article is more than 9 years old. Click here for more recent articles on this topic

Adding the direct-acting hepatitis C drug simeprevir to pegylated interferon and ribavirin produced high response rates for HIV-positive people co-infected with HCV genotype 1, researchers reported at the 14th European AIDS Conference this week in Brussels. Particularly impressive was a 57% sustained response rate for prior null responders. Another study showed simeprevir to be active against HCV genotype 4 in mono-infected patients.

The advent of direct-acting antivirals has brought about a new era of treatment for hepatitis C. These drugs will ultimately be used in all-oral regimens but those approved first will initially be used as add-ons to standard therapy with pegylated interferon/ribavirin.

Douglas Dieterich of Icahn School of Medicine at Mount Sinai in New York presented late-breaking findings from the C212 study evaluating triple therapy with simeprevir for HIV/HCV co-infected patients. Co-infected people experience more rapid liver disease progression and do not respond as well to interferon-based therapy as HIV-negative people with hepatitis C alone, so there is an urgent need for better therapies.

Simeprevir (formerly TMC435) is a once-daily HCV NS3/4A protease inhibitor discovered by Medivir and being developed by Janssen. Prior studies in treatment-naive and previously relapsed HCV mono-infected patients showed response rates around 80%.  It is currently under review by European and US regulatory authorities, with US approval expected by the end of this year.

This international phase 3, open-label trial evaluated the safety and efficacy of simeprevir in 106 HIV-positive people with genotype 1 chronic hepatitis C. Most (85%) were men, 82% were white, 14% were black and the median age was 48 years.

Nearly 90% were on antiretroviral therapy (ART), almost all with undetectable HIV viral load, and the median CD4 cell count was 429 cells/mm3. Simeprevir is metabolised by the CYP3A4 enzyme and preclinical studies showed it can interact with certain antiretrovirals. In this study, patients were not permitted to use HIV protease inhibitors or efavirenz (Sustiva). Most (87%) were on raltegravir (Isentress) and almost all took nucleoside/nucleotide reverse transcriptase inhibitors.

Turning to hepatitis C factors, just over 80% had HCV subtype 1a, which is harder to treat than 1b. Just over one-quarter had the favourable IL28B 'CC' gene variant associate with good interferon responsiveness. Fibrosis was absent to moderate (METAVIR score F0-F2) in 42% whilst 21% had advanced fibrosis or cirrhosis (F3-F4).

All participants received 150mg once-daily simeprevir plus pegylated interferon alfa-2a (Pegasys) and ribavirin for 12 weeks. People never before treated for hepatitis C and those who had relapsed after a prior course of interferon and who did not have cirrhosis were eligible for response-guided therapy (RGT). Those with good response at weeks 4 and 12 continued on pegylated interferon/ribavirin alone for 12 more weeks whilst the rest did so for 36 more weeks. More difficult to treat patients – prior partial responders, null responders and people with cirrhosis – all stayed on pegylated interferon/ribavirin through to week 48.

Dieterich reported results from the primary analysis, with all participants either reaching 12 weeks of post-treatment follow-up or dropping out prematurely. Sustained virological response (SVR) or continued undetectable HCV RNA at 12 weeks after completing treatment (SVR12) is considered a cure.

Overall, 66% of participants experienced rapid virological response (RVR), or undetectable HCV RNA at week 4, and 84% were undetectable at the end of treatment.

Most eligible participants (89%) met the RGT criteria and were able to stop all treatment at week 24. Within this group, the SVR12 rate was 87%.

People with HCV subtype 1b were more likely to achieve SVR12 than those with 1a (89 vs 71%), with an even lower rate (67%) for 1a patients with the Q80K NS3 resistance mutation at baseline.

People with advanced fibrosis or cirrhosis did not respond as well as those with mild-to-moderate liver disease, with overall SVR12 rates of 80 and 64%, respectively. The difference appeared particularly striking for treatment-naive people (89 vs 57%), but Dieterich noted that patient numbers were small in the breakdown according to prior treatment status.

Dieterich was asked to show some back-up slides, revealing that response was better for people with low baseline HCV RNA levels (<800,000 IU/ml) compared to those with higher viral load: 93 vs 70%, respectively; among null responders the corresponding figures were 100 and 54%, but again numbers were small.

IL28B status also had an effect, with 96% of those with the favourable 'CC' variant, 68% with the intermediate 'CT' variant and 61% with the least favourable 'TT' variant achieving SVR12. Finally, people on ART responded better than those with untreated HIV: 75 vs 62%, respectively.

Looking at treatment failure, 17% overall experience HCV virological failure whilst still on treatment, ranging from 0% for prior relapsers to 39% for null responders. Post-treatment relapse was uncommon at 9% overall; two prior relapsers (13%) relapsed again, as did two prior null responders (7%). All but one relapse occurred amongst people with genotype 1a. Most of these patients who underwent resistance testing (79%) had emergent resistance mutations, mostly R155K alone.

In addition, two individuals (2%) experienced loss of HIV viral suppression, but this happened 12 weeks after completion of hepatitis C treatment and is not thought to be related.

Simeprevir triple therapy was generally safe and well tolerated, with adverse events similar to those seen in HCV mono-infected people in other studies. Overall adverse events were common, as is typical for regimens containing interferon and ribavirin. There were six serious adverse events, of which four led to simeprevir discontinuation. The most common side-effects were fatigue (41%), headache (28%), nausea (26%), neutropenia (28%), anaemia (21%), itching (20%) and rash (17%).

Simeprevir once daily plus pegylated interferon/ribavirin for 12 weeks "led to high rates of SVR12 in HCV genotype 1/HIV-1 patients regardless of prior HCV treatment response", the researchers concluded. "SVR12 rates were high, regardless of baseline METAVIR fibrosis score or HCV genotype 1 subtype."

These findings, Dieterich said, support the trend that "SVR rates for HIV-positive people seem similar to [those for] HIV-negative people in the new world of direct acting antiretrovirals." He added that it is good to finally have "true antivirals" for hepatitis C, as HIV clinicians have had for a long time.

Noting that people on antiretroviral therapy responded better, Dieterich said that even if co-infected patients don't need ART according to CD4 count, "I want them on it during hepatitis C treatment because we want as many good-quality CD4 cells as possible."

In a related presentation during the same session, Christophe Moreno of Hôpital Erasme in Brussels reported interim findings from the Phase 3 RESTORE study of simeprevir triple therapy for HCV monoinfected people with genotype 4.

Although genotype 4 is most prevalent in the Middle East and Africa – where it accounts for more than 80% of cases – it is increasingly found in Europe and has been seen in outbreaks of presumed sexually transmitted acute HCV infection amongst HIV-positive gay men. Like genotype 1, genotype 4 is considered difficult to treat, but it has not been as extensively studied.

This open-label, single-arm multicentre study included 107 participants. Most (79%) were men, 72% were white, 28% were black and the median age was 49 years. A majority (57%) had absent-to-moderate fibrosis, but 14% had advanced fibrosis and a high proportion – 29% – had cirrhosis. About one-third had never been treated for hepatitis C, 21% were prior relapsers, 9% were prior partial responders and 37% were prior null responders.

Treatment regimens were similar to the genotype 1 study described above. All participants received 150mg once-daily simeprevir plus pegylated interferon and ribavirin for 12 weeks, with pegylated interferon/ribavirin alone continued through to week 24 or 48 based on response-guided therapy for naives and prior relapsers.

Sustained response data were incomplete as the study is ongoing and most people had not yet reached post-treatment follow-up milestones. Amongst the 19 participants evaluated four weeks after completing treatment, 91% of treatment-naive patients and 90% of prior relapsers achieved SVR4. Amongst the nine people who reached 12 weeks post-treatment, SVR12 rates were 100 and 67%, respectively.

Again, simeprevir triple therapy was generally safe and well tolerated with most side-effects consistent with interferon use. There were four serious adverse events (deemed probably unrelated to simeprevir) including one leading to simeprevir discontinuation.

"Results of this interim analysis support the potential utility of simeprevir 150mg once daily for 12 weeks in combination with peginterferon/ribavirin in treatment-naive and -experienced subjects with HCV genotype 4 infection," the researchers concluded.

Although these findings are still preliminary and include few patients so far, they suggest that simeprevir will be an option for HCV genotype 4 as well as genotype 1.