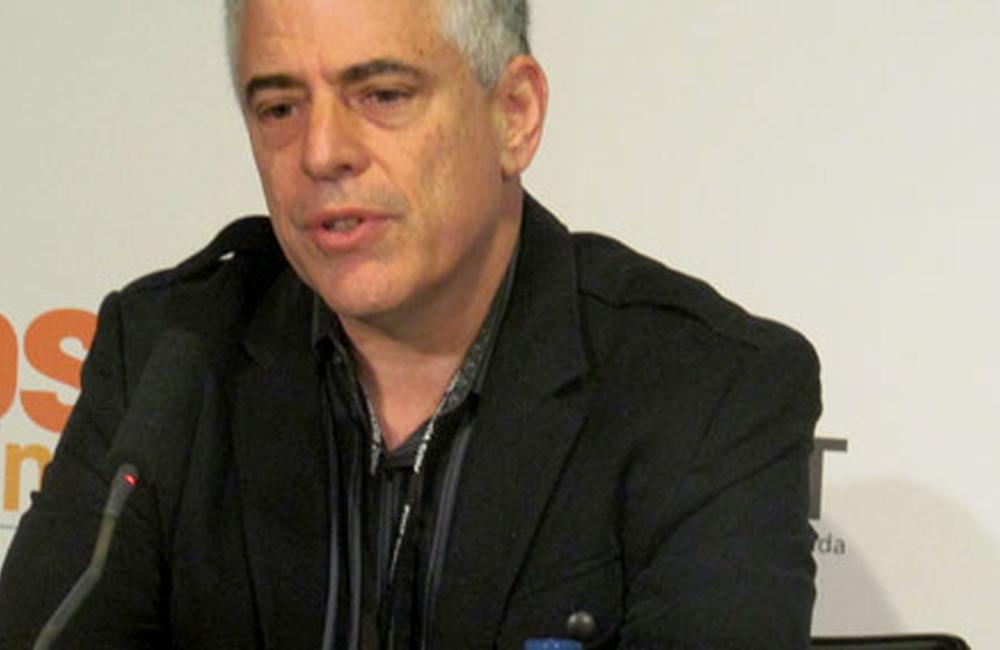 Louis Picker speaking at the AIDS Vaccine 2013 Conference.
This article is more than 9 years old. Click here for more recent articles on this topic

Four dozen rhesus monkeys may have successfully fought off the monkey equivalent of HIV in a series of trials of what looks like the most powerful candidate vaccine for HIV to date.

But exactly as many of the monkeys did not respond to the vaccine, and the researchers are pondering how to turn a vaccine that’s powerful for some into one that works for all – without turning it into something harmful.

The findings of this study were published in Nature last month,[ref] and updated findings were presented by principal investigator Louis Picker at AIDS Vaccine 2013 on 8th October.[ref]

The RhCMV/SIV vaccine contains sections of the rhesus monkey (Rh) equivalent of HIV, simian immunodeficiency virus (SIV), encapsulated inside the shell of a monkey version of cytomegalovirus (CMV), a near-ubiquitous virus of the herpes family.

It works like a mock infection. The shell of one virus – a vector - is used to infect cells with instructions for making proteins that belong to another virus. These SIV proteins, lacking crucial components, can’t in themselves cause an infection, any more than a disassembled car can start. But they do alert the immune system so that when the real infection comes along, it is immediately recognised and contained.

The bit of the immune system that vaccines like this engage is the cellular immune system – specifically, the CD8 cells. If CD8 cells can be sensitised by the vaccine, they will kill off cells infected by the real virus, should it arrive.

Unlike a conventional vaccine that stimulates the other, antibody-based, arm of the immune system, a CD8 vaccine won’t necessarily completely stop an infection. Instead, it will contain it – corralling off and neutralising the cells subverted by the invading virus.

HIV vaccines stimulating cellular immunity aren’t new. But until now their performance in human trials has been disappointing. A previous vaccine that used a viral vector in humans, the STEP trial, may actually have increased some people’s vulnerability to HIV.

The exciting aspect of this CMV-based vaccine is that for the first time we have seen a vaccine take action to the point of eliminating infected cells entirely.

The CMV-based vaccine appears to be more powerful because it alerts a different subset of immune cells to previously tried vaccines. These are the ‘effector-memory’ cells that line the body’s membranes and tissues, already on alert for foreign invaders, rather than the central-memory cells that sit deep inside the body, on call but not on patrol.

The other really important difference with the CMV vaccine is that previous vector viruses are eliminated from the body, just as we do with a cold. But CMV, whether as virus or vector, keeps on replicating in the body – and that means the immune response it generates, to itself and HIV, also does not decay.

The recent report in Nature journal[ref] about the CMV-based vaccine was picked up by the mainstream press and, as with many recent scientific advances in the HIV field, was hailed as if it was the next step to a cure.

The bad news, and the reason this is not ‘the cure’, is that for 22 (48%) of the monkeys, the vaccine did not work. (By October, 96 had been infected and the vaccine did not work in 48 of them.) They developed SIV infections with high viral loads, including four of the six monkeys infected via injection. That also means they would die within a year or two unless treated with antiretrovirals: the SIV strain chosen is highly pathogenic and typically maintains long-term blood viral loads of a million copies/ml or more. Another reason that this is not ‘the cure’ is that this is an animal study and, so far, promising signs of success in animal studies have often failed to translate into anything more.

A third reason for more cautious reporting, is that some researchers are concerned that CMV is not safe enough to use in a vaccine for humans; the very fact that it is so active and stimulates such a strong immune response worries people that, through recombination (the so-called ‘viral sex’ where these little entities swap genes), HIV could reconstruct itself from the vaccine.

The good news is this: the other half of the vaccinated monkeys also became infected with SIV. There was no doubt that SIV was there: as we said above, it showed up in cells. But it was such a pathetic, low-key infection that these monkeys never even made antibodies to the virus – meaning they would test SIV negative. The blood viral load in most of these 24 monkeys was never above five copies/ml, though five showed irregular blips up to 10,000 copies/ml in the first three months after infection but never after (with one crucial exception, which we’ll hear more about below).

Although strong immune responses to the other proteins were already present at the date of infection – an immune response to vif did not reach similar levels till two weeks after infection.

The exciting thing about this vaccine, however, is that even this low-level infection disappeared over time. When aidsmap.com first reported on this study two years ago, any trace of viral infection had disappeared in 72% of the monkeys infected rectally a year after infection. Now, three years after infection in the rectally infected monkeys and after at least a year in the monkeys infected vaginally and via injection, blood tests and cell samples could find no trace of virus in any of the monkeys that had an undetectable blood viral load. Furthermore, while levels of immune response to the vaccine remained strong, levels of immunity to SIV itself had dwindled to nothing by a year after infection, because by that time there was so little virus around the immune system couldn’t sense it.

More stringent tests were done on some monkeys. Even more ultrasensitive assays on six autopsied monkeys found no trace of virus. Three had their CD8 cells depleted by immunosuppressant drugs: no virus reappeared. And finally, in an experiment you could never do in humans, immune cells were transplanted from seven vaccinated monkeys, two monkeys on ART, and the one ‘elite controller’ monkey, into ten uninfected monkeys. None of the seven monkeys receiving cells from vaccinated monkeys developed SIV infection; the other three all did.

So this looks like a vaccine that also works like a cure. But why did it only work in half the monkeys? How can we make it work for the other half?

This clearly will be the next crucial research question to answer. One clue we have are the two ‘breakthrough’ infections. One of the vaccinated monkeys which had been infected rectally, and one vaginally, started developing a detectable SIV viral load several months after infection. In the vaginally infected monkey it was quite low, typically in the thousand copies/ml range, and was accompanied by a sudden upsurge in her CD8-cell responses to SIV. Essentially she had turned from a monkey whose vaccine was controlling her infection into one whose own body was (imperfectly) controlling it – she’d turned into an elite controller. In the rectally infected monkey the virus broke through to full infection.

Investigation showed that the breakthrough virus was the same virus the two monkeys were infected with so this was not due to viral resistance.

“Essentially, it’s chance”, Louis Picker told aidsmap.com. “SIV – and HIV – hide in many different places in the body and the patrolling CD8 cells may occasionally miss a place where it is replicating.”

Some researchers I spoke to are concerned that a CMV-based vaccine might be risky. “CMV is a live, ongoing infection,” said one. “The immune response is strong because it behaves as an actively replicating virus, and whole CMV does cause illness – including AIDS-related conditions – in people with very compromised immune systems.”

Louis Picker is more hopeful. He thinks there is something special about CMV – possibly the fact that, evolutionarily speaking, monkeys and humans have lived with it for a long time. It therefore excites a ‘Goldilocks’ immune response, one that is neither too cold and has no effect, nor too hot and creates illness in itself (most of the symptom of viruses like flu are due to the body’s violent immune response to the flu bug rather than caused by the virus itself). This means that quite a low dose of the vaccine is protective. There are many other candidate HIV vaccines under study, including other based on members of the same family as CMV. A quick search shows that there are at least eight separate phase 1 (safety and immune-response measuring) vaccine trials going on in England alone at present, and many more worldwide – and those are the ones in humans. One of these may produce sufficiently positive results to be taken forward into a large vaccine efficacy trial sooner than the five years it might take for Picker’s vaccine to be developed into a human-adapted vaccine and then given a phase 1 trial – indeed, we hope one does.

There might be other surprises as well as toxicity. Many laboratory animals are interbred and genetically similar. What if the 48% of non-responders were the ones who were genetically different? This would not bode well for a vaccine that would work in the genetically diverse human race.

But this vaccine trial is different from previous trials in some ways. It’s not just that it could be a cure as well as a vaccine (though its effect might have to last a very long time to wipe out a chronic infection in a human), it’s also that it actually did something – eliminated an infection – instead of just generating measurable immune responses.

One of the banes of HIV vaccine development has been the surrogate-marker problem: although our knowledge is improving, we still don’t have a set of immune responses we can measure in the body that will unequivocally indicate that a vaccine has a strong chance of working and should be taken forward, and this is only exacerbated in studying different species.

But this vaccine did work, albeit in only half the monkeys: and in a way that gives hope not just to people vulnerable to HIV, but those already living with it.