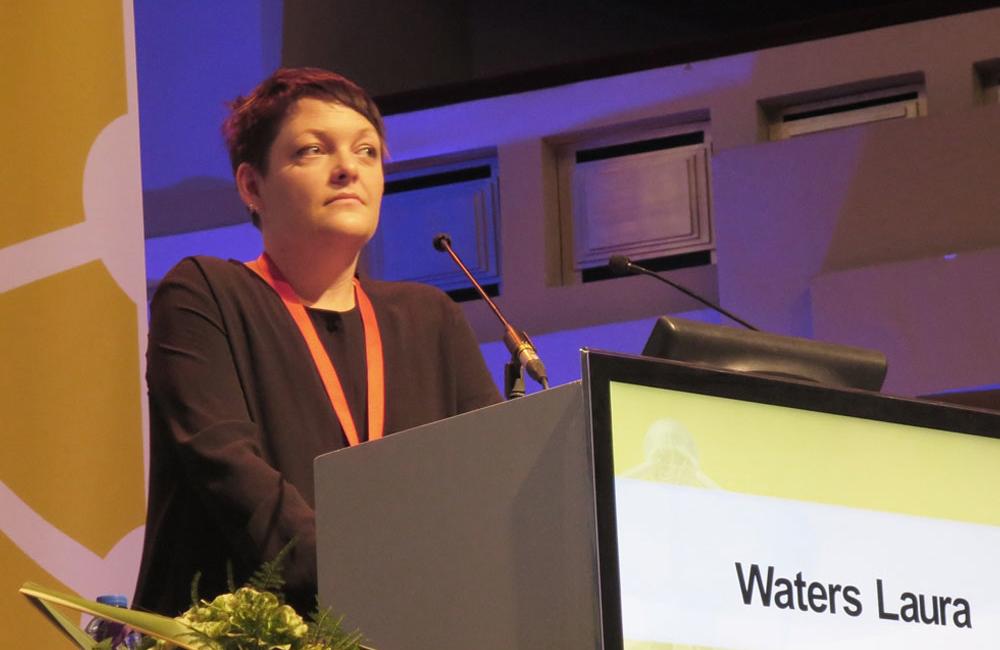 Laura Waters of Mortimer Market Centre speaking at EACS 2013. Photo by Liz Highleyman, hivandhepatitis.com
This article is more than 8 years old. Click here for more recent articles on this topic

Higher baseline viral load, longer time to viral suppression and low-level viraemia below the level of detection of standard tests raise the risk of viral rebound amongst people with HIV on antiretroviral therapy (ART), according to a pair of studies presented at the 14th European AIDS Conference this month in Brussels.

Only about 20 to 25% of people with HIV in Europe, the US and sub-Saharan African are on ART with full viral suppression, whilst the remainder fall out at various stages of the 'treatment cascade'. Lack of access and poor adherence are known problem areas, but reasons for loss of virological control amongst people who achieve viral suppression are not fully understood.

Several clinical trials have shown lower rates of viral suppression amongst people with high baseline viral load, but the impact of high pre-treatment viral load on longer-term virological outcomes in patients who achieve viral suppression is unknown, the researchers noted as background.

Eligible participants were selected from amongst 14,477 treatment-naive UK CHIC participants who started treatment with combination ART including a protease inhibitor or non-nucleoside reverse transcriptase inhibitor (NNRTI) after the year 2000. People who started ART within three months of HIV diagnosis, experienced AIDS-related events within three months after starting ART or lacked follow-up data were excluded, leaving 8184 individuals.

The participants in the main analysis were mostly men (80%), two thirds were white, one quarter were black and the median age was 38 years; 65% were men who have sex with men and 29% were heterosexual. The median baseline CD4 cell count was 245 cells/mm3. All started three-drug combination ART, with 76% starting on a NNRTI-based regimen and 24% starting on a protease inhibitor.

Most participants achieved viral suppression to <50 copies/ml either within three months (42%) or three to six months (40%) after starting first-line ART. However, 15% did so between six and twelve months after starting therapy and 5% took longer than a year to reach undetectable viral load.

In addition, viral rebound rates also rose significantly for people who took six to twelve months to achieve suppression (HR 1.47 compared to those who took three to six months) and even more so for those who took longer than a year (HR 2.49, or nearly 2.5-fold higher risk).

Patterns for both baseline viral load and time to viral suppression were similar when looking separately at people who started NNRTIs and those who started protease inhibitors. Again, people with the two highest baseline viral load levels and those who took either six to twelve months or more than a year to achieve viral suppression were at significantly greater risk for viral rebound.

Although this study was limited by lack of adherence data, Waters noted that all participants included in the main analysis managed at least good enough adherence to achieve undetectable viral load.

"[T]his study adds to the trial data that suggests we may need to investigate new strategies, with modern drugs, for individuals with high pre-treatment viral load," the investigators added. "We recommend that patients with high baseline viral load should continue to be monitored closely, even after virological suppression, as they remain at higher risk of rebound."

In a related study, Andrea Calcagno of the University of Torino in Italy and colleagues evaluated whether residual low-level virus while on ART and other clinical factors raise the risk of viral rebound over two years amongst people who have achieved 'undetectable' viral load according to standard tests.

Low-level viraemia can persist for years amongst people on suppressive ART, the researchers noted as background. Treatment intensification by adding more drugs does not eliminate low-level viraemia, but some data indicate levels may be lower in people using NNRTIs, especially nevirapine (Viramune).

This retrospective analysis included 1065 people with HIV on combination ART who had at least two consecutive HIV RNA measurements <50 copies/ml between the first half of 2010 and the second half of 2012. Most (72%) were men, the mean age was 47 years and nearly 30% were co-infected with hepatitis C.

Participants had been HIV-positive for 13 years on average and had had undetectable viral loads for three years. The mean current CD4 count was 587 cells/mm3, with a mean nadir (lowest-ever) CD4 cell count of 220 cells/mm3. Equal proportions were taking protease inhibitors and NNRTIs (about 41% for each) whilst 4% were taking raltegravir; 76% also used tenofovir (Viread, also in Truvada and single-tablet regimens).

At baseline, 78, 77 and 70% of people taking raltegravir, NNRTIs and protease inhibitors, respectively, had a measurement showing 'target not detected', with the difference reaching statistical significance; 10, 19 and 20%, respectively, had <20 copies/ml, whilst 12, 10 and 10% had 20 to 50 copies/ml.

In an adjusted multivariate analysis, the only three factors that independently predicted absence of low-level viraemia ('target not detected') were female sex (adjusted odds ratio [OR] 1.69), CD4 nadir above 200 cells/mm3 (adjusted OR 1.32) and use of either raltegravir or NNRTIs (adjusted OR 1.24 compared to protease inhibitors).

Overall, 8% of participants experienced viral rebound at two years, a proportion that remained the same when looking at the 867 people who did not change their ART regimen. Rebound occurred in 7% of people without low-level viraemia, 11% with <20 copies/ml and 16% with 20 to 50 copies/ml. The duration of viral suppression was about 30 months for people who experienced rebound compared to 50 months for sustained responders.

However, they noted, the use of a lower cut-off for defining complete viral suppression is called into question by the few available interventions in case of low-level viraemia, possibly including adherence counselling or switching to a NNRTI-based regimen.

During the national shortage of blood bottles BHIVA supports the cessation of non-essential monitoring for people with HIV, and avoidance of non-essential medication change that would require additional monitoring, where it is deemed clinically safe and appropriate to do so.
BHIVA
26 Aug 21
Undetectable viral load & treatment as prevention

Researchers with the UK-CHIC observational cohort analysed patterns of viral rebound in 1574 gay men starting ART during 2015 and 2016 with CD4 counts >350 cells/mm3 and more than one viral load <50 copies/mL.
i-Base
25 Jan 21
Viral load

Undetectable to viral rebound: When and why?