HCV reinfection is common among HIV-positive gay men in Europe 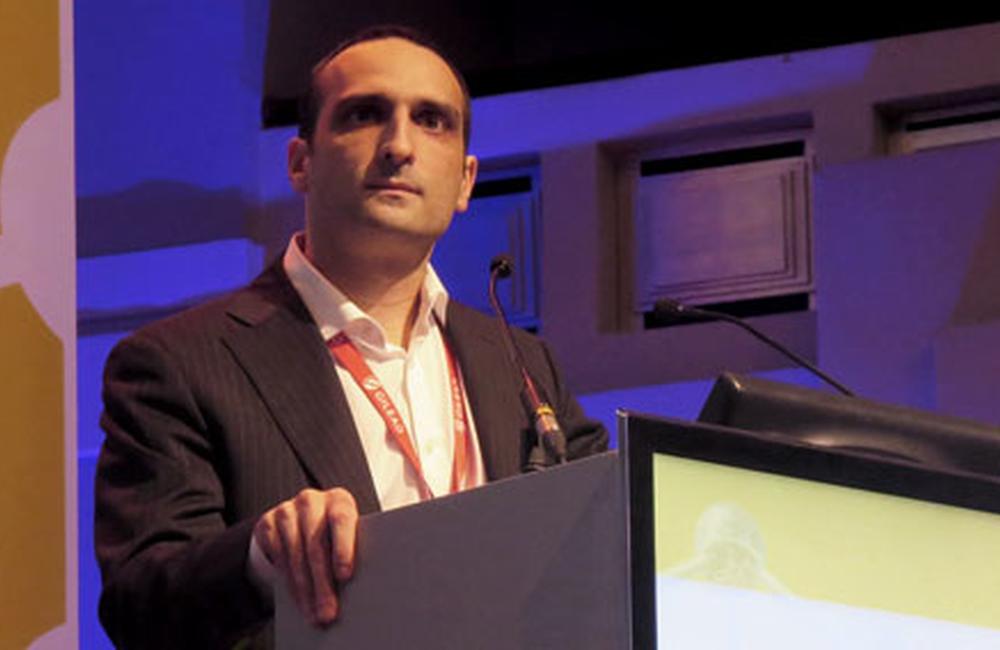 Patrick Ingiliz from the Medical Centre for Infectious Diseases, speaking at EACS 2013. Photo by Liz Highleyman, hivandhepatitis.com
This article is more than 8 years old. Click here for more recent articles on this topic

Eighteen per cent of HIV-positive men acquired hepatitis C virus (HCV) a second time after clearing the virus, with some having third and fourth infections as well, according to findings from the European AIDS Treatment Network (NEAT) presented at the 14th European AIDS Conference this month in Brussels.

Up to one quarter of people with acute HCV infection clear the virus without treatment, whilst the remainder develop chronic hepatitis C lasting more than six months; spontaneous clearance is less common (around 15 to 20%) amongst people with HIV. Treatment with interferon-based therapy is highly effective during acute infection. However, people who clear HCV naturally or with treatment remain susceptible to reinfection.

Patrick Ingiliz from the Medical Centre for Infectious Diseases and fellow investigators with the NEAT Study Group looked at rates of HCV reinfection amongst HIV-positive people in the UK, Austria and Germany.

The analysis included 646 men with HIV seen at six NEAT centres since 2002 who had had acute hepatitis C with either spontaneous clearance (12%) or treatment-induced cure (88%). Men with a second or subsequent HCV infection were included in the analysis.

Reinfection was defined as detectable HCV RNA after confirmed spontaneous clearance (negative HCV RNA at 24 weeks after diagnosis) or more than 24 weeks after sustained virological response (SVR) to treatment, or infection with a different genotype or clade than the initial infection.

Overall, 113 men (18%) were identified as having at least a second episode of HCV infection, which occurred a median of 162 weeks after the first. Almost all were gay or bisexual men with a median age of 38 years and nearly half had the favourable IL28B 'CC' gene variant. They had well-controlled HIV disease, with 67% being on antiretroviral therapy (ART), half having undetectable viral load, and a median CD4 cell count of 538 cells/mm3. The most common HCV genotype was 1 (71%), followed by 4 (17%) and 3 (11%); 45% showed a switch of HCV genotypes between their first and second infections.

Nineteen participants had a third episode of HCV infection, occurring a median of 122 weeks after the second diagnosis. Here, 81% were genotype 1 infections, 13% were genotype 4 and 6% were genotype 3; half had a switch from their previous genotype.

There were three people who went on to become infected a fourth time, occurring a median of 52 weeks after the third diagnosis. Two had genotype 1 and one had genotype 4, with two out of three showing a switch in genotypes.

Most people who did not spontaneously clear HCV underwent treatment with pegylated interferon plus ribavirin; two also received telaprevir (Incivo or Incivek) and one also received simeprevir (an experimental HCV protease inhibitor).

The SVR rate for treatment of the second infection was 45%; 19% were non-responders (about 15% were still being treated or in post-treatment follow-up). Cure rates appeared lower during the third and fourth episodes, but numbers were small and some of participants were still awaiting SVR data.

CD4 count and use of ART did not predict spontaneous clearance of the second infection. Clearers were more likely to have the favourable IL28B gene variant (71 vs 44%) and had lower HCV RNA and higher alanine aminotransferase (ALT), but none of these differences reached statistical significance. The only significant predictor was clearance of the first infection, which occurred in 32% of second infection clearers and 9% of non-clearers.

Looking at the third episode, spontaneous clearers and non-clearers were equally likely to have the IL28B 'CC' variant (50% each) and HCV RNA was higher amongst clearers, though not significantly so. Previous clearers were again more likely to clear their subsequent infection (33% of third infection clearers vs 10% of non-clearers), but this time the difference did not reach statistical significance.

"We observed reinfections with the same or with a distinct HCV genotype, and did not find any evidence of immune protection when reinfected with the same genotype," they added.

"Understanding of risk behaviours and promoting strategies for risk-avoidance will be important to prevent reinfections in this population," they recommended.