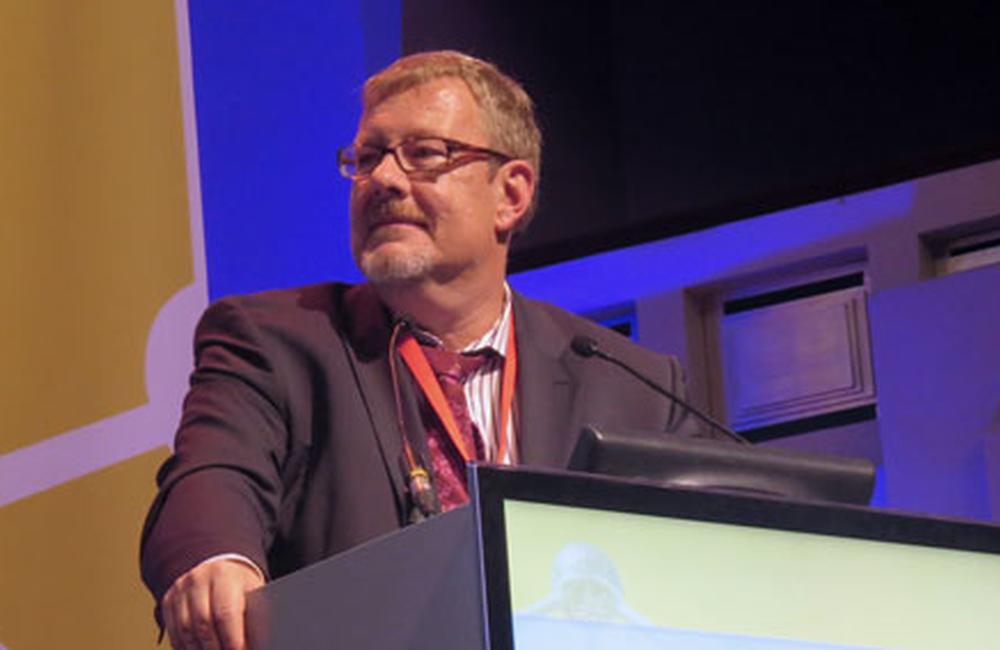 Jürgen Rockstroh, from the University of Bonn, speaking at EACS 2013. Photo by Liz Highleyman, hivandhepatitis.com
This article is more than 8 years old. Click here for more recent articles on this topic

The HCV protease inhibitor faldaprevir added to pegylated interferon and ribavirin increased the likelihood that HIV/HCV co-infected people would achieve a sustained virological response at four weeks after completing treatment, according to a report at the 14th European AIDS Conference last week in Brussels.

The advent of direct-acting antivirals has brought revolutionary change to the hepatitis C treatment field. Although these new drugs will ultimately be used in all-oral regimens, those approved first will initially be used as add-ons to pegylated interferon/ribavirin.

Jürgen Rockstroh from the University of Bonn presented interim findings from the STARTVerso 4 study evaluating faldaprevir plus pegylated interferon and ribavirin in HIV-positive people with hepatitis C co-infection. HIV/HCV co-infected people experience more rapid liver disease progression and do not respond as well to interferon as those with hepatitis C alone.

Faldaprevir (formerly BI 201335), an HCV NS3/4 protease inhibitor, is active against HCV genotypes 1, 4, 5 and 6. It has previously demonstrated good efficacy and tolerability in HIV-negative people with hepatitis C alone, both in combination with pegylated interferon/ribavirin and in all-oral, interferon-free regimens.

This open-label phase 3 study enrolled 308 HIV/HCV co-infected people who were either never before treated for hepatitis C (78%) or were relapsers after a prior attempt at interferon-based therapy (22%). Rockstroh noted that this is the largest number of patients studied so far in a co-infection trial.

Most participants (81%) were men, 83% were white, 14% were black and the average age was 47 years. They were enrolled in Europe (73%), North America (22%) and Brazil (5%). About half had the favourable IL28B 'CC' variant associated with interferon responsiveness, 79% had harder-to-treat HCV subtype 1a and 15% had liver cirrhosis.

Participants were required to be either on stable antiretroviral therapy (ART) or HIV treatment-naive with a CD4 cell count of at least 500 cells/mm3. At baseline, the mean CD4 count was 537 cells/mm3 and only eleven people were not on ART. About half of treated patients (46%) were taking raltegravir (Isentress), 27% were taking efavirenz (Sustiva) and 22% were taking either boosted atazanavir (Reyataz) or darunavir (Prezista).

Participants were treated with once-daily faldaprevir in combination with pegylated interferon alfa-2a (Pegasys) plus weight-based ribavirin. Previous studies showed that faldaprevir – a moderate CYP3A4 inhibitor – can interact with certain antiretrovirals, so doses were adjusted accordingly. Those taking boosted atazanavir or darunavir (which raises faldaprevir by 130%) used 120mg faldaprevir, whilst those taking efavirenz (which lowers faldaprevir levels by 35%) used 240mg. Participant who were either ART naive or taking raltegravir were randomly assigned to receive either 120mg or 240mg.

Everyone assigned to 120mg faldaprevir stayed on triple therapy for 24 weeks. Those taking 240mg were randomly assigned to take faldaprevir for 12 or 24 weeks. Duration of the pegylated/interferon 'tail' was determined using response-guided therapy. People with 'early treatment success' (HCV RNA <25 IU/ml at week 4 and undetectable at week 8) stopped all drugs at 24 weeks, whilst those without continued pegylated interferon/ribavirin through week 48.

Rockstroh reported rates of sustained virological response (SVR, or continued undetectable HCV viral load) at four weeks after completion of therapy (SVR4). Relapse can still occur after this point so people with SVR4 are not yet considered cured. Regulatory agencies now consider SVR at 12 weeks post-treatment (SVR12) to indicate a cure.

The SVR4 rate for people with HCV subtype 1a was 74% compared with 77% for those with 1b, indicating that viral subtype is not a key determinant of response as it is for some other direct-acting antivirals. People with and without cirrhosis also had similar SVR4 rates, 76% and 74%, respectively.

Prior treatment status did have an effect, however: 71% of previously untreated patients achieved SVR4 compared with 87% of relapsers. IL28B also played a role, as those with the favourable 'CC' genotype had an SVR4 rate of 89% compared with 67% for those with either the 'CT' or 'TT' variants.

Amongst the randomised participants, a majority – 77% taking 120mg faldaprevir for 24 weeks and 81% taking 240mg – had 'early treatment success', and, for these individuals, SVR4 rates were 89 and 87%, respectively.

Faldaprevir triple therapy was generally safe and well tolerated. Almost all participants experienced some side-effects, as is typical with interferon. One in ten experienced serious adverse events and 44% had grade 3 or higher laboratory abnormalities (including 16% with neutropenia and 19% with elevated bilirubin), but only two people (1%) stopped faldaprevir for this reason. One person taking 120mg faldaprevir experienced HIV viral rebound.

"Faldaprevir was highly efficacious and well tolerated in difficult-to-treat patients co-infected with HIV and HCV genotype 1," the researchers concluded. "Response rates were comparable across faldaprevir doses and durations and among patients who received either 24 or 48 weeks of pegylated interferon/ribavirin."

A limitation of this study is that it excluded prior null responders, the most difficult group to treat. Rockstroh noted that this was one of the first co-infection trials started after the poorly tolerated first-generation HCV protease inhibitors, and as null responders with cirrhosis were expected to respond less well, "no one wanted to take the risk."