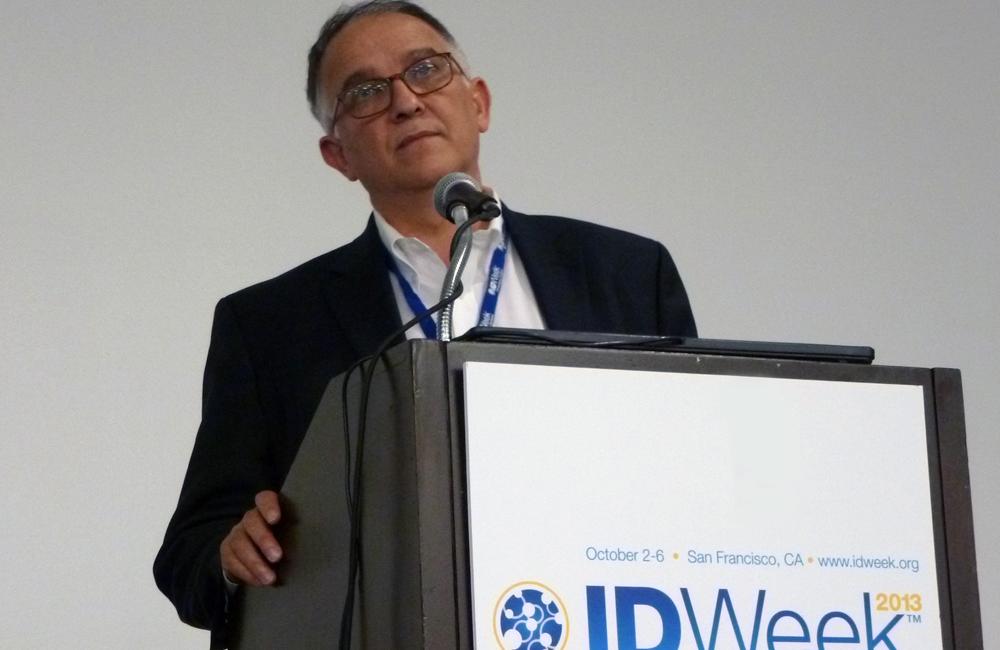 Pablo Tebas, University of Pennsyvania, reports results of the SPIRIT study at ID Week 2013. Photo by Liz Highleyman, hivandhepatitis.com
This article is more than 9 years old. Click here for more recent articles on this topic

The single-tablet regimen Eviplera (rilpivirine/tenofovir/FTC) worked as well as Atripla (efavirenz/tenofovir/FTC) for treatment-naive people across a range of viral load and CD4 cell counts, researchers reported at the Second IDWeek conference last week in San Francisco. Another study found that switching from a boosted protease inhibitor to Eviplera lowered cholesterol and triglyceride levels

Calvin Cohen from the Community Research Initiative of New England reported findings from the open-label STaR trial, the first head-to-head comparison of Eviplera vs Atripla in people starting antiretroviral therapy (ART) for the first time.

Unlike the earlier ECHO and THRIVE trials, which compared the same drug combinations taken as separate pills plus placebos – requiring multiple daily pills with different food requirements – all participants in STaR took a single tablet once-daily.

Overall, both single-tablet regimens produced good virological suppression: 86% of participants in the Eviplera arm and 82% in the Atripla arm achieved undetectable viral load (<50 copies/ml) at 48 weeks in a snapshot analysis. Virological failure occurred in 8 and 6%, respectively, and CD4 gains were similar (200 vs 191 cells/mm3).

A similar pattern emerged for CD4 counts. Amongst people with a CD4 count greater than 200 cells/mm3, response rates were 88% for Eviplera and 83% for Atripla. Response rates were lower overall for people who started treatment with a CD4 count of 200 cells/mm3 or less but similar for the two regimens, 72 and 71%, respectively. These differences were not statistically significant.

Looking at these factors together, in an analysis that excluded study participants with missing data, virological response rates were statistically similar for people taking Eviplera and Atripla with all combinations of baseline viral load, CD4 count and adherence levels. Amongst people with the least favourable combination – high viral load, low CD4 count and sub-optimal adherence – only 50% achieved viral suppression with either single-tablet regimen.

Turning to virological failure, rilpivirine appeared to fare a bit more poorly, especially for people with low CD4 counts. In the lower viral load/lower CD4, strata, two out of ten people (20%) with excellent adherence and three out of nine (33%) with lower adherence experienced virological failure on Eviplera, compared with none (0%) on Atripla. However, patterns were not consistent and the number of people experiencing treatment failure was small and affected by missing data, so differences were not significant.

People with at least 95% adherence reported better tolerability of both regimens. In particular, highly adherent people taking Atripla reported fewer efavirenz-associated central nervous system (CNS) side-effects such as abnormal dreams or depression, but this study could not determine the direction of cause and effect. Although rilpivirine has been associated with fewer CNS adverse events than efavirenz in clinical trials, this sub-group analysis showed that in people with CD4 counts above 200 and with greater than 95% adherence, the difference in tolerability was much less pronounced.

Cohen noted that this analysis was intended in part to see if rilpivirine is more vulnerable than efavirenz to resistance and treatment failure if people miss doses. The findings indicated that although "both drugs suffered from missed doses," rilpivirine did not appear to do worse.

Pablo Tebas from the University of Pennsylvania reported findings from the phase 3 SPIRIT study, which looked at outcomes for people with suppressed viral load who simplified treatment by switching from a ritonavir-boosted protease inhibitor plus two nucleoside/nucleotide reverse transcriptase inhibitors (NRTIs) to Eviplera.

The study included 476 participants. About 90% were men, three-quarters were white, about 16% were black, the median age was just over 40 years and they had been on ART for nearly three years. The mean CD4 count was high, approaching 600 cells/mm3. At baseline about one-third each were taking boosted atazanavir (Reyataz) and lopinavir/ritonavir (Kaletra) whilst 20% were on boosted darunavir (Prezista). For NRTIs, 81% used tenofovir/FTC (the drugs in Truvada) and 13% used abacavir/3TC (the drugs in Kivexa or Epzicom). Participants were randomly assigned to switch to Eviplera either immediately or after six months.

Eviplera was shown to be non-inferior overall: 94% of participants who switched right away, 92% in the delayed switch arm and 90% who stayed on their protease inhibitor regimen maintained virological suppression (<50 copies/ml) at 24 weeks. At 48 weeks, 89% in the immediate switch arm still had undetectable viral load.

Tebas' report focused on changes in blood lipids, which are known to affect cardiovascular risk.

Total cholesterol levels fell by -25 mg/dl following either an immediate or delayed switch to Eviplera, whilst LDL 'bad' cholesterol fell by about -16 mg/dl. HDL 'good' cholesterol fell by only a small amount (-2 to -4 mg/dl). People who stayed on a protease inhibitor essentially saw no change in any of these parameters. Triglyceride levels in the immediate switch arm fell by -54 mg/dl at 24 weeks and by -65 mg/dl at 48 weeks; the delayed switch arm saw a -81 mg/dl drop. In contrast, triglycerides rose slightly whilst participants remained on protease inhibitors (+3 mg/dl).

These changes resulted in overall improvement in lipid profiles after switching to Eviplera. The researchers used the US National Cholesterol Education Program (NCEP) system, which classifies people as having desirable/optimal, borderline or high lipid levels based on their risk of developing cardiovascular disease.

At baseline, 59% of participants were classified as having desirable total cholesterol levels. At 24 weeks, this rose to 84% in the immediate switch group whilst remaining about the same for people who remained on protease inhibitors. The before-and-after percentages were the same for triglycerides.

The proportion of people with optimal LDL rose after the switch (from 29 to 45%) whilst the percentage with high HDL fell a bit (from 27 to 17%). This resulted in an increased proportion of switchers achieving a favourable total cholesterol-to-HDL ratio (from 41 to 55%), compared with no change (38 to 37%) amongst those continuing on protease inhibitors.

"Simplifying from a [protease inhibitor/ritonavir] regimen to [Eviplera] in HIV-1 RNA suppressed patients may be an effective therapeutic choice for maintaining virologic suppression...[and] improving lipid profiles," the researchers concluded.