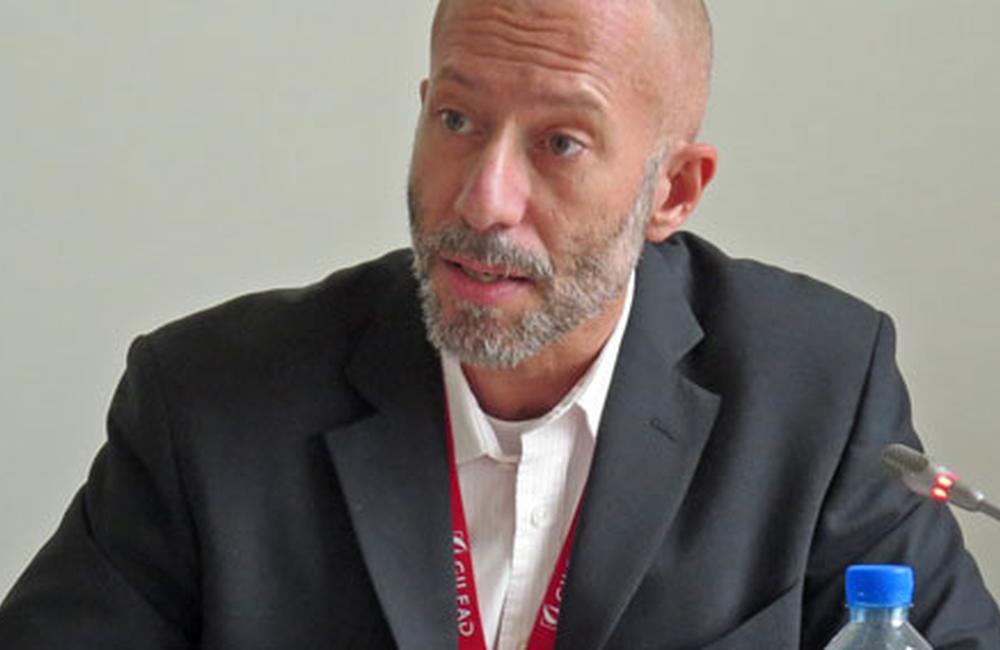 Tamás Berezcky of the European AIDS Treatment Group. Photo by Liz Highleyman, hivandhepatitis.com
This article is more than 8 years old. Click here for more recent articles on this topic

In a statement issued on the opening day of the 14th European AIDS Conference in Brussels, the European AIDS Clinical Society called on the Russian Federation to abolish recent legislation which imposes substantial fines on Russian nationals accused of engaging in “propaganda of non-traditional sexual relations amongst minors”. Foreign citizens face up to 14 days in prison and deportation for the same offence.

The bill also outlaws the “obtrusive spreading of information about non-traditional sexual relationships that may arouse interest in such relationships”.

Russian activists and non-governmental organisations have protested that the law could be used against any sort of HIV prevention activities targeting men who have sex with men.

“We are concerned that these provisions not only affect basic human rights, but also result in harmful public health policy since they add to the already-existing barriers related to HIV prevention, diagnosis, access and retention in care”, EACS stated. “The legal framework in States should do everything to reduce stigmatisation.”

Russian politicians have been extremely resistant to lobbying from foreign politicians on questions of human rights, not least on recent legislation and rhetoric which seeks to stigmatise and marginalise alternative sexualities. In a recent interview, President Putin insisted that no discrimination against gay people existed in Russia.

But Georgia’s President Mikheil Saakashvili expressed concern last month over the way in which Russian politicians are using anti-gay rhetoric to promote anti-Western and anti-democratic values throughout the countries of the former Soviet Union.

A similar law has recently been passed in Moldova and was narrowly rejected by Armenia’s parliament last month.

In view of this hostility to Western influences, some have questioned whether lobbying by foreign non-governmental organisations will have any impact.

“As scientists we have a moral obligation to say what is unethical and unacceptable”, said Professor Nathan Clumeck, Co-Chair of the 14th European AIDS Conference. “To be silent is to be complicit.”

“Another reason [to make a statement] is to encourage physicians”, said Professor Manuel Battegay, EACS President.

“People with HIV can make an impact if they see that they get support from physicians. Look at what happened in Ukraine over the past 18 months, where patients fought for access to treatment and diagnostic tests”, said Tamás Berezcky, a Hungarian member of the European AIDS Treatment Group.

“Instead of trying to keep people alive using scientific evidence, the Russian government is using church morality. These laws keep people silent, and silence is still death”, he went on.

The legislation followed nearly a decade of increasing political and social hostility towards gay, lesbian and transgender people in the Russian Federation, including the banning of gay rights parades in Moscow and other Russian cities. In 2011, the European Court of Human Rights fined the Russian government for violating Articles 11, 13 and 14 of the European Convention on Human Rights, as a result of 164 bans on gay pride marches and events between 2006 and 2008.

Prime Minister David Cameron of the United Kingdom has attempted to raise the issue of anti-gay legislation with President Putin, but, “Russia is not ready to take lessons from anyone. The European Union needs to work with other countries at the level of diplomacy. The EU has to remain strong on its values and its ethical stance against homophobia, xenophobia, against discrimination,” said Professor Michel Kazatchkine, the UN Secretary-General’s Special Envoy on HIV/AIDS in Eastern Europe and Central Asia.

In a unanimous decision, the Botswana Court of Appeals upheld the 2019 ruling that decriminalized gay sex in the southern African country, which had been appealed almost immediately by the government. The Court’s decision cannot be further appealed.
Erasing 76 Crimes
30 Nov 21
Global health initiatives

Dear friends, Greetings on this World AIDS Day, and my solidarity with all around the world as we confront the impact of colliding pandemics. This year, the world agreed on a bold plan that, if leaders fulfil it, will end AIDS by 2030. That’s so exciting. But today we, as the Joint United Nations Programme on HIV/AIDS, issue a stark warning. AIDS remains a pandemic, the red light is flashing and only by moving fast to end the inequalities that drive the pandemic can we overcome it.
UNAIDS
29 Nov 21
Discrimination & the law

Australia introduces law that would allow some organisations to ‘discriminate’ based on faith. LGBT+ activists fear the bill could end up overriding existing protections for vulnerable groups
The Independent
25 Nov 21
Human rights

Trial over killing of HIV activist begins in Greece

Three years after a prominent Greek-American HIV activist was beaten to death in Athens, six people will appear in court on Wednesday in what Greece's LGBTQ community sees as an important trial for gay rights in the country.
FRANCE 24
20 Oct 21
Men who have sex with men (MSM)

From injections to electric shocks, prayer to rape, myriad methods are peddled by medics, counsellors and moralists to try and change or suppress the sexual desire or gender identity of LGBT+ people. Interviews with practitioners and people who have been through conversion therapy reveal a deep divergence over practices that dozens of medical associations have condemned as ineffective and harmful.
Thomson Reuters Foundation
20 Sep 21
More editors' picks