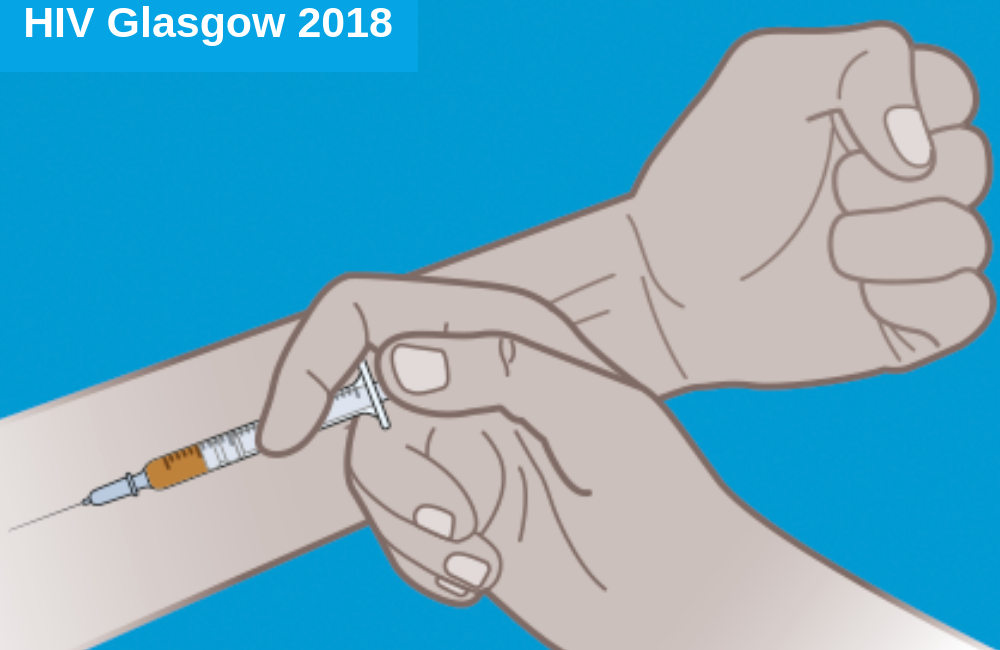 Intensive efforts to reach people who inject drugs who have acquired HIV in a recent transmission outbreak in the city have resulted in high levels of antiretroviral treatment and viral suppression in a predominantly homeless population, clinicians and nurse specialists from Glasgow’s Brownlee Centre for Infectious Diseases reported in a poster discussion session dedicated to the city’s response to the outbreak at the International Congress on Drug Therapy in HIV Infection (HIV Glasgow 2018) last week.

An HIV outbreak among people who inject drugs in Glasgow was detected in 2015. Virus sequencing by a team at the University of Edinburgh has established that 119 people diagnosed with HIV in Scotland were infected with a subtype C strain of HIV that had two mutations conferring resistance to non-nucleoside reverse transcriptase inhibitors. This viral strain was first detected in a person diagnosed with HIV in 2005. Transmission began to accelerate in 2014 and in 2016; around 100 very closely related viruses were identified in recently diagnosed drug users, indicating very rapid transmission.

Professor Andrew Leigh-Brown of the University of Edinburgh said that the outbreak was one of the largest of recent years among people who inject drugs. The Glasgow outbreak was on a similar scale to those in the US state of Indiana and in Athens, but unlike those outbreaks, it occurred in the face of intensive harm reduction activity in the city.

After the outbreak was detected, engaging people in care and encouraging them to start antiretroviral therapy (ART) was a priority. Healthcare workers in Glasgow faced several challenges: many of the drug users diagnosed with HIV were homeless and spent their time in the east end of Glasgow, far from the city’s main HIV clinic at Gartnavel Hospital on the western outskirts of the city. A new model of care was needed, Erica Peters of the Brownlee Centre told the symposium.

Instead of offering hospital-based appointments and antiretroviral dispensing, consultants and clinical nurse specialists went out to provide clinical services at homeless healthcare facilities in the city. Nurses have also gone to areas known as public injecting sites, as well as homeless shelters and areas known for rough sleeping, to follow up patients. As a result, two-thirds of people who inject drugs diagnosed with HIV have attended a consultant-led bloodborne viruses clinic in a health facility for the homeless.

As well as being critical for individual health, rapid ART initiation also has the potential to reduce HIV transmission. In September 2015 guidance on treatment initiation changed, to recommend treatment regardless of CD4 cell count. A comparison of the speed of ART initiation between men who have sex with men (MSM) and people who inject drugs diagnosed with HIV in Glasgow with CD4 counts over 350 cells/mm3 at diagnosis showed that it took five times as long for drug users to start treatment compared to MSM after September 2015.

After September 2015 the interval between diagnosis and treatment initiation in MSM fell to 22 days, an 86% reduction. In people who inject drugs the median interval fell from 385 days to 111 days, a 71% reduction.

The outreach clinic has also provided direct-acting antiviral treatment for people with hepatitis C co-infection through community pharmacies, in the same way as for antiretroviral drugs. Seventy-six people were diagnosed with chronic hepatitis C virus (HCV) infection. Of these, 26 have already begun treatment and 50 await treatment. Of the 18 people who have completed treatment, 17 had an undetectable HCV RNA at the end of treatment and in one case, treated failed. One person has subsequently been reinfected with HCV.

Metcalfe R et al. From Hospital to the Community: Redesigning the Human Immunodeficiency Virus (HIV) Clinical Service Model to Respond to an Outbreak of HIV Among People Who Inject Drugs. The Journal of Infectious Diseases, 222: S410-S419, October 2020.