Do people living with HIV who have an undetectable viral load need to wear condoms? 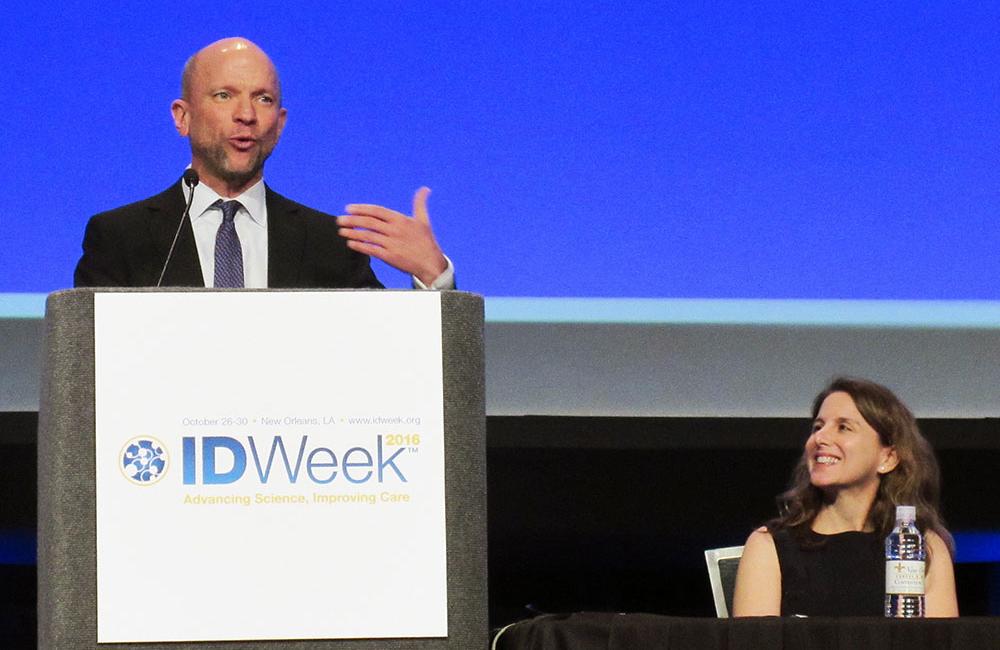 In the face of extensive research showing that people living with HIV who are on antiretroviral therapy (ART) with stable undetectable viral load have an extremely low likelihood of transmitting the virus, a majority of participants at IDWeek 2016 in New Orleans thought they should still be advised to use condoms – a proportion that actually increased after a debate that laid out the evidence.

Lisa Winston of the University of California at San Francisco argued the 'Pro' side, while Roy Gulick from Weill Medical College of Cornell University took the 'Con' position.

Sexually transmitted diseases other than HIV were Dr Winston's major concern. She called attention to the Center for Disease Control and Prevention's recent annual sexually transmitted disease (STD) surveillance report, which showed that cases of chlamydia, gonorrhoea and syphilis in the US had reached their highest level ever. She also cited an analysis from the Kaiser Permanente San Francisco pre-exposure prophylaxis (PrEP) programme, which found that after six months on PrEP 30% of participants were diagnosed with at least one STI, rising to 50% after 12 months. But there were no new HIV infections.

"I think a lot of people would say that we've underestimated STDs," Dr Winston said. "There's been this feeling that – as long as you don't get HIV – while it's nice to avoid STDs, we can pretty much treat them and it's not that important. But now I think we're newly appreciating how scary some of these can be."

Recent reports have described clusters of ocular syphilis in Seattle and San Francisco, and the rate of congenital syphilis transmitted from pregnant women to their babies is increasing.

Gonorrhoea is becoming increasingly drug-resistant. Currently there is only one recommended regimen in the US combining two drugs, but public health officials in Hawaii recently identified the first cluster of gonorrhoea cases with reduced susceptibility to both these medications.

"It kind of feels old-school to be talking about condoms, but it turns out that condoms work – they work to prevent many if not most sexually transmitted infections," Dr Winston said. "Our other option is to tell people to stop having sex."

Dr Winston also argued that undetectable HIV may become detectable for a variety of reasons including missing doses of antiretrovirals and concurrent illnesses. One study looking at more than 14,500 people on ART at six HIV clinics found that viral load exceeds 1500 copies/ml 23% of the time, 79% of people had at least one detectable viral load and 17% had a viral load above 1500 after an undetectable test.

Finally, Dr Winston suggested that rare cases of HIV infection can occur even when viral load is suppressed. Studies have shown that some men can have detectable HIV in their semen even when blood plasma viral load is below the limit of detection.

"If you observe enough people for a long enough period of time, you probably will see occasional transmissions – they will be rare, but they are likely to occur," Dr Winston concluded. "What is your appetite for risk when advising patients?"

Dr Gulick took the opposing position, emphasising that several studies of HIV transmission within serodiscordant couples saw no new linked infections when the HIV-positive partner was on ART with undetectable vial load.

"Condoms certainly do the job, but you have to put them on correctly and they can fail," he said. "Let's face it – no one really wants to use a condom if they don't have to."

As far back as the year 2000, researchers reported that in a cohort of more than 400 serodiscordant heterosexual couples in Rakai, Uganda, no cases of HIV transmission occurred when viral load was below 1500 copies/ml.

In January 2008 the Swiss AIDS Commission released the so-called Swiss Statement, declaring that, an HIV-infected person on potent ART "is not sexually infectious" as long as they maintain an undetectable viral load and do not have concurrent STDs.

HPTN 052, a large randomised study of antiretroviral treatment-as-prevention, looked at 1763 mostly heterosexual serodiscordant couples in Africa, Asia and the Americas. The HIV-positive partner was randomly assigned to either start ART immediately or wait until their CD4 count fell below 250 cells/mm3. Myron Cohen first reported results at the 2011 International AIDS Society conference, showing that prompt ART reduced the risk of infection by 96%.

More recently, the PARTNER study looked at more than 1100 serodiscordant couples in which the positive partner was virally suppressed, including 340 gay male couples. With around 58,000 total sex acts reported, the study saw no documented cases of within-couple transmission.

Dr Winston countered that presumed monogamous partners are not, in fact, always monogamous. Indeed, HPTN 052 saw 26 unlinked infections and the PARTNER study saw 11 such infections where HIV-negative partners acquired HIV from someone other than their stable partner.

"Monogamy is tricky," she said. "Sometimes even when the stakes are high, people have been known to have sex with someone who is not their spouse or stable partner."

He added that while STD incidence rates in Truvada PrEP trials are often high, the number of HIV infections among people who use it consistently has been extremely low or nil. STDs are by-and-large still treatable. Furthermore, people taking PrEP may be tested for STDs more frequently and treated more promptly, so we can anticipate that STDs may actually go down over time.

"Lisa tried to scare us, as people have been doing for many years," Dr Gulick said. "We should not spend time worrying about things that don't happen very often at all. I've presented data on more than 15,000 serodiscordant couples, all suppressed on ART. How many transmitted HIV to their seronegative partner? Zero."

Despite the plethora of evidence offered by Dr Gulick, the IDWeek audience remained cautious. Repeating the same poll after the debate, the proportion who would recommend that HIV-positive men with undetectable viral load should always wear a condom rose to 69.6%.

Of note, the question in the IDWeek programme was worded as "Do HIV viral load undetectable males need to wear a condom?" while the question projected on the screen at the session was "Should HIV-positive males with an undetectable viral load be advised to wear a condom to prevent transmission of HIV disease?" These questions may have different answers, as the most compelling reason for using condoms may be to prevent diseases other than HIV.

It's also worth noting that healthcare providers may be more risk-averse about health-related behaviour than the population at large – especially when it comes to sex, and even more so gay sex.

In another presentation at the HIV Research For Prevention (HIVR4P) conference, researchers reported findings from a survey of medical students showing that they would be less willing to prescribe PrEP to gay men who were non-monogamous and did not use or planned to stop using condoms – precisely the group most in need of an effective prevention method – showing that in some cases ideology may win out over evidence.