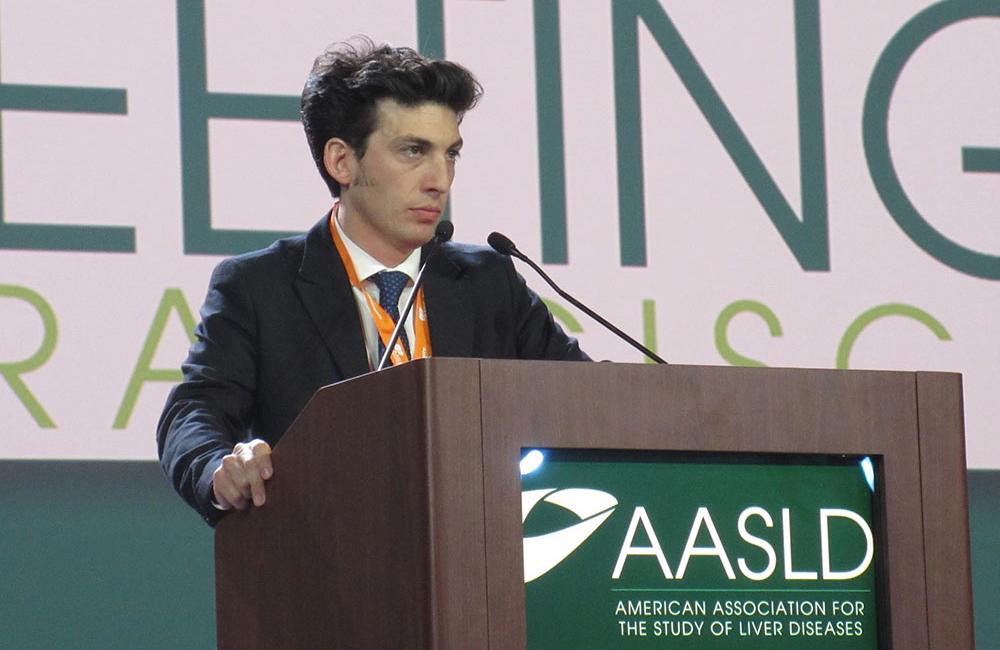 A co-formulation of sofosbuvir and the pan-genotypic HCV NS5A inhibitor velpatasvir from Gilead Sciences produced sustained response in 99% of people with hepatitis C virus genotypes 1, 2, 4, 5 and 6, and 95% of those with harder-to-treat genotype 3, according to results from the phase 3 ASTRAL trials presented this week at the 2015 AASLD Liver Meeting in San Francisco.

A related late-breaking poster showed that sofosbuvir/velpatasvir with or without ribavirin cured most people with decompensated liver disease.

Interferon-free direct-acting antiviral (DAA) therapy has revolutionised treatment for chronic hepatitis C, but researchers continue to try to optimise therapy. An ideal regimen would be of short duration, not require ribavirin, and would be pan-genotypic, meaning it could be routinely prescribed without the need for genotype testing. HCV genotype 1 is most common in Europe and the US, but genotypes that are more prevalent elsewhere in the world – including 4, 5 and 6 – have not been as well studied.

Jordan Feld of Toronto Western Hospital Liver Centre presented results from the ASTRAL-1 trial (NCT02201940), which evaluated sofosbuvir/velpatasvir for patients with all genotypes except 3, which has proven harder to treat with DAAs. Results were published simultaneously in the November 16 online edition of the New England Journal of Medicine. Findings from ASTRAL-2, which looked specifically at people with HCV genotype 2, and ASTRAL-3, which enrolled genotype 3 patients, were also presented at the Liver Meeting.

About 60% of participants were men, most were white and the median age was about 54 years. A third were treatment-experienced (prior failure of interferon/ribavirin or a first-generation HCV protease inhibitor), two-thirds had unfavourable IL28B non-CC gene patterns and 19% had compensated cirrhosis. People with HIV co-infection were not included.

Participants with genotypes 1, 2, 4 or 6 were randomly assigned (5:1) to receive either a 400mg/100mg once-daily fixed-dose co-formulation of the HCV NS5B polymerase inhibitor sofosbuvir (marketed separately as Sovaldi) and the pan-genotypic NS5A inhibitor velpatasvir (formerly GS-5816), or else a placebo, for 12 weeks. Because their number was small, all genotype 5 patients received active treatment.

The primary study endpoint was sustained virological response, or continued undetectable viral load, at 12 weeks after completion of treatment (SVR12).

SVR12 rates were the same (99%) for previously untreated and treatment-experienced patients, and for people with and without cirrhosis. Sequencing showed that 257 participants (42%) had NS5A resistance-associated variants (RAVs) at baseline, and this group also had a 99% cure rate.

Of the participants who did not achieve sustained response, two relapsed (one each in the genotype 1a and 1b groups), two people were lost to follow-up, one withdrew consent and one died from an unrelated cause.

Sofosbuvir/velpatasvir was generally safe and well-tolerated. Fifteen people (2%) taking the co-formulation experienced serious adverse events and one discontinued treatment due to an adverse event. Grade 3-4 laboratory abnormalities were uncommon (7%). While more than three-quarters of patients treated with sofosbuvir/velpatasvir reported some adverse events, this was also the case in the placebo group. The most common side-effects were headache, fatigue, nasopharyngitis and nausea, again reported with similar frequency in the active treatment and placebo arms.

Based on these findings, the researchers concluded, "[Sofosbuvir/velpatasvir] for 12 weeks provides a simple, safe and highly effective treatment for patients with HCV genotype 1, 2, 4, 5 or 6 infection."

Mark Sulkowski of Johns Hopkins presented findings from the ASTRAL-2 trial (NCT02220998), which looked at a larger number of people with HCV genotype 2. While ASTRAL-1 included just 35 genotype 2 patients, ASTRAL-2 enrolled 240 patients at 51 sites in the US. About 60% were men, about 90% were white and the median age was 57 years; 15% were treatment-experienced and 14% had cirrhosis.

Participants in this open-label study were randomly assigned (1:1) to receive sofosbuvir/velpatasvir or sofosbuvir plus ribavirin – standard therapy for this genotype – for 12 weeks. The once-daily fixed-dose combination would be more convenient than ribavirin (usually taken twice-daily) and eliminating ribavirin would reduce the risk of anaemia.

Again, treatment was generally well-tolerated. Two people in each arm experienced serious adverse events and one person taking sofosbuvir/velpatasvir discontinued due to an adverse event. While most other side-effects were similar in both arms, six people taking ribavirin – but none using the ribavirin-free regimen – developed anaemia (haemoglobin <10 g/dl).

ASTRAL-3 enrolled 552 genotype 3 patients at 76 sites in Europe, the US, Canada, Australia and New Zealand. Just over 60% were men, most were white and the median age was 50 years. About a quarter were treatment-experienced, 60% had unfavourable IL28B variants and 30% had cirrhosis.

Participants in this open-label trial were randomly assigned (1:1) to receive either sofosbuvir/velpatasvir for 12 weeks or sofosbuvir plus ribavirin for 24 weeks.

Sofosbuvir plus ribavirin is not highly effective against genotype 3, but before the approval of daclatasvir (Daklinza) it was the recommended regimen. Unlike velpatasvir, the NS5A inhibitor ledipasvir in the Harvoni coformulation has little activity against genotype 3.

Again, treatment was generally well-tolerated. Six people in the sofosbuvir/velpatasvir arm and 15 in the sofosbuvir plus ribavirin arm experienced serious adverse events, and three people – all in the ribavirin-containing arm – discontinued treatment due to adverse events. Sofosbuvir/velpatasvir side-effects were similar to those seen in the other ASTRAL trials. Four people taking ribavirin developed anaemia.

In summary, sofosbuvir/velpatasvir for 12 weeks resulted in a 95% SVR12 rate in people with HCV genotype 3 infection - showing it was statistically superior to sofosbuvir plus ribavirin for 24 weeks – and 91% for patients with cirrhosis.

Finally, Michael Charlton of Intermountain Medical Center in Salt Lake City and colleagues presented a late-breaking poster describing results from ASTRAL-4 (NCT02201901), which looked at patients of all genotypes with decompensated liver disease, which remains a challenging population. These findings were also published in the November 16 New England Journal of Medicine.

ASTRAL-4 included 267 patients with Child-Pugh-Turcotte (CPT) class B, indicating about a 20% risk of death in the next year. CPT scores are based on total bilirubin, serum albumin, prothrombin time, and presence of ascites (abdominal swelling) and hepatic encephalopathy.

About 70% were men, most were white and the mean age was 58 years. About 60% had genotype 1a, 18% had 1b, 15% had genotype 3, less than 5% had genotypes 2 or 4, and none had genotype 5. Just over half were treatment-experienced. The median CPT score was 8; about a third had a MELD score < 10, about 60% had a score of 10-15 and 5% had > 16, indicating severely impaired liver function. People with hepatocellular carcinoma and liver transplant recipients were excluded.

Overall SVR12 rates were 83% and 86% for patients treated with sofosbuvir/velpatasvir for 12 or 24 weeks, respectively, rising to 94% for those who added ribavirin. Looking at just genotype 1, the corresponding SVR12 rates were 88%, 92% and 96%. Response rates were lower for genotype 3 – only 50% using sofosbuvir/velpatasvir alone for 12 or 24 weeks, and 85% with ribavirin. Everyone with genotype 2, 4 or 6 was cured except one genotype 2 patient who died of liver failure. Two people (both with genotype 3) experienced viral breakthrough while on therapy and 20 relapsed after finishing treatment.

Treatment was generally safe and well-tolerated considering how sick the patients were. About 18% experienced serious adverse events, occurring with similar frequency across arms. The most common side-effects were fatigue (29%), nausea (23%) and headache (22%). Nearly a third of people taking ribavirin developed anaemia.

Taken together, the ASTRAL studies demonstrate that sofosbuvir/velpatasvir is highly effective against all HCV genotypes, including for patients with predictors of poorer response.