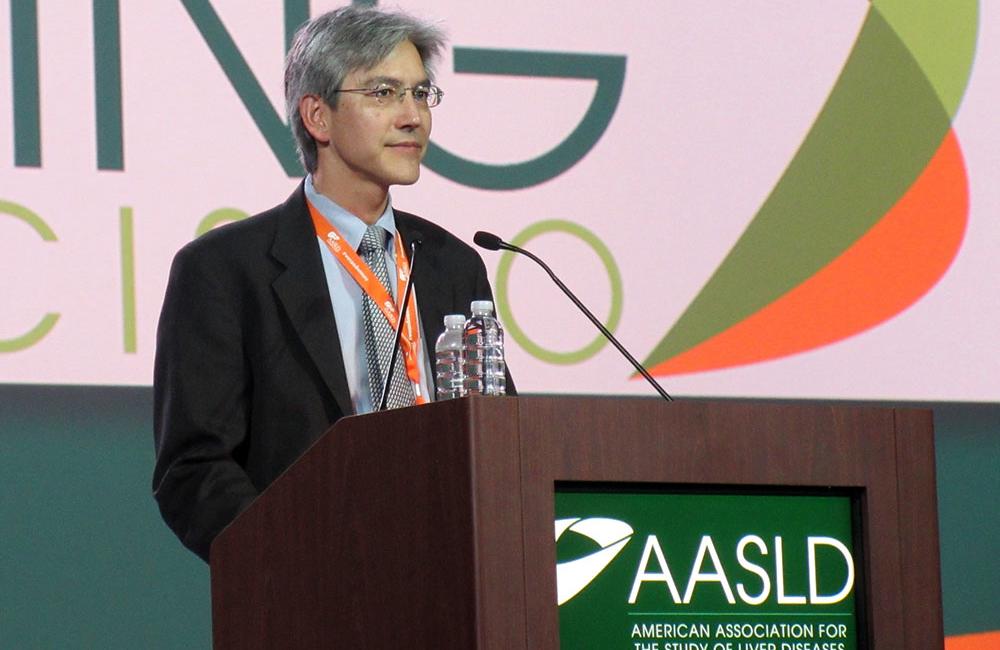 A combination of two experimental direct-acting antivirals developed by AbbVie cured 93 to 97% of people with genotype 3 hepatitis C infection after a 12-week course of treatment, Paul Kwo of Indiana University School of Medicine reported on Monday at the 2015 AASLD Liver Meeting in San Francisco.

Genotype 3 infection is associated with an increased risk of fibrosis progression and liver cancer (hepatocellular carcinoma) compared to other genotypes, making affordable and effective treatment options for this group of patients an important unmet need.

Genotype 3 hepatitis C infection is more difficult to cure than other genotypes of hepatitis C, requiring a longer course of treatment with most regimens. The only currently approved 12-week interferon-free regimen for treatment of genotype 3 consists of daclatasvir (Daklinza) and sofosbuvir (Sovaldi). Almost 30% of worldwide hepatitis C infections are estimated to be genotype 3, with a particular concentration in the Indian sub-continent and among populations of Indian origin living elsewhere. Genotype 3 is also widespread in the Russian Federation, Scandinavia, Thailand, Brazil and Australia.

An increase in viral load while on antiretroviral treatment.

The SURVEYOR-2 study assessed the effectiveness and safety of two experimental next-generation direct-acting antivirals, with or without ribavirin, at different doses. ABT-493 is an HCV NS3/4A protease inhibitor active against all genotypes of hepatitis C. ABT-530 is a NS5A inhibitor also active against all genotypes of HCV. Both agents are active against common variants that confer resistance to first-generation agents of their classes. ABT-493 is more potent against genotype 3 than other HCV protease inhibitors, including products being developed by Merck (grazoprevir) and Gilead (GS-9451), and ABT-530 has demonstrated higher potency than most other NS5A inhibitors across all genotypes.

The SURVEYOR-2 study recruited 120 people with genotype 3 infection, who were randomised to one of four 12-week regimens:

All agents were dosed once daily.

The study recruited previously untreated people or previous null responders to pegylated interferon and ribavirin, with no evidence of cirrhosis. There was some variation across study arm in demographic characteristics, notably in the proportion of men (48 to 63%) and F3 fibrosis (10 to 23%). The mean HCV viral load ranged from 6.3 to 6.7 log10/IU/ml across the four study arms.

The number of treatment-experienced participants in the study was very low due to the exclusion of people who had taken direct-acting antivirals in addition to pegylated interferon and ribavirin, and so it is difficult to draw meaningful conclusions.

Two severe drug-related adverse events were reported: one case of decreased haemoglobin in the ribavirin-containing arm and one increase in creatine phosphokinase (CPK) in the ABT-493 (300mg) and ABT-530 (120mg) arm. Commonly reported side effects were fatigue, headache and nausea, and most adverse events were mild or moderate. Laboratory abnormalities were most frequently reported in the ribavirin group (three cases of grade 2 haemoglobin decrease).

Genotype 2: no virological failures with ABT-493 and ABT-530

The SURVEYOR-2 study also contained a genotype 2 population in which a 12-week treatment course was tested at three different doses:

The study recruited 75 participants, randomised equally between the three arms. Eligibility criteria were the same as for the genotype 3 population.

Two participants experienced severe adverse events of headache which may have been study drug-related in the opinion of investigators, but in one case the headaches resolved within two days and in the other case, migraine headaches in a chronic sufferer became less severe and subsided more quickly after ribavirin dose reduction.

A combination of ABT-493 (300mg) and ABT-530 (120mg) will now be taken forward for further studies in genotype 2 populations, including patients with cirrhosis and those who have failed sofosbuvir/ribavirin, and an 8-week treatment course will be tested.