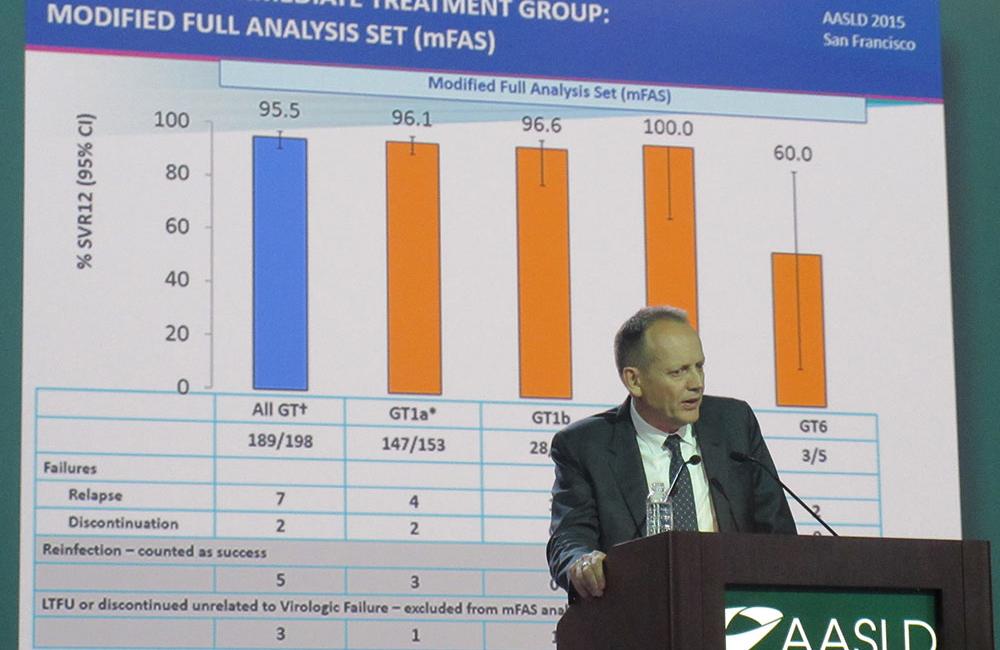 Merck's grazoprevir/elbasvir co-formulation cured hepatitis C infection in 92% of people who inject drugs (PWID) who received opioid substitution therapy in the C-EDGE CO-STAR study, according to a presentation on Sunday at the 2015 AASLD Liver Meeting in San Francisco. Participants maintained good adherence and had a high cure rate even though many continued to use illicit drugs.

Hepatitis C virus (HCV) is easily transmitted through sharing drug injection equipment, and current and former injecting drug users have high rates of infection (50% to 80% in some studies). But many providers and insurers still consider people who inject drugs to be poor candidates for treatment and active drug users have been excluded from most trials of new direct-acting antiviral agents.

CO-STAR enrolled 301 previously untreated people with HCV genotypes 1, 4 or 6 (including 76% with hard-to-treat HCV subtype 1a). About three-quarters were men, about 80% were white and the median age was 48 years. About one in five had liver cirrhosis and 7% were co-infected with HIV. Just over half had high HCV viral load at baseline (> 2,000,000 IU/ml).

Participants were required to be on stable opioid agonist therapy (mostly methadone) for at least three months and to have consistently kept at least 80% of their appointments. Urine screens were done to test for non-prescribed drug use – with nearly 60% testing positive at study entry – but people were not excluded or removed from the study on this basis.

Participants were randomly assigned (2:1) to receive either immediate treatment with grazoprevir/elbasvir as a once-daily fixed-dose co-formulation (100mg/50mg) or placebo for 12 weeks. At that point the study was unblinded and placebo recipients were also given active treatment on an open-label basis.

The researchers looked at both a full analysis population that included all participants, and a modified population that excluded people who discontinued the study for non-treatment-related reasons (such as loss to follow-up) or who became reinfected with a different viral type after HCV clearance. The primary study endpoint was sustained virological response, or continued undetectable viral load at 12 weeks post-treatment (SVR12), in the modified population.

The overall SVR12 rate for people who received immediate treatment in the full analysis population was 91.5%, rising to 95.5% in the modified population. Overall, seven patients relapsed, five were reinfected, two discontinued for treatment-related reasons and three did so for other reasons or were lost to follow-up.

The SVR12 rate was the same for people who had positive urine drug screens and those who had consistently negative screens (95.5% and 95.4%, respectively).

Response rates were also similar for men and women, for people over or under age 50, for people with high or low baseline viral load, and for participants with or without cirrhosis.

Use of illicit drugs during hepatitis C treatment was common, and the proportion of people who had positive urine drug screens remained stable during the 12 weeks of therapy. About 60% used any drugs (including cannabis, opiates, benzodiazepines, cocaine, amphetamines, barbiturates, phencyclidine or propoxyphene), falling to under half if cannabis was excluded.

Grazoprevir/elbasvir was generally safe and well-tolerated. Overall adverse events (83%) and serious adverse events (4%) occurred equally often in the immediate treatment and placebo groups. Two people in each arm discontinued due to adverse events. The most common side-effects in both groups were fatigue, headache, nausea and diarrhoea.

Based on these findings the researchers concluded that grazoprevir/elbasvir "demonstrated high efficacy in genotype 1 and 4-infected patients receiving opiate agonist therapy."

The sustained response rates and adherence levels seen in C-EDGE CO-STAR compare favourably to those of people who were not injecting drug users in the C-EDGE Treatment-naive and C-EDGE Treatment-experienced studies.

"The safety and high efficacy convincingly demonstrate the benefits of treating HCV within this population," said Dr Dore. "Such evidence should enhance access to new HCV therapies, including removal of restrictions to access in many settings based on illicit drug use. This study offers reassurance to providers who are concerned that patients who actively use illicit drugs will not be adherent to their chronic HCV treatment."

Dr Dore noted that the CO-STAR study has been extended to follow participants for two years to evaluate longer-term outcomes. He said Kirby Institute researchers are looking at drug injection networks to further understand and try to prevent HCV reinfection.