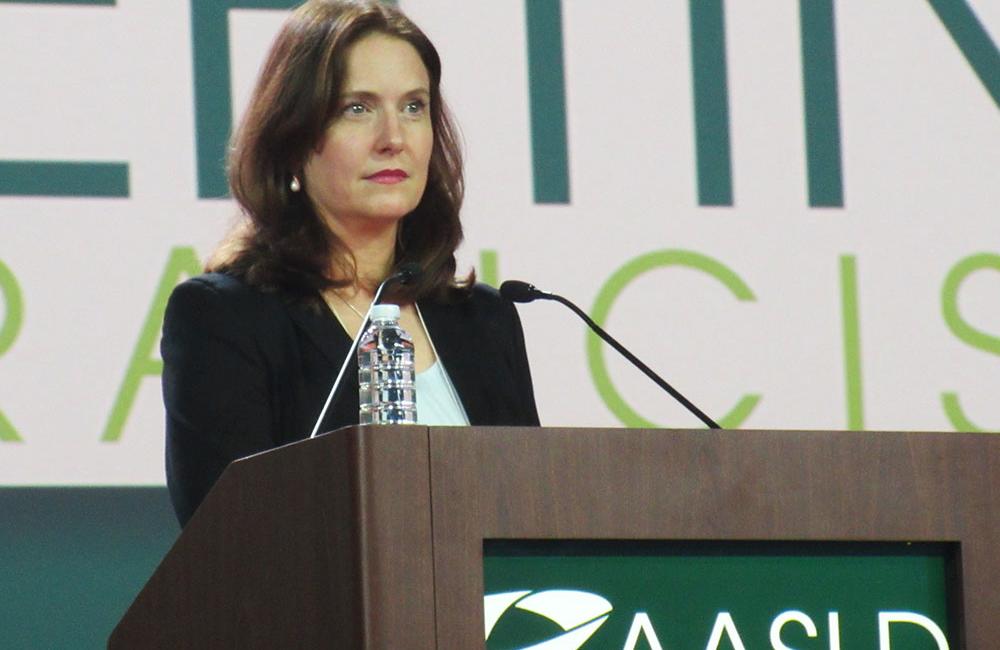 Tania Welzel, presenting at AASLD 2015. Photo by Liz Highleyman, hivandhepatitis.com
This article is more than 7 years old. Click here for more recent articles on this topic

Interferon-free treatment with daclatasvir plus sofosbuvir, with or without ribavirin, led to sustained virological response in a majority of people with genotype 3 hepatitis C virus (HCV) and advanced liver disease treated in a real-world setting in compassionate use programs in Europe, according to a pair of studies presented at the 2015 AASLD Liver Meeting last week in San Francisco, USA.

While interferon-free direct-acting antiviral therapy has revolutionised treatment for chronic hepatitis C, better options are still needed for people with HCV genotype 3. This genotype, which accounts for an estimated 30% of all hepatitis C cases worldwide, is associated with faster liver disease progression and is more likely than other genotypes to lead to cirrhosis and liver cancer.

Researchers reported findings from studies looking at people with genotype 3 who were treated with Bristol-Myers Squibb's pangenotypic HCV NS5A replication complex inhibitor daclatasvir (Daklinza) and Gilead Sciences' HCV polymerase inhibitor sofosbuvir (Sovaldi), with or without ribavirin, in two compassionate use programmes. Compassionate use allows people with urgent medical needs and no other treatment options to receive experimental therapies prior to regulatory approval.

In the previous ALLY-3 study, daclatasvir plus sofosbuvir taken for 12 weeks led to a 12-week post-treatment sustained virological response (SVR12) rate of 96% for people without cirrhosis, but only 63% for those with cirrhosis. As reported at the Liver Meeting, the follow-up ALLY-3+ study found that adding ribavirin increased cure rates to 88% with 12 weeks and 92% with 16 weeks of treatment. But good outcomes in clinical trials are not always reflected in real-world settings where patients may be more difficult to treat.

Tania Welzel of Goethe University in Frankfurt, Germany, presented findings from a multicentre compassionate use programme in the European Union (AI444-237).

Participants were treated with 60mg daclatasvir and 400mg sofosbuvir. Physicians had the option to add ribavirin, and this was done in 39% of cases. Most people were treated for 24 weeks but providers could opt for a shorter duration.

At 12 weeks post-treatment, 86% of people treated with daclatasvir and sofosbuvir alone, and 88% who added ribavirin achieved SVR12 in an intention-to-treat analysis. There was one viral breakthrough during treatment, six relapses, one discontinuation due to an adverse event and three deaths.

Response rates were about the same for people with cirrhosis treated with or without ribavirin – 86% vs 88%, respectively – but there were some differences according to liver disease severity. Among those using daclatasvir and sofosbuvir alone, SVR12 rates were 100% for CP class A, 80% for class B and 75% for class C. Conversely, among those who added ribavirin, response rates were 85%, 86% and 100%, respectively. A similar pattern was seen according to MELD scores.

A majority of participants in the study experienced adverse events – as expected for such a sick population – but treatment-related serious adverse events were uncommon (3% without and 5% with ribavirin). There were six adverse events leading to treatment discontinuation or death. No one experienced severe ALT or AST liver enzyme or creatinine elevations. Three people in the daclatasvir plus sofosbuvir arm and four who added ribavirin developed anaemia.

"In a real-life clinical setting, [daclatasvir + sofosbuvir with or without ribavirin] achieved high SVR rates (87%) in HCV genotype 3-infected patients at high risk of hepatic decompensation or death," the researchers concluded. "These findings suggest that [daclatasvir + sofosbuvir with or without ribavirin] is an effective and well-tolerated oral treatment for patients with genotype 3 infection, including those with most advanced disease."

Christophe Hézode from Centre Hospitalier Universitaire Henri-Mondor in Créteil, France, presented findings from a similar analysis of the large French Temporary Authorization for Use (ATU) compassionate use programme.

Patients eligible for the programme either had Metavir fibrosis scores of F3 of higher, or had severe extra-hepatic (beyond the liver) manifestations of HCV infection, post-liver transplant HCV recurrence or an indication for liver or kidney transplantation.

In this study, the safety analysis included 468 people with genotype 3 from more than 200 centres in France, while the efficacy analysis included 284 people (excluding 184 who had not yet reached 12 weeks of post-treatment follow-up).

This group was broadly similar to the European Union study population, but had less advanced liver disease overall. Three-quarters were men and the median age was 54 years; 14% had HIV and 7% had hepatitis B co-infection. A majority (73%) were treatment-experienced. Liver cirrhosis was present in 78%, of whom most (83%) had CP class A, 14% had class B and just 3% had class C. There were 24 liver transplant recipients and 25 people awaiting liver or kidney transplants.

People with stage F3 fibrosis had high response rates using daclatasvir and sofosbuvir alone regardless of duration (96% with 12 weeks and 100% with 24 weeks). Response rates with the dual regimen were lower for people with cirrhosis (70% and 86% respectively); however, adding ribavirin to 24-week treatment did not improve response (81%). People with CP class A had higher SVR rates than those with class B or C – 87%, 67% and 50%, respectively – with the greatest difference seen with the shorter treatment duration; only 33% of class B and C patients treated for 12 weeks were cured.

In this analysis, 9% of patients experienced serious adverse events, only two of which were considered treatment-related (liver decompensation and allergic dermatitis); three people discontinued treatment due to adverse events.

"In this real-world setting, [daclatasvir + sofosbuvir with or without ribavirin] for 12 or 24 weeks was well-tolerated and achieved high SVR12 in genotype 3 patients with advanced liver disease," the investigators concluded. "These results show the pangenotypic, all-oral regimen of [daclatasvir + sofosbuvir with or without ribavirin] is an effective and well-tolerated option for patients with genotype 3 infection and advanced liver disease."

Welzel TM et al. Safety and efficacy of daclatasvir plus sofosbuvir with or without ribavirin for the treatment of chronic HCV genotype 3 infection: Interim results of a multicenter European compassionate use program. AASLD Liver Meeting, abstract 37, 2015.

Hézode C et al. Daclatasvir plus sofosbuvir with or without ribavirin in genotype 3 patients from a large French multicenter compassionate use program. AASLD Liver Meeting, abstract 206, 2015.