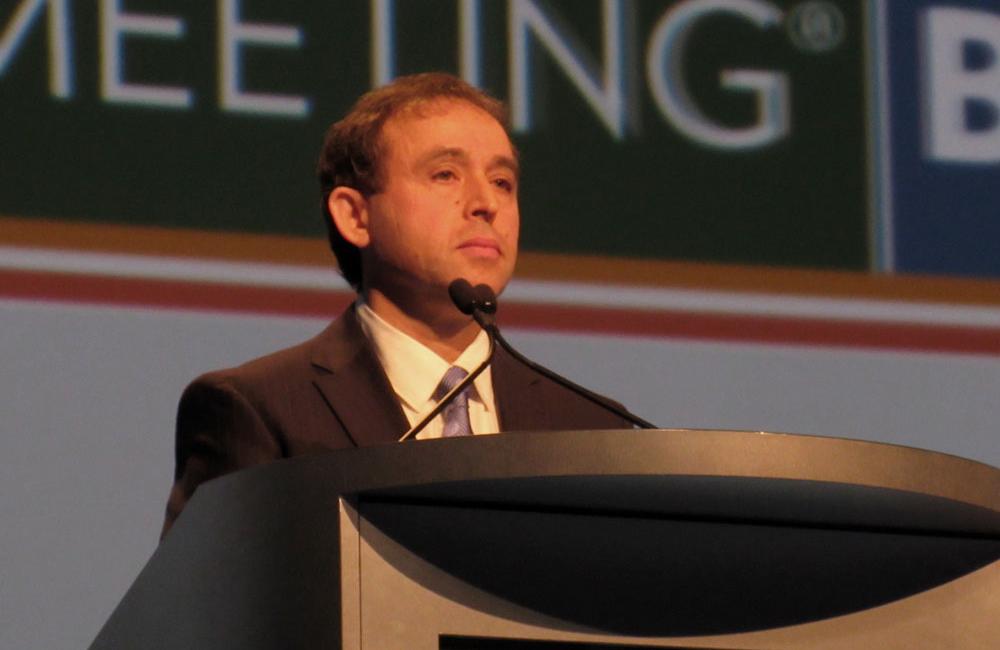 A 12-week oral combination of sofosbuvir plus the experimental NS5A inhibitor GS-5816 demonstrated high sustained virological response rates for people with difficult-to-treat HCV genotype 3 and other genotypes, according to phase 2 study findings presented at the American Association for the Study of Liver Diseases (AASLD) Liver Meeting last week in Boston. Reducing treatment duration to 8 weeks resulted in lower efficacy for people with HCV genotypes 1 and 2, though genotype 3 patients still showed high response rates.

The advent of interferon-free therapy using direct-acting antivirals that target different steps of the hepatitis C virus (HCV) lifecycle has brought about a revolution in treatment for chronic hepatitis C.

Gilead Sciences' nucleotide HCV polymerase inhibitor sofosbuvir (Sovaldi) is among the most effective of these new drugs. A dual combination of sofosbuvir plus ribavirin works well against easier-to-treat HCV genotype 2. The combination of sofosbuvir plus Gilead's first-generation NS5A inhibitor ledipasvir (a co-formulation recently approved and marketed as Harvoni in the US) is highly effective against HCV genotype 1, but it is not indicated for other genotypes.

Unlike ledipasvir – which is only active against HCV genotype 1 – Gilead's next-generation NS5A inhibitor GS-5816 is 'pan-genotypic', or active against multiple genotypes. In addition to more effectively treating people known to have HCV genotypes other than 1 or 2, a pangenotypic regimen could help increase access by eliminating the need for genotypic testing prior to treatment.

Stephen Pianko from Monash Medical Centre in Australia presented results from a phase 2 trial testing a 12-week regimen of sofosbuvir plus GS-5816, with or without ribavirin, for treatment-experienced genotype 1 or 3 patients with or without liver cirrhosis (study GS-US-342-0109).

In the era of interferon-based therapy, genotype 3 was once classified with genotype 2 as 'easier-to-treat', but it is more prone to resistance and does not respond as well to some direct-acting antivirals, requiring longer treatment or additional drugs. It is now also known that among people with genotype 1, subtype 1a is harder to treat than 1b.

Genotype 1 patients had previously been treated with pegylated interferon and ribavirin plus approved or investigational HCV protease inhibitors such as telaprevir (Incivo or Incivek), while genotype 3 patients had previously received pegylated interferon/ribavirin alone. A majority (72%) of prior treatment failures were attributable to on-treatment viral breakthrough or post-treatment relapse rather than null response.

Participants – stratified by genotype, and within genotype 3, by presence or absence of cirrhosis – were randomised to receive 400mg sofosbuvir plus GS-5816 at doses of either 25mg or 100mg, with or without ribavirin, all for 12 weeks.

Genotype 1 patients did well on all the tested regimens, with 96% to 100% achieving sustained virological response, or undetectable HCV RNA at 12 weeks after completing treatment (SVR12). Both GS-5816 doses worked equally well and addition of ribavirin did not improve response.

Among genotype 3 patients without cirrhosis, the SVR12 rate was 85% in the 25mg GS-5816 arm without ribavirin, rising to 96% with ribavirin. The 100mg dose, however, cured all participants with or without ribavirin (100% SVR12).

Across all patient groups and regimen arms, all treatment failures were due to post-treatment relapse, save for one withdrawal of consent. Genetic deep sequencing showed that everyone who experienced virological failure had NS5A resistance-associated viral variants, but no one showed evidence of polymerase resistance variants.

"Sofosbuvir + GS-5816 for 12 weeks resulted in high SVR12 rates in treatment-experienced genotype 1 or genotype 3 patients including those with cirrhosis," the investigators concluded.

"We were able to achieve very high SVR rates in some of the most difficult patients," Pianko said, adding that a potent enough combination appears to overcome viral resistance.

However, a speaker from the audience suggested that the numerically lower response rate without ribavirin among people with genotype 3 who had cirrhosis appears to support data from other studies reported at the meeting, showing that ribavirin may still be beneficial for the hardest-to-treat patients.

Two other presentations reported results from studies of sofosbuvir plus GS-5816 taken with or without ribavirin for 8 weeks. A shorter treatment duration is more tolerable and less expensive, but may increase the likelihood of relapse.

Tram Tran from Cedars-Sinai Medical Center in Los Angeles presented findings from a phase 2 trial (GS-US-342-0102) evaluating sofosbuvir plus GS-5816 for previously untreated patients with HCV genotypes 1 through 6 who did not have cirrhosis.

Based on these promising results, Part B evaluated a shorter treatment duration of 8 weeks in 120 genotype 1 patients (most with subtype 1a) and 103 genotype 2 patients. More than half were men, most were white, the mean age was 51 years and about one-third had unfavourable IL28B variants.

Again, they were randomly assigned to received sofosbuvir plus either 25mg or 100mg GS-5816, but this time they were also randomised to take this regimen with or without ribavirin, all for 8 weeks.

The researchers concluded that "SVR rates were lower and relapse rates were higher in genotype 1 and genotype 2 patients treated for 8 weeks compared to those treated for 12 weeks."

In this study, which included 104 participants, about two-thirds were men, most were white, the mean age was approximately 48 years and 25% to 56% had favourable IL28B variants. Almost all had HCV subtype 3a, with a few having 3k and several having an unknown subtype.

In all three studies, sofosbuvir plus GS-5816 was generally safe and well-tolerated with few serious adverse events or early discontinuations due to adverse events. The most frequently reported side-effects were headache, fatigue, nausea, diarrhoea, insomnia and itching or rash. Anaemia was observed more often in the ribavirin-containing arms, but was rarely severe.

These findings indicate that some patients are likely to be cured with only 8 weeks of treatment, but shortening therapy should be done cautiously. Among genotype 1 and 2 patients in Tran's study, neither the higher GS-5816 dose nor addition of ribavirin raised response rates into the now-expected 90% to 100% range using this short treatment duration. But in Gane's study of genotype 3 patients, no one using the higher GS-5816 dose, with or without ribavirin, experienced virological failure.

Based on these results, the 100mg dose of GS-5816 has been selected and combined with sofosbuvir in a co-formulation that will be tested for 12 weeks without ribavirin in phase 3 trials. SVR12 rates have ranged from 86% to 100% for patients across all genotypes treated with this regimen in phase 2 studies.

Gane EJ et al. Once daily sofosbuvir with GS-5816 for 8 weeks with or without ribavirin in patients with HCV genotype 3 without cirrhosis result in high rates of SVR12: the ELECTRON-2 study. American Association for the Study of Liver Diseases (AASLD) Liver Meeting, Boston, abstract 79, 2014.