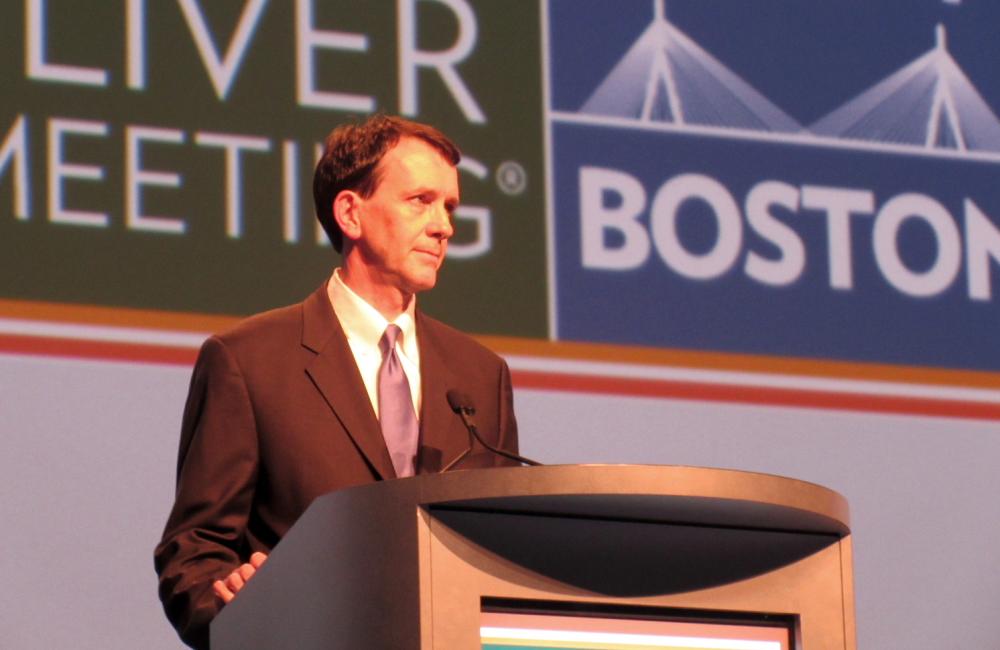 Andrew Muir speaking at the American Association for the Study of Liver Diseases (AASLD) Liver Meeting. Photo by Liz Highleyman, hivandhepatitis.com
This article is more than 8 years old. Click here for more recent articles on this topic

A 12-week all-oral regimen of daclatasvir, asunaprevir and beclabuvir, with or without ribavirin, cured 86 to 90% of genotype 1 hepatitis C patients with cirrhosis in the phase 3 UNITY-2 trial, while the TRIO regimen without ribavirin demonstrated similar sustained response rates for people without cirrhosis in UNITY-1, according to two late-breaking reports presented yesterday at the American Association for the Study of Liver Diseases (AASLD) Liver Meeting in Boston. Findings suggest that ribavirin is still useful for some people with harder-to-treat hepatitis C.

With the recent US approval of Harvoni (Gilead Sciences' sofosbuvir/ledipasvir) and the pending approval of AbbVie's 3D regimen (paritaprevir/ombitasvir/ritonavir + dasabuvir) – both of which are well-tolerated and cure well over 90% of genotype 1 patients – the bar has been raised for agents further back in the development pipeline. Although there is room for competition on price, any new regimen will have to be highly effective and easy to take with minimal side-effects.

Bristol-Myers Squibb's pan-genotypic (effective against multiple viral genotypes) NS5A inhibitor daclatasvir (Daklinza) was recently approved in the EU. An oral regimen of daclatasvir and the company's HCV NS3/4A protease inhibitor asunaprevir (Sunvepra) is approved in Japan, where most people with hepatitis C have easier-to-treat HCV genotype 1b.

As part of its phase three development programme, the multinational UNITY-2 trial tested the TRIO regimen in more than 200 people with chronic hepatitis C who have liver cirrhosis – a group with hepatitis that is more difficult to treat and often requires longer or more intensive therapy. Andrew Muir from Duke University School of Medicine presented late-breaking results on Monday.

A total of 112 previously untreated participants (treatment-naive) and 90 treatment-experienced participants were randomly assigned to take the TRIO regimen twice daily either with placebo or with weight-based ribavirin for 12 weeks. Participants were followed through week 24 to determine sustained virological response, or continued undetectable HCV viral load, at 12 weeks after completing treatment (SVR12), which is considered a cure.

About two-thirds of study participants were men, most were white and the median age was 59 years. About 70% of treatment-naive and 78% of treatment-experienced participants had genotype 1a and most had high baseline viral load. Three-quarters had unfavourable IL28B gene variants associated with poor response to interferon. All had cirrhosis confirmed by liver biopsies or non-invasive methods, and one-quarter had a platelet count <100,000/mm3, indicating advanced disease. In the treatment-experienced cohort more than one-third were prior null responders – the hardest group to treat.

Looking first at the previously untreated cohort, 93% of participants treated with the TRIO regimen alone and 98% who received TRIO plus ribavirin achieved SVR12. In the treatment-experienced cohort, SVR12 rates were 87% and 93%, respectively. Collapsing these groups, 90% of all patients who received TRIO alone and 96% who used TRIO plus ribavirin were cured.

Other factors including sex, age, baseline viral load, IL28B gene pattern and platelet count did not noticeably affect treatment response to either TRIO alone or TRIO plus ribavirin.

The TRIO regimen was generally safe and well-tolerated. There were two serious adverse events in the TRIO-only arm and seven in the TRIO plus ribavirin arm. Two ribavirin recipients discontinued therapy early due to adverse events, but both went on to achieve SVR12.

The most common side-effects reported by at least 10% of participants were fatigue, headache, nausea, diarrhoea, insomnia and itching. Most side-effects were more common in the ribavirin arms. Five per cent of ribavirin recipients, but no one taking TRIO alone, developed anaemia.

The multinational UNITY-1 trial tested the 12-week TRIO regimen without ribavirin, again using the twice-daily fixed-dose co-formulation; all participants received the same treatment. Results were presented in a late-breaking poster.

This study included 312 previously untreated and 103 treatment-experienced patients with HCV genotype 1 who did not have liver cirrhosis (non-cirrhotic). About 60% were men, most were white and the median age was 55 years. Seventy-three per cent had genotype 1a HCV, about 80% had high baseline viral load and three-quarters had unfavourable IL28B variants. In the treatment-experienced group, 38% were prior relapsers, 24% were null responders, 12% were partial responders and 10% were interferon-intolerant.

Again, the TRIO regimen was safe and well-tolerated. Seven people had serious adverse events and three discontinued early due to adverse events, but nevertheless went on to achieve SVR12. The most common side-effects were headache, fatigue, diarrhoea and nausea. No one developed anaemia using this ribavirin-free regimen.

In agreement with several other studies presented at the Liver Meeting, the UNITY findings suggest that there is still a role for ribavirin in hard-to-treat patients, including those with genotype 1a and cirrhosis. In particular, even when using potent direct-acting antivirals, ribavirin appears to help prevent relapse, as it does with interferon-based therapy.

"Even with the most recent HCV treatment advances, genotype 1 patients with cirrhosis remain difficult to treat," Andrew Muir stated in a BMS press release. "Currently, treatment-experienced cirrhotic patients still require a 24-week regimen to achieve high SVR rates. The data from this clinical trial [UNITY-2] using the daclatasvir TRIO regimen showed high cure rates for this population in a 12-week regimen, and has the potential to aid treatment adherence and provide a shorter treatment duration to achieve cure."

It remains to be seen in clinical practice whether hard-to-treat individuals will respond better to – or prefer – the addition of ribavirin, with its potential for added side-effects, rather than extending the duration of treatment.