In ELECTRON trial, 100% of hard-to-treat patients cured with sofosbuvir/ledipasvir plus ribavirin or GS-9669 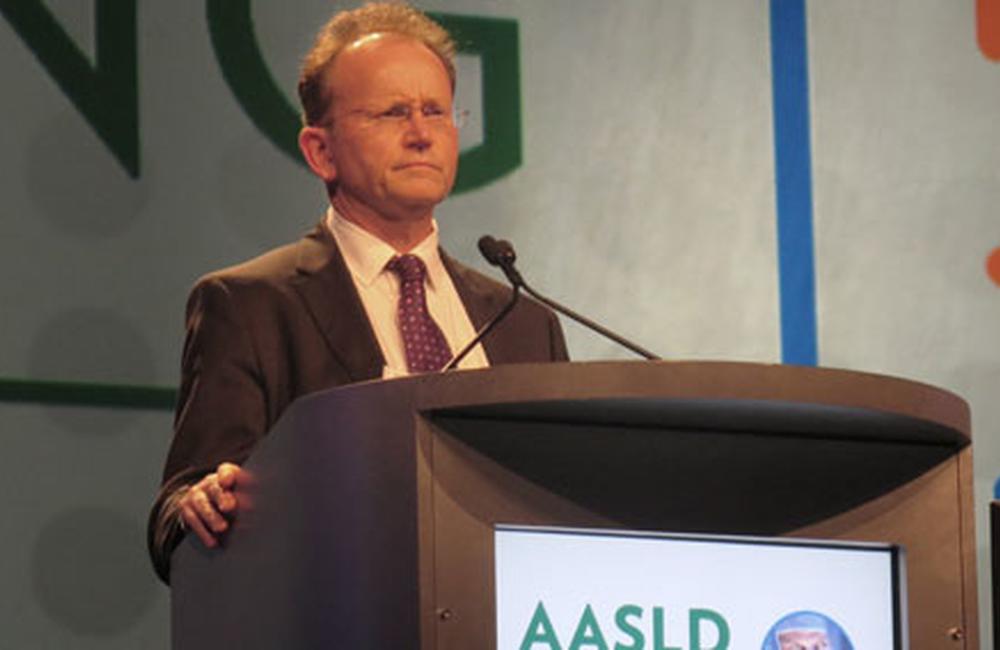 Edward Gane, of Auckland Clinical Studies, speaking at The Liver Meeting 2013. Photo by Liz Highleyman, hivandhepatitis.com
This article is more than 9 years old. Click here for more recent articles on this topic

Interferon-free regimens of sofosbuvir and ledipasvir plus either ribavirin or GS-9669 taken for 12 weeks produced sustained response in 100% of treatment-experienced people with genotype 1 chronic hepatitis C virus (HCV) with advanced liver fibrosis or cirrhosis, according to the latest findings from the ELECTRON trial presented yesterday at 'The Liver Meeting 2013', the 64th annual meeting of the American Association for the Study of Liver Diseases (AASLD) in Washington, DC. A related analysis of previously untreated people without cirrhosis found that reducing treatment duration to six weeks led to relapses.

A 12-week dual regimen of sofosbuvir plus ribavirin cures most people with easier-to-treat HCV genotypes 2 or 3, and an advisory committee of the US Food and Drug Administration last month recommended approval for this indication.

The dual regimen was not adequate, however, for prior non-responders with genotype 1. Researchers then tried adding the HCV NS5A inhibitor ledipasvir (GS-5885), finding that the triple regimen taken for 12 weeks produced a sustained virological response rate at 12 weeks post-treatment (SVR12) of 100% for both treatment-naive patients and prior non-responders without cirrhosis.

The analysis presented at the Liver Meeting by Edward Gane of Auckland Clinical Studies evaluated a once-daily fixed-dose tablet containing 400mg sofosbuvir and 90mg ledipasvir, taken with either ribavirin or the non-nucleoside polymerase inhibitor GS-9669, for the most difficult-to-treat group: treatment-experienced genotype 1 patients with advanced fibrosis or cirrhosis.

Researchers first enrolled 20 treatment-experienced genotype 1 patients with cirrhosis (Metavir stage F4) who were randomly assigned to receive the sofosbuvir/ledipasvir fixed-dose combination either with or without ribavirin for 12 weeks.

Next, 50 treatment-experienced genotype 1 patients with advanced fibrosis or cirrhosis (stage F3-F4) were randomised to receive the sofosbuvir/ledipasvir fixed-dose tablet plus either ribavirin or GS-9669, again for 12 weeks.

About 70% of treatment-experienced participants were men, about 90% were white and the mean age was approximately 56 years. About three-quarters had harder-to-treat HCV subtype 1a and about one-quarter had the favourable IL28B 'CC' gene pattern.

In the second comparison, 100% of patients with advanced fibrosis or cirrhosis achieved SVR12 when treated with sofosbuvir/ledipasvir plus either ribavirin or GS-9669. While response rates were the same in both arms, haemoglobin levels dropped significantly amongst people taking ribavirin but remained stable amongst GS-9669 recipients.

Researchers also aimed to determine a minimum effective duration of sofosbuvir/ledipasvir/ribavirin for easier-to-treat patients. This analysis enrolled 25 genotype 1 treatment-naive participants with absent to moderate fibrosis (stage F0-F2). All were treated with the sofosbuvir/ledipasvir fixed-dose tablet plus ribavirin for six weeks and compared against previously studied patients.

Just over half of the treatment-naive group were men, most were white and the average age was 51 years. Most (84%) had HCV subtype 1a and 20% had the favourable IL28B variant.

Several people treated for only six weeks relapsed after the end of therapy, resulting in a SVR12 rate of just 68%, compared with 100% of patients previously treated with the same regimen for either eight or 12 weeks. Gane noted that no baseline factors predicted which individuals would relapse and all had good initial viral declines on treatment.

Across all treatment arms sofosbuvir/ledipasvir alone or with ribavirin or GS-9699 was generally safe and well tolerated. Just one participant experienced a serious adverse event and no one discontinued treatment early due to side-effects.

"In treatment-experienced patients with advanced fibrosis/cirrhosis, either ribavirin or GS-9669 may enhance the efficacy of sofosbuvir/ledipasvir given for 12 weeks," the investigators concluded.

"The optimal duration of sofosbuvir/ledipasvir in treatment-naive genotype 1 patients (even with the addition of ribavirin) is more than six weeks," they added.

Gane EJ et al. Once daily sofosbuvir/ledipasvir fixed dose combination with or without ribavirin: the ELECTRON trial. 64th Annual Meeting of the American Association for the Study of Liver Diseases, Washington, DC, abstract 73, 2013.