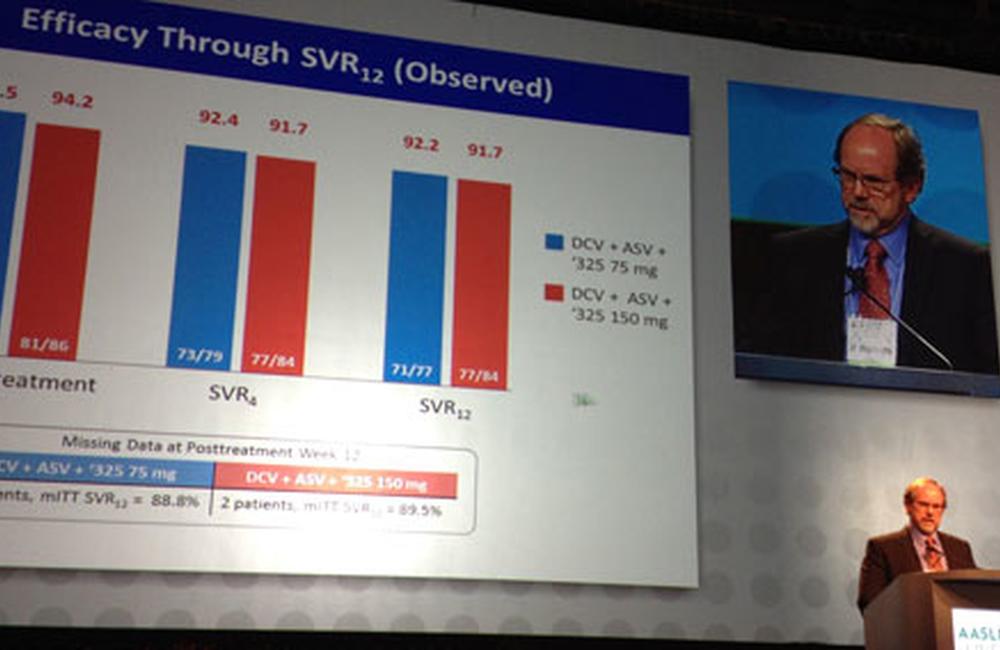 Gregory Everson of the University of Colorado speaking at The Liver Meeting 2013. Photo by Liz Highleyman, hivandhepatitis.com
This article is more than 9 years old. Click here for more recent articles on this topic

A combination of three direct-acting antivirals developed by Bristol-Myers Squibb cured chronic hepatitis C infection in over 90% of previously untreated patients in a mid-stage study, Gregory Everson of the University of Colorado reported at 'The Liver Meeting 2013', the 64th annual meeting of the American Association for the Study of Liver Diseases (AASLD) in Washington, DC, on Monday.

The combination proved equally effective in people with genotype 1a and 1b hepatitis C.

Bristol-Myers Squibb is one of several pharmaceutical companies working to develop a highly effective combination of oral direct-acting antivirals that can be used without interferon to cure hepatitis C infection with 12 to 24 weeks of treatment. Current hepatitis C treatment consists of pegylated interferon and ribavirin combined with a protease inhibitor, and lasts 24 to 48 weeks.

Interferon-free combinations contain drugs which attack different steps in the hepatitis C viral life-cycle, so that viral replication can be interrupted and quickly reduced, allowing rapid elimination of hepatitis C from the liver and the blood.

AbbVie, Boehringer Ingelheim, Gilead Sciences and Merck have also presented data on the progress of their own interferon-free combinations at this year’s AASLD conference.

The first interferon-free combination is likely to receive marketing approval for treatment of genotype 2 and 3 hepatitis C in December 2013 (sofosbuvir and ribavirin, manufactured by Gilead Sciences). AbbVie is likely to file for approval of its own interferon-free combination for treatment of genotype 1 infection in the United States and European Union in the second quarter of 2014.

Gregory Everson presented interim results of a phase IIb dose-comparison study designed to compare two doses of BMS-791325 (75mg and 150mg) for the purpose of selecting a dose for phase III studies.

Eight-two per cent of patients had genotype 1a hepatitis C infection and 38% had advanced liver disease (stage F3 or F4 fibrosis as measured by Fibroscan).

The two doses showed equivalent efficacy across all sub-groups (sub-groups, genotype 1a and 1b, IL28B CC and non-CC genotype) with the exception of people with cirrhosis, where the 75mg dose was associated with a higher rate of SVR (100 vs 71%) due to one treatment discontinuation and one viral breakthrough.

The combination was well tolerated. One person in each arm discontinued treatment due to an adverse event (one cancer and one episode of severe throat tightness). One person experienced a grade 3 liver enzyme elevation (AST) which normalised during treatment.

The 75mg dose of BMS-791352 will now be used as part of the three-drug combination in phase III studies.

Everson G et al. Phase 2b study of the interferon-free and ribavirin-free combination of daclatasvir, asunaprevir, and BMS-791325 for 12 weeks in treatment-naive patients with chronic HCV genotype 1 infection. 64th Annual Meeting of the American Association for the Study of Liver Diseases, Washington DC, abstract LB-1, 2013.