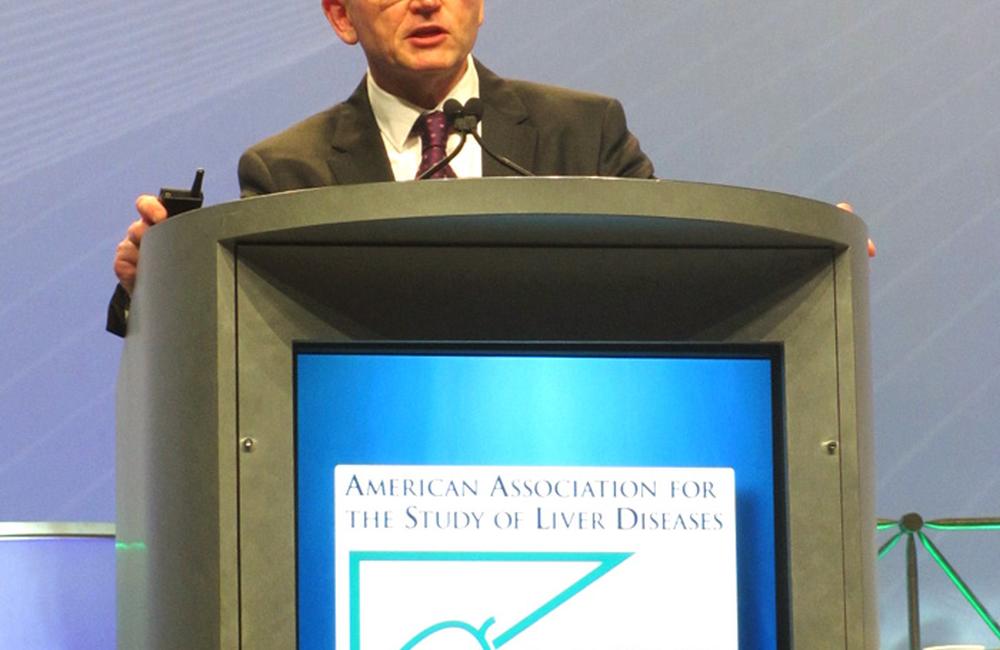 The hepatitis C polymerase inhibitor sofosbuvir produced high rates of sustained virological response in genotype 1 patients when combined with ribavirin and the HCV NS5A inhibitor GS-5885, according to data presented this week at The Liver Meeting 2012, the 63rd Annual Meeting of the American Association for the Study of Liver Diseases (AASLD) in Boston.

The recent approval of the first direct-acting hepatitis C drugs has ushered in a new era of treatment, but many patients and providers eagerly await all-oral therapy that avoids interferon and its difficult side-effects. Several combinations of new direct-acting agents are now under study, but response rates remain suboptimal for the most difficult-to-treat patients.

Gilead Science's sofosbuvir – formerly known as GS-7977, and before that as PSI-7977 prior to Gilead's acquisition of Pharmasset – is a once-daily uridine nucleotide analogue that blocks the activity of the HCV NS5B polymerase, which copies viral genetic material. Early studies showed that it has potent activity against hepatitis C, has a high barrier to resistance and is generally safe and well-tolerated.

Edward Gane from Auckland City Hospital in New Zealand described the latest data from the phase 2 ELECTRON trial, which is evaluating sofosbuvir in various interferon-free regimens.

As Gane reported at last year's AASLD meeting, a dual oral regimen of 400mg sofosbuvir plus 1000 to 1200mg weight-based ribavirin for 12 weeks led to 100% sustained virological response 24 weeks after finishing treatment (SVR24), the traditional definition of a cure.

The SVR24 rate was not much higher – 68% – for treatment-experienced genotype 2/3 patients (prior relapsers, partial responders and null responders combined) treated with the 12-week, standard-dose ribavirin regimen.

The ELECTRON team then proceeded to test sofosbuvir in people with more difficult-to-treat HCV genotype 1, looking at both treatment-naive patients and null responders to previous interferon-based therapy.

They looked first at the same combination of 400mg sofosbuvir once-daily plus 1000 to 1200mg ribavirin for 12 weeks.

As Gane reported at this year's Conference on Retroviruses and Opportunistic Infections, whilst all participants saw a rapid decline in HCV RNA and had undetectable viral load at the end of the 12-week course of treatment, almost all genotype 1 prior null responders relapsed soon thereafter, resulting in a very low cure rate.

Given that sofosbuvir plus ribavirin as a dual regimen is not adequate for this more difficult-to-treat patient population, researchers then asked whether adding a second direct-acting agent could increase cure rates.

Two additional ELECTRON arms were started to test a 12-week triple regimen of sofosbuvir plus ribavirin plus GS-5885, Gilead's HCV NS5A replication complex inhibitor, in treatment-naive patients and prior null responders. In studies to date GS-5885 has shown good activity against hepatitis C as well as a favourable safety and tolerability profile.

At this week's meeting Gane presented data from the four ELECTRON genotype 1 arms evaluated to date:

About 65% of study participants in the sofosbuvir/ribavirin arms were men; in the triple-therapy arms, only 32% of treatment-naive patients were men, rising to 78% for prior null responders. Across all arms most participants (80 to 100%) were white and the average age was approximately 48 years.

Nearly 90% of participants had difficult-to-treat HCV subtype 1a – typical of the hepatitis C population in Australia, Gane said. None had liver cirrhosis. Amongst treatment-naive patients assigned to either regimen, about 40% had the IL28B 'CC' gene variant associated with good interferon response; as expected, only 20% of null responders in the dual-therapy arm and none in the triple-therapy arm had this favourable pattern.

Both regimens were generally safe and well-tolerated. Side-effects were uncommon and mostly occurred with similar frequency across study arms.

There was one serious adverse event in the dual-therapy arm and two in the triple-therapy arm – none of them judged by investigators to be drug-related – and only one person in the latter group discontinued treatment early for this reason. No participants had severe grade 4 laboratory abnormalities.

Anaemia was more common (20%) in the treatment-naive triple therapy arm – the only one with high proportion of women – and about one-third of people in this arm had unexplained blood in their urine. None of the null responders taking the same regimen experienced either symptom, however.

As seen in the earlier ELECTRON arms, almost all participants experienced rapid virological response (RVR), or undetectable HCV viral load by week 4 of treatment. All patients – including the single individual who did not have RVR at week 4 – reached HCV RNA below 15 IU/mL at week 12, for an end-of-treatment response rate of 100% across all arms. No participants experienced viral breakthrough during treatment.

Outcomes diverged dramatically, however, after completing therapy. Amongst recipients of sofosbuvir/ribavirin dual therapy, four treatment-naive people and nine out of ten prior null responders experienced viral relapse within four weeks, yielding SVR4 rates of 88 and 10%, respectively.

In contrast, the three-drug regimen containing GS-5885 continued to work well. None of the 25 participants in the treatment-naive arm, nor the three patients who reached this time point in the null-responder arm, had relapsed by post-treatment week 4, so SVR4 rates remained at 100%. SVR12 rates are forthcoming.

Four weeks after the end of therapy is too soon to determine whether study participants are truly cured, but these results are promising given that most relapses in the dual-therapy arm occurred by this point.

Based on these findings, adding GS-5885 appears to prevent post-treatment relapse amongst people who fully suppress HCV during treatment. Ribavirin has a similar effect, though it was not adequate for genotype 1 patients in this study.

It will be interesting to see whether a dual regimen of sofosbuvir plus GS-5885 without ribavirin will produce similar results in difficult-to-treat patients, as the elimination of ribavirin could reduce side-effects, especially anaemia.

Another study presented at the AASLD meeting showed that a dual regimen of sofosbuvir plus a different NS5A inhibitor, Bristol-Myers Squibb's daclatasvir, also demonstrated high sustained response rates, and the addition of ribavirin did not add to its efficacy. Gilead indicated this past spring, however, that it would no longer pursue studies of the sofosbuvir/daclatasvir combination.

In a press release issued to coincide with this week's meeting, Gilead said it recently initiated a phase 3 trial, dubbed ION-I, to evaluate a fixed-dose coformulation of sofosbuvir plus GS-5885, with and without ribavirin, for 12 and 24 weeks duration, in treatment-naive genotype 1 hepatitis C patients.

Gane E et al. Once daily sofosbuvir (GS-7977) plus ribavirin in patients with HCV genotypes 1, 2, and 3: the ELECTRON trial. 63rd Annual Meeting of the American Association for the Study of Liver Disease, Boston, abstract 229, 2012.