Sofosbuvir and daclatasvir dual regimen cures most people with HCV genotypes 1, 2, or 3 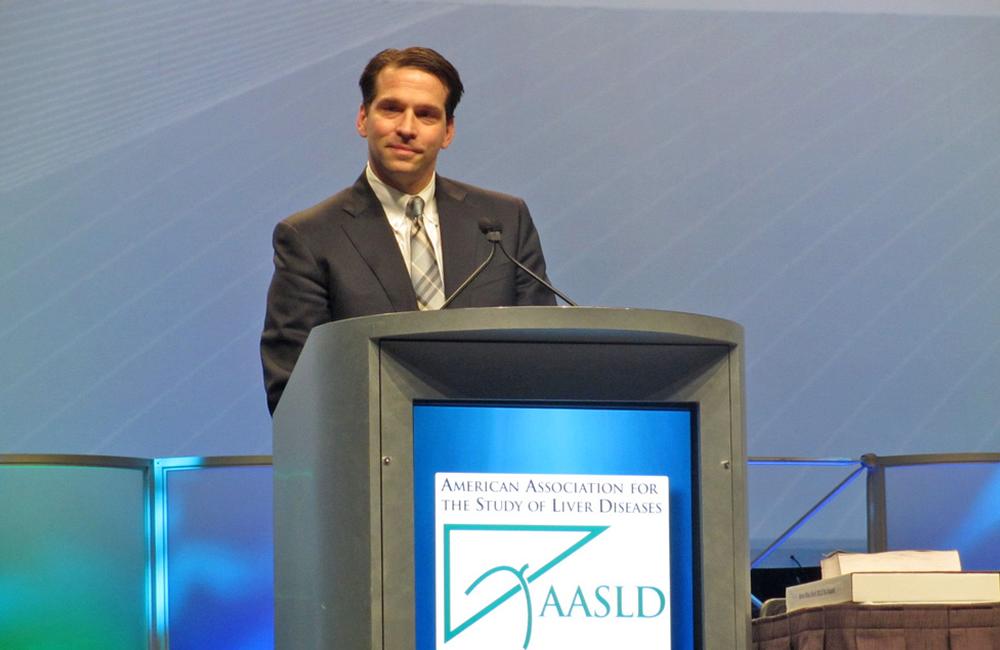 A 12-week, once-daily regimen of the hepatitis C (HCV) polymerase inhibitor sofosbuvir and the NS5A inhibitor daclatasvir, without interferon or ribavirin, produced sustained virological response rates for treatment-naive people in the 90 to 100% range, and appeared effective regardless of HCV subtype, IL28B host gene pattern or use of ribavirin, according to a late-breaker presentation this week at The Liver Meeting 2012, the 63rd Annual Meeting of the American Association for the Study of Liver Diseases (AASLD) in Boston.

Last year's approval of the first direct-acting hepatitis C drugs ushered in a new era of treatment, but many patients and providers are awaiting all-oral therapy without pegylated interferon and its difficult side-effects, and – if possible – without ribavirin, which causes anaemia.

It has become difficult to keep track of the numerous investigational anti-HCV drugs in the pipeline and the many different combination regimens under study, but one that stands out is Gilead Sciences' nucleotide analogue polymerase inhibitor sofosbuvir (formerly GS-7977 and before that PSI-7977) together with Bristol-Myers Squibb's first-in-class HCV NS5A replication complex inhibitor daclatasvir (formerly BMS-790052).

Although its mechanism of action is not fully understood, NS5A appears to play an important role in HCV replication in conjunction with the NS5B polymerase. Based on studies to date, NS5A inhibitors plus polymerase inhibitors may be particularly powerful combinations.

Dr Mark Sulkowski, from Johns Hopkins Medical School, and colleagues tested various all-oral combinations of sofosbuvir plus daclatasvir, with or without ribavirin, in an open-label phase 2a trial.

Because this was one of the earlier ribavirin-free regimens to be evaluated, researchers started with easier-to-treat patient populations and moved on to more challenging groups as they saw promising results. All study participants to date have been treatment-naive, a group with better prospects for a cure than non-responders to prior interferon-based therapy.

The first stage of the study looked at people with easier-to-treat HCV genotypes 2 or 3, randomising them to receive 400mg sofosbuvir plus 60mg once-daily daclatasvir – some with a seven-day sofosbuvir lead-in and some with the addition of 800mg ribavirin – for 24 weeks.

The second stage enrolled people with harder-to-treat HCV genotype 1, about 75% of whom had the most difficult subtype 1a. The first three of these arms received the same doses of sofosbuvir plus daclatasvir, with or without ribavirin, again for 24 weeks. Then two additional arms received the sofosbuvir plus daclatasvir combination, one group with and one without ribavirin, for 12 weeks to test if shorter therapy is feasible.

The study enrolled about 170 total participants in eight study arms. The median age was approximately 54 years. Gender distribution varied across arms, with men making up 36 to 69%. At least 70% were white in all study arms.

The proportion of participants with the favourable IL28B CC gene variant associated with good interferon response ranged from about 20% to nearly 60%; the figure is typically much lower when studying prior null responders. At baseline, approximately 40% had absent to mild fibrosis (Metavir stage F0-F1), about half had moderate to advanced liver disease (F2-F3) and roughly 15% had cirrhosis (F4).

Looking first at the genotype 2/3 participants, 100% achieved rapid virological response (RVR) at week 4 of treatment. This was a modified intent-to-treat, missing = failure analysis. People who missed one evaluation visit were considered lost to follow-up and not counted when calculating results at that time point; however, if they returned they were allowed to continue in the study and included in later evaluations.

After week 4, a single patient experienced viral break-though, one relapsed after treatment, one was temporarily lost to follow-up, and one was lost permanently. Sustained virological response rates at weeks 4, 12, and 24 post-treatment (SVR4, SVR12 and SVR24, respectively) ranged from 88 to 100%. The addition of ribavirin – which plays a role in preventing relapse after treatment – did not improve response rates.

Turning to the genotype 1 participants, all but one person receiving sofosbuvir plus daclatasvir with or without ribavirin for 12 or 24 weeks achieved RVR. That individual went on to suppress HCV with further therapy, so end-of-treatment response rates at week 12 or week 24 were 100% across the board.

Among genotype 1 participants treated for 12 weeks, SVR4 and SVR12 rates were 100% in all three regimen arms. All participants went on to achieve SVR24, except for one person who had measurable HCV RNA at post-treatment week 24. Viral genetic sequencing, however, revealed that the new virus was different from the original one, indicating re-infection rather than relapse.

The genotype 1 participants treated for 24 weeks were still undergoing follow-up. However, amongst the 68 participants who had reached post-treatment week 12, all achieved SVR12.

Sofosbuvir and daclatasvir were generally safe and well tolerated. The most common side-effects overall were fatigue, headache and nausea, with no clear patterns across treatment arms. Moderate-to-severe adverse events occurred somewhat more often in the 24-week lead-in arm and the arm receiving ribavirin for 24 weeks, but numbers were too small to draw definitive conclusions. But there was a clear association between use of ribavirin and anaemia: six and five participants in the two triple-therapy arms developed anaemia (haemoglobin < 9 g/dL), compared with none in the ribavirin-sparing arms.

In summary, the researchers concluded that sofosbuvir plus daclatasvir, with or without ribavirin, achieved SVR in more than 93% of participants with HCV genotype 1, 2 or 3. They added that virological response "did not differ according to IL28B genotype, viral subtype or the administration of ribavirin".

It remains to be seen how well sofosbuvir plus daclatasvir will work for prior null responders to interferon. Various other direct-acting HCV drugs under study looked good in treatment-naive patients but have not performed as well in this more difficult-to-treat group.

As promising as the sofosbuvir plus daclatasvir combination appears to date, its fate is uncertain. Earlier this year Gilead indicated that it would no longer pursue development of this particular regimen. Some have suggested that Gilead prefers to focus on combinations including its own investigational NS5A inhibitor GS-5885, allowing the company to produce coformulated combination pills – its speciality in the HIV arena.

Another study presented at the Liver Meeting showed that sofosbuvir plus GS-5885 plus ribavirin led to 100% SVR4 for genotype 1 treatment-naive patients and all null responders evaluated to date. Gilead is currently testing a new coformulation of sofosbuvir/GS-5885, with and without ribavirin, in treatment-naive genotype 1 patients.

Notwithstanding company decisions about which investigational agents to test together, once individual drugs are approved and marketed, clinicians and patients will be able to mix and match them.

Sulkowski MS et al. High rate of sustained virologic response with the all-oral combination of daclatasvir (NS5A Inhibitor) plus sofosbuvir (nucleotide NS5B inhibitor), with or without ribavirin, in treatment-naive patients chronically infected with HCV genotype 1, 2, or 3. 63rd Annual Meeting of the American Association for the Study of Liver Disease, Boston, abstract LB-2, 2012.