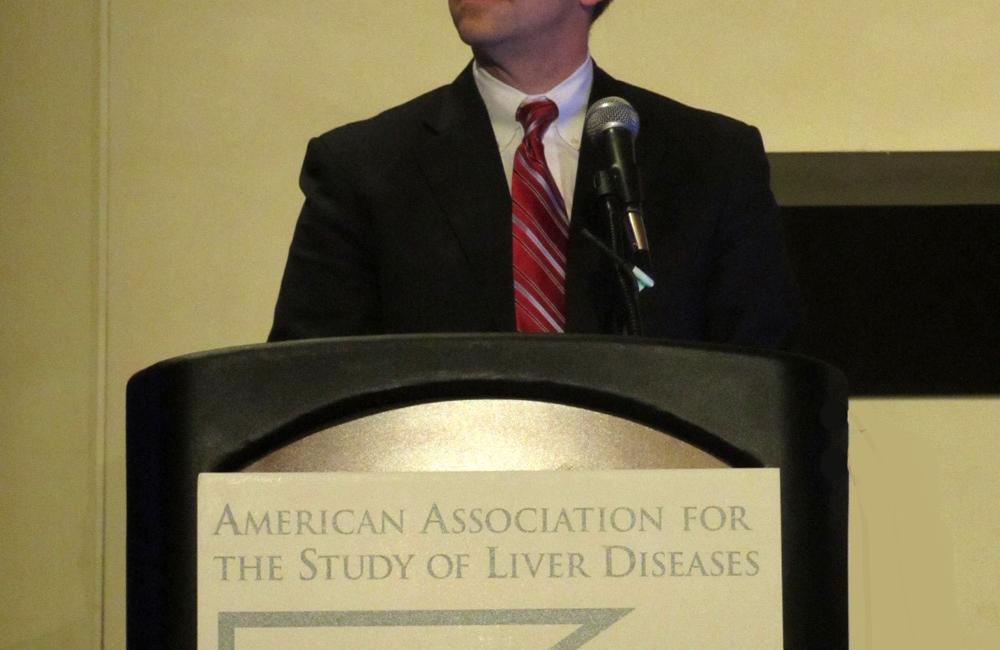 HIV/HCV co-infected people treated with telaprevir (Incivo) triple therapy are significantly more likely to achieve sustained virological response, or a cure, than those treated with pegylated interferon/ribavirin alone, according to final results from Study 110 presented yesterday at The Liver Meeting (the 63rd Annual Meeting of the American Association for the Study of Liver Diseases, or AASLD) in Boston.

Last year's approval of the first direct-acting hepatitis C drugs ushered in a new treatment paradigm. The hepatitis C virus (HCV) protease inhibitors telaprevir (produced by Janssen/Vertex) and boceprevir (Victrelis, produced by Merck) are licensed in Europe and the US for HCV monoinfected patients, but co-infected people also have a pressing need for better hepatitis C treatment, especially since liver disease tends to progress faster in this population.

The study had two parts. Part A included 13 co-infected participants with CD4 cell counts of at least 500 cells/mm3 who were not yet taking antiretroviral therapy, as recommended by antiretroviral treatment guidelines in effect at the time.

Part B included 47 co-infected people on antiretroviral treatment with stable HIV suppression (HIV RNA <50 copies/ml). On the basis of prior drug-drug interaction studies, they could be taking either efavirenz (Sustiva or Stocrin) plus tenofovir/emtricitabine (the drugs in Truvada) or ritonavir-boosted atazanavir (Reyataz), plus either lamivudine (Epivir) or emtricitabine.

Most participants (nearly 90%) were men and the average age was about 45 years. Part A included a higher proportion of people of African descent (a group that does not respond as well to interferon-based therapy). Overall, about 70% had the more challenging HCV genotype 1a (the rest had 1b) and just over 10% had advanced liver fibrosis or cirrhosis at baseline, though these factors varied widely across treatment arms. Median CD4 cell counts in Part A and B were approximately 600 and 500 cells/mm3, respectively.

Participants in both parts of the study were randomly assigned to receive either telaprevir or placebo in combination with 180mcg per week pegylated interferon alfa-2a (Pegasys) plus ribavirin (mostly an 800mg per day fixed dose). People assigned to atazanavir took the usual 750mg three-times-daily telaprevir dose. To compensate for a known drug-drug interaction that lowers telaprevir levels, those taking efavirenz increased their dose to 1125mg thrice daily.

Although HCV monoinfected people take telaprevir for variable lengths of time, according to a response-guided therapy algorithm, all co-infected participants in this study received triple therapy for 12 weeks followed by pegylated interferon/ribavirin alone for 36 more weeks.

Participants stopped treatment based on futility rules if they had HCV RNA greater than 1000 IU/mL or less than a 2 log10 decrease from baseline at week 12, or detectable HCV viral load at week 24 or 36, or if they experienced HCV breakthrough.

Among participants not taking antiretroviral therapy in Part A, SVR24 rates were 71 and 33%, respectively. In Part B, 69% of people using efavirenz and 80% of those using boosted atazanavir achieved SVR24 with telaprevir, compared with 50% for both antiretroviral regimens with pegylated interferon/ribavirin alone.

All these SVR24 rates were the same as the SVR12 rates reported previously, confirming that SVR12 is an accurate indicator of a cure.

Among the ten telaprevir recipients who did not achieve SVR, two (5%) discontinued due to stopping rules, one (3%) experienced post-treatment viral relapse, three (8%) had detectable HCV RNA at the end of treatment and four (11%) were lost to follow-up.

Overall, people taking telaprevir experienced more side-effects than those on pegylated interferon/ribavirin alone. Three people (8%) taking telaprevir, but none in the placebo group, discontinued treatment early due to adverse events.

Anaemia of any severity was equally common in both groups, at 18%. Whilst fewer telaprevir recipients had severe anaemia (3 vs 5%), they were more likely to receive blood transfusions (11 vs 5%) and erythropoietin-stimulating agents (8 vs 5%) to manage it.

No participants in either treatment arm experienced HIV breakthrough. Absolute CD4 counts fell in both arms – a known side-effect of interferon – but CD4 cell percentages did not change. Measured telaprevir concentrations were similar for people on ART and those not being treated for HIV.

"In the UK almost 9% of HIV positive individuals are co-infected with hepatitis C," Mark Nelson, Director of HIV Services at the Chelsea and Westminster Hospital, London, said in a Janssen press release. "For this patient group, new effective treatment regimens are particularly important due to their higher risk of developing liver complications compared to mono-infected individuals."