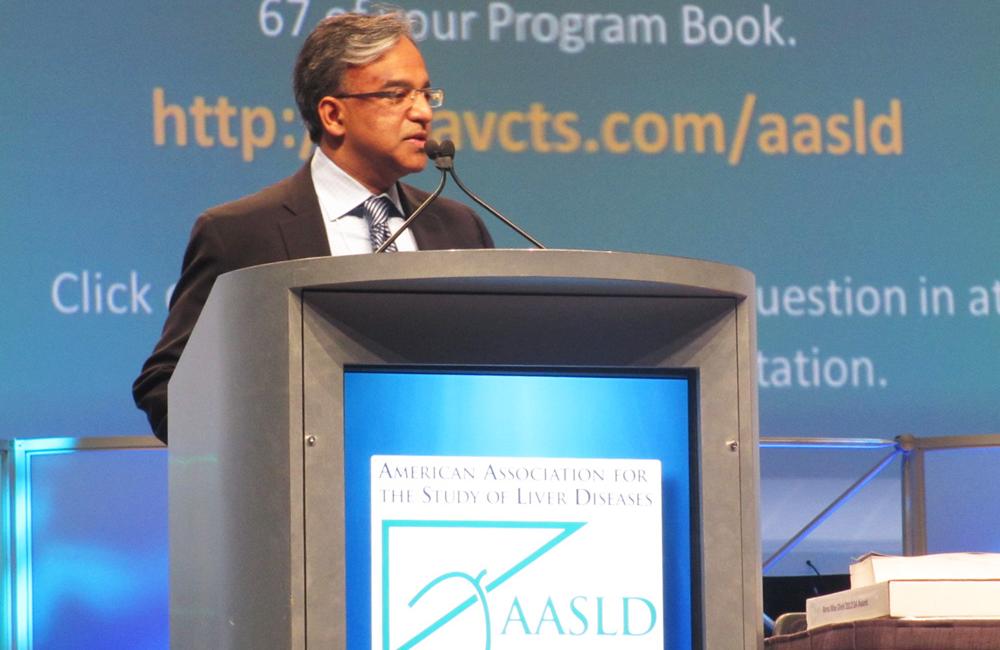 Over 79% of previously untreated and null responder patients with genotype 1a hepatitis infection achieved a sustained virologic response twelve weeks after completing treatment (SVR12) with an interferon-free combination of two or three directly-acting antivirals developed by Abbott, investigators reported on Monday at The Liver Meeting 2012, the 63rd meeting of the American Association for the Study of Liver Diseases (AASLD) in Boston.

In the group receiving all three drugs plus ribavirin, 96% of participants achieved a sustained virologic response twelve weeks after completing treatment, while only two out of 148 patients with HCV genotype 1b infection receiving any of the drug combinations tested in the study failed to achieve SVR12.

Investigators previously reported data on the use of Abbott drugs in interferon-free regimens for untreated patients at the European Association for the Study of the Liver conference in Barcelona in April 2012. Those studies looked at combinations of two drugs.

New data were presented today from phase II studies that recruited non-cirrhotic untreated patients with HCV genotype 1 and previous null responders to pegylated interferon and ribavirin, testing a combination of two or three direct-acting antivirals with or without ribavirin in patients with genotype 1 HCV infection.

Dr Kris Kowdley, director of the Liver Center of Excellence at Virginia Mason Medical Center, Seattle, presented results from the Aviator study, a phase 2b study designed to identify the optimal drug combinations for study in phase 3 licensing trials.

Treatment-naive participants received the HCV protease inhibitor ABT-450 in one of two doses (100mg or 200mg) boosted by ritonavir (100mg), an inhibitor of the CYP 3A4 enzyme, in order to raise plasma levels. This was combined with the NS5a inhibitor ABT-267 (25mg qd) and/or the non-nucleoside polymerase inhibitor ABT-333 (400mg twice daily) with or without ribavirin for eight or twelve weeks.

Previous null responders were randomised to one of two arms, a combination of ABT-450/r and ABT-267 with ribavirin, or to receive all three DAAs in combination with weight-based ribavirin.

Data were reported on SVR12 results in 448 patients. The data were presented by intent to treat, meaning that all participants who received at least one dose were assessed at each time point in the study and counted as treatment failures if they dropped out due to side-effects or missed study visits. This method of analysis is intended to better approximate the real-world effectiveness of a treatment regimen than an on-treatment analysis, which only captures those people who stayed on treatment – by definition, those who did best.

Most participants (358) were taking therapy for the first time. The remaining 90 had previously been treated with pegylated interferon and ribavirin. All the participants had genotype 1 infection and none were cirrhotic.

Most of the participants (56%) were men, their mean age was 50 years and two-thirds had genotype 1a infection.

In genotype 1a patients the best response rates were seen in individuals treated with the four-drug combination of ABT-450 (boosted by ritonavir), with ABT-267, ABT-333 and ribavirin. In total, 97.5% of treatment-naive participants taking this combination responded to treatment, as did 93% of previously treated patients.

Larger studies will be required to determine whether these rates of response can be reproduced in more diverse populations. Some interferon-free combination studies have seen differences in response according to IL28b 'CC' gene status, a predictor of response to interferon, but Dr Kowdley said that no substantial difference in outcomes had been seen in the Aviator study population.

The consistently high response rates in patients with HCV genotype 1b suggest that people  with this sub-genotype will be candidates for ribavirin-sparing regimens in the future, said Dr Kowdley. More research will be needed to determine the characteristics of people with HCV genotype 1a who are most likely to achieve a sustained virologic response on a three-drug DAA regimen without ribavirin. (HCV genotype 1a is the predominant sub-genotype in the United States; 1b predominates in Europe.)

Therapy was well tolerated. Only two participants (1%) stopped taking their treatment because of side-effects, and in both cases they subsequently resumed treatment and achieved a sustained virologic response. There were five serious adverse events, but only one, joint pain, was possibly treatment-related.

The most common side-effects were tiredness and headache. Side-effect incidence was similar between the treatment-naive and treatment-experienced patients, ranging between 27 and 31%.

The investigators were encouraged by these findings, concluding that the four-drug combination was effective and safe, regardless of prior treatment history.

Kowdley KV et al. A 12-week interferon-free treatment regimen with ABT-450/r, ABT-267, ABT-333 and ribavirin achieves SVR rates (observed data) of 99% in treatment-naïve patients and 93% in prior null responders with HCV genotype 1 infection. 63rd Annual Meeting of the American Association for the Study of Liver Diseases, Boston, abstract LB-01, 2012.