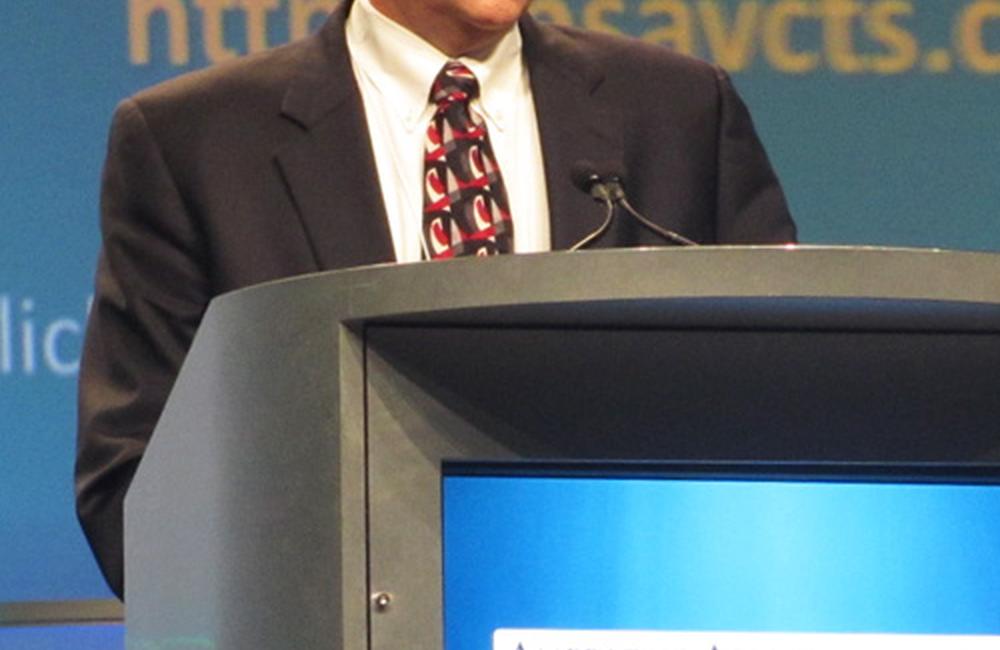 Dr Greg Everson of the University of Colorado © Liz Highleyman / hivandhepatitis.com
This article is more than 8 years old. Click here for more recent articles on this topic

Twelve weeks of treatment with a three-drug combination of new directly acting antivirals that contained neither pegylated interferon nor ribavirin led to a sustained virologic response 12 weeks after completion of treatment (SVR12) in up to 94% of previously untreated patients with hepatitis C genotype 1, in a preliminary phase 2 trial in 16 patients, Dr Greg Everson of the University of Colorado reported at the 63rd Annual Meeting of the American Association for the Study of Liver Diseases (AASLD) in Boston on Tuesday.

The combination of drugs, under development by Bristol-Myers Squibb, contained agents from three classes of directly acting antiviral: daclatasvir, an NS5A inhibitor, asunaprevir, a protease inhibitor, and BMS-791325, a non-nucleoside polymerase inhibitor.

The study was designed to provide preliminary information on whether adding BMS-791325 to asunaprevir and daclatasvir improved the efficacy of an interferon-sparing regimen in people with hepatitis C genotype 1a, and whether a higher dose of this drug had a substantial effect on efficacy. The study was also designed to test whether it was possible to shorten the treatment duration to twelve weeks when using this three-drug combination in all patients, or to shorten treatment according to sub-genotype.

Participants were then randomised to receive either 75mg or 150mg of BMS-791325, and then further randomised to either 12 or 14 weeks of treatment.

Sixteen treatment-naive patients were recruited to each arm of the phase 2a, open-label study. All had genotype 1 infection.

Their median age was 48 years, 75% were African American and mean baseline viral load was 6.26 log10 copies iu/ml. Only 28% of participants had the IL28B 'CC' mutation predicting favourable response to interferon-containing therapy, and 75% of participants had genotype 1a infection, both indicators of a harder-to-treat patient population.

Ninety-four per cent of participants in each group had a sustained virological response at four and twelve weeks after the completion of therapy respectively. In each arm, the non-responders were individuals who either withdrew from the study for reasons other than adverse events or viral breakthrough, or were lost to follow up.

By implication, all patients with HCV genotype 1a and a non-CC IL28 host genotype achieved a sustained virological response at week 4 or week 12.

Treatment was well tolerated. There were no discontinuations because of adverse events. The most common side-effects were headache, diarrhoea and general weakness. Each of these occurred in over 10% of patients. Only one serious adverse event was reported, but this was not thought to be due to the study treatment. No serious elevations (grade 3-4) in liver enzymes or bilirubin were observed.

“Further investigation of this regimen in the treatment of HCV is warranted,” the researchers concluded. Phase 3 licensing studies will begin shortly. Results of the higher dose 150mg arm are still awaited, as are longer term data that confirm the lack of viral breakthrough beyond four weeks after completion of treatment in the 24-week treatment group.