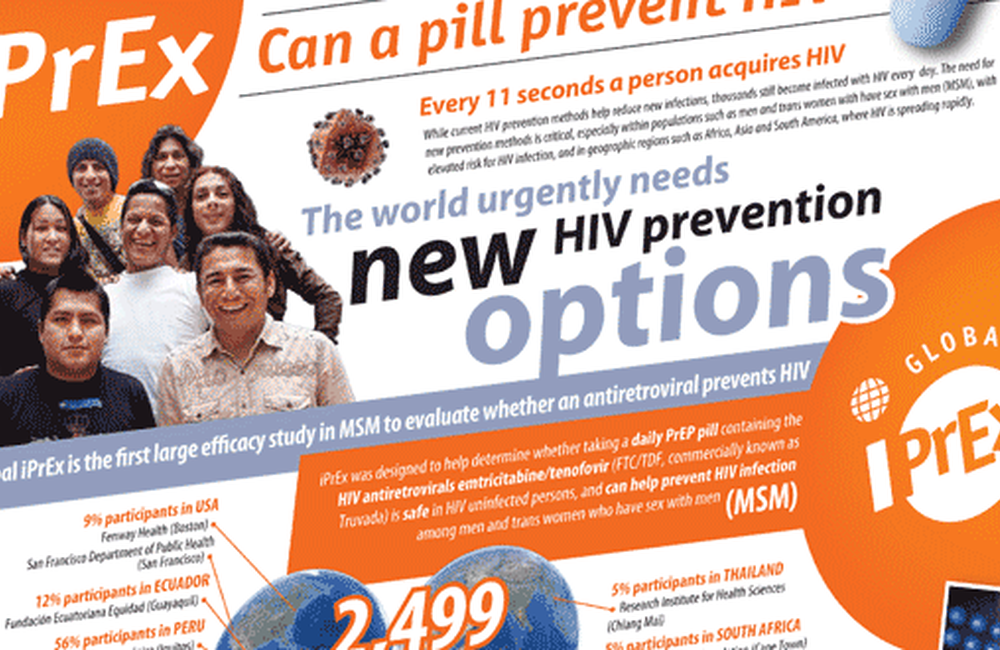 Detail from iPrEx materials (www.globaliprex.com).
This article is more than 12 years old. Click here for more recent articles on this topic

A randomised controlled trial has found that the HIV infection rate in HIV-negative gay men who were given a daily preventative pill containing two HIV drugs was reduced by 44%, compared with men given a placebo.

The efficacy in subjects who, by self-report and pill count, took the drugs more than 90% of the time was 73%.

The other big finding of the iPrEx (Pre-exposure Prophylaxis Initiative) trial was that while 93% of trial subjects reported taking the pills correctly, on the basis of drug level monitoring in blood tests, only 51% actually did so.

The investigators calculate that if participants had taken their pills every time, the efficacy of the drug regimen would have been at least 92%, compared with placebo.

The iPrEx trial gave identical pills containing either the antiretroviral (ARV) drugs tenofovir (Viread) plus FTC (emtricitabine, Emtriva), or a dummy placebo pill, to 2499 initially HIV-negative men who have sex with men at high risk of HIV infection, in nine cities in four continents. The men were told to take the pills once a day.

The trial subjects were told there was a 50% chance they might be taking a placebo and were therefore 'instructed’ to maintain safer sex. The men paid study visits every four weeks during the two-year study. At every study visit they were tested for HIV, asked about their risk behaviour, given adherence and safer-sex counselling, and provided with condoms.

Over 4900 subjects were screened, of whom 2406 were ineligible or never joined the study, 410 (8.5%) because they turned out already to have HIV. Patients with high liver enzyme or creatinine levels, indicating liver or kidney damage, were excluded.

The average age of the men enrolled was 27 and three-quarters classed themselves as Hispanic and/or of mixed race (participants could choose more than one category). Nineteen subjects (1%) classed themselves as female transgenders. Sixty-eight per cent came from Lima or Iquitos in Peru or Guayaquil in Ecuador: iPrEx was initially launched in these two countries and other study sites added later.

One notable finding was a high level of alcohol use in the trial subjects: over half (54%) had more than five alcoholic drinks per day.

Of note, the provision of safer-sex counselling and condoms worked: by the time of trial enrolment participants reported an average of seven partners in the last three months, and during the trial, this went down to two.

Few side-effects attributable to the study drug were observed. There was a higher level of nausea (9% versus 5%) in the first month in patients who took tenofovir/FTC, and the investigators advance this as a possible contributing factor to low adherence. Trial subjects gained weight, on average (due to maturing age in this young cohort), but in subjects on tenofovir/FTC the weight gain was delayed by three months relative to subjects on placebo. Nausea of grade 2 level or above (stronger or more long-lasting feelings of nausea) was experienced by 2% of the tenofovir/FTC group compared to 1% of the placebo group.

During follow-up 110 men tested HIV antibody positive. It was subsequently found, by doing viral load tests on stored blood, that ten of these subjects actually had acute HIV infection at the time of recruitment, which was not detected using HIV antibody tests.

Doctors’ notes showed that at least seven of these ten subjects had symptoms suggestive of acute HIV infection.

Of the ten participants who had acute HIV infection at baseline, three (one taking placebo) had HIV that was resistant to FTC when they were tested at week four of the study.The one taking placebo clearly had transmitted drug resistance (he had AZT and NNRTI resistance too): one appears to have acquired FTC resistance due to taking the PrEP drugs with a lot of HIV in his body (he had a viral load of 10 million at baseline): and one had a very low viral load at enrolment and could not be given a resistance test, so we cannot say if he developed resistance in response to PrEP.

No HIV drug resistance was found in any subject who acquired HIV during follow-up.

On the basis of pill counts and self-reports, study subjects would have been judged as taking their pills at least 86% of the time and on average over 95% of the time.

A surprise awaited researchers when they tested for drug levels. They did not do this with every trial subject but tested every subject who became infected with HIV and compared them with two uninfected, matched controls.

The drug level assays used could detect drug in the cells up to two weeks after a dose, indicating not only that far fewer subjects than reported were actually taking their pills, but that this was a long-term pattern and not caused by sporadically missing doses.

The investigators calculate on the basis of these figures that if all subjects had taken the study drug exactly as prescribed, the efficacy would be at least 92% and possibly up to 95%.

Why not only the poor efficacy, but the concealment of it? Other HIV prevention trials have shown that trial subjects adhere to their medication considerably less than they report. This may be influenced, the iPrEx investigators speculate, by knowledge that they may be on placebo or by side-effects. However qualitative surveys found that some of the participants found the style of adherence counselling “overbearing”, according to Principal Investigator Bob Grant, and a new non-directive style of adherence counselling will continue into the rollover study.

In pre-exposure prophylaxis, poor adherence is of concern because it might give rise to HIV drug resistance, although in this trial it appears that adherence in those who did acquire HIV was so low this did not happen.

An open-label rollover study, with all participants in the original study who wish to continue PrEP, will start in early 2011 and will report in 2013.

This is the first study to definitively prove that pre-exposure prophylaxis, as a concept, works. Under study conditions, it protected nearly half of a group of high-risk gay men who would otherwise have caught HIV. With good adherence, its likely efficacy would be considerably greater.

As such, especially in conjunction with the result of the CAPRISA 004 microbicide trial, is a major advance in the study of HIV prevention methods and potentially adds new prevention options.

Bob Grant commented: "I hope this will inspire and galvanise an active discussion in people who care about HIV prevention.

"We now have four positive signals on new methods of HIV prevention - circumcision, a vaccine, microbicides and now PrEP; we have the possibility of constructing an active portfolio of prevention methods for individuals, with the support of an engaged community.

"These were mainly young guys in the trials who were finding out who they were. These are the people PrEP will be useful for. We can say 'We want you to develop your own ways to protect yourself, but meanwhile, here's a pill that can maybe protect you while you're doing that.'"

For comments and interpretations of the iPrEx trial, see further reports.

We have previously reported research from the iPrEx trials on adherence to PrEP, presented at the Fifth International Conference of HIV Treatment Adherence in Miami. See Adherence to ARV prevention methods is challenging, partly because they don’t treat illness (27 May 2010).

For more information on pre-exposure prophylaxis (PrEP), visit the PrEP pages of our website.

For more information on the iPrEx trial, visit the iPrEx website: www.globaliprex.com