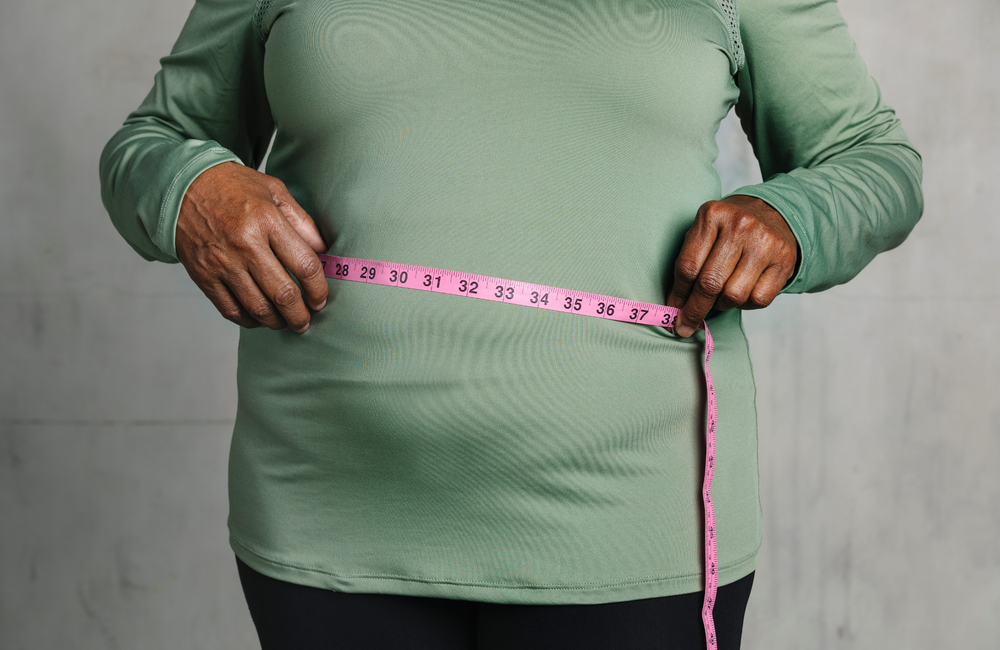 Around 40% of the women living with HIV in the UK aged 45-60 had a body mass index (BMI) greater than or equal to 30, considered obese, according to a study recently published in HIV Medicine. After controlling for other factors, researchers found that Black women were more likely to be obese than White British women.

Worldwide, obesity has tripled in prevalence since the 1970s, and in 2016, about 13% of the world’s population was obese. Obesity peaks in middle age for both men and women. Obesity more often impacts people with HIV, and a recent study found that 25% of people living with HIV aged 50 or older in the UK were obese. Weight gain contributes to heart, liver, and kidney disease in people with HIV.

Obesity in people living with HIV doesn’t have a single cause; rather it has a relationship with certain antiretroviral medications, immune restoration, behavioural factors, and social inequalities. Women with HIV are more likely to gain weight after starting antiretroviral therapy than men.

Menopause can also contribute to weight gain and redistribution of body fat. The number of people with HIV experiencing menopause in the UK has tripled in the last decade; however, little is known about the relationship between menopause and obesity among people living with HIV.

In the medical field, obesity is usually measured by body mass index (BMI), which uses height and weight to measure a person’s body mass and then categorises them as underweight, normal, overweight, or obese.

Critics of BMI note that BMI gives no insight into where fat is stored in the body, which is significant to health risks. The UK’s National Institute for Health and Care Excellence (NICE) recently updated their guidelines to recommend that even adults with “normal” BMIs should keep their waist measurement to half their height. Waist measurements can help identify central adiposity – or storing fat in the midsection – which is a risk factor for diabetes, high blood pressure, and heart disease.

Asma Ashraf of University College London and colleagues set out to measure how common obesity was in middle-aged women living with HIV in the UK and whether menopause or other factors were related to obesity. Of note, obesity in the study was measured by body mass index (BMI).

This analysis is part of the larger Positive Transitions Through the Menopause (PRIME) Study, a cross sectional, mixed methods observation study that looks at menopause in women living with HIV aged 45-60 years.

The PRIME study recruited women from National Health Service HIV clinics between 2016 and 2017. Participants completed questionnaires about demographic, health and social factors, while information on weight and height were taken from medical records. Eligible participants were those who assigned female at birth who had not had surgical menopause and those who had not gone five or more years without a menstrual cycle (period).

A total of 396 women with an average age of 49 were included in the study. The sample was largely reflective of women living with HIV in the UK. Most participants were of Black African ethnicity (72%), followed by White British (14%), other Black ethnicities, including mixed race and Caribbean (7%) and the rest had an ethnicity described as other (7%). Most (84%) participants were not born in the UK but did have secure immigration status (95%).

Nearly half of participants had finished school (47%) and a little over half (52%) were employed full-time, while a third had no employment. Thirty-eight per cent reported not having enough money for basic needs some or all of the time. As reported earlier, psychological distress and mental health problems were common among this cohort yet inadequately treated; this may be attributed to structural racism.

Menopause status was determined from self-report and was not confirmed biologically. Twenty-one per cent of participants were pre-menopausal (regular menstruation), 48% were peri-menopausal (irregular periods over the previous two years) and 31% were post-menopausal (no period for 12 months or more).

"The study did not find a link between socioeconomic factors and obesity, but the lack of detailed socioeconomic data is a limitation of the study."

The association between obesity and race/ethnicity is not unexpected. Overall in the UK 68% of Black adults are overweight or obese, higher than in other groups. Some possible contributing factors the authors mentioned include migration to an environment that is more likely to cause obesity; cultural factors including diet, lifestyle, and physical activity; and socioeconomic status.

This study did not find a link between socioeconomic factors and obesity; however, Ashraf and colleagues cited the lack of detailed data on these factors as a limitation of the study. The researchers didn’t consider factors such as food insecurity, diet and exercise. The study design, which did not allow the researchers to look at weight gain over time or to determine the direction between some associations, was another limitation of the study.

These findings underscore the importance of monitoring and recording BMI among middle-aged women in practice, since it’s likely that HIV and obesity have synergistic effects on co-morbidities, which can also be more likely post-menopause. The authors call for developing interventions that are culturally appropriate and acceptable to ethnically diverse women living with HIV for middle age and beyond, noting that their needs differ from men living with HIV.