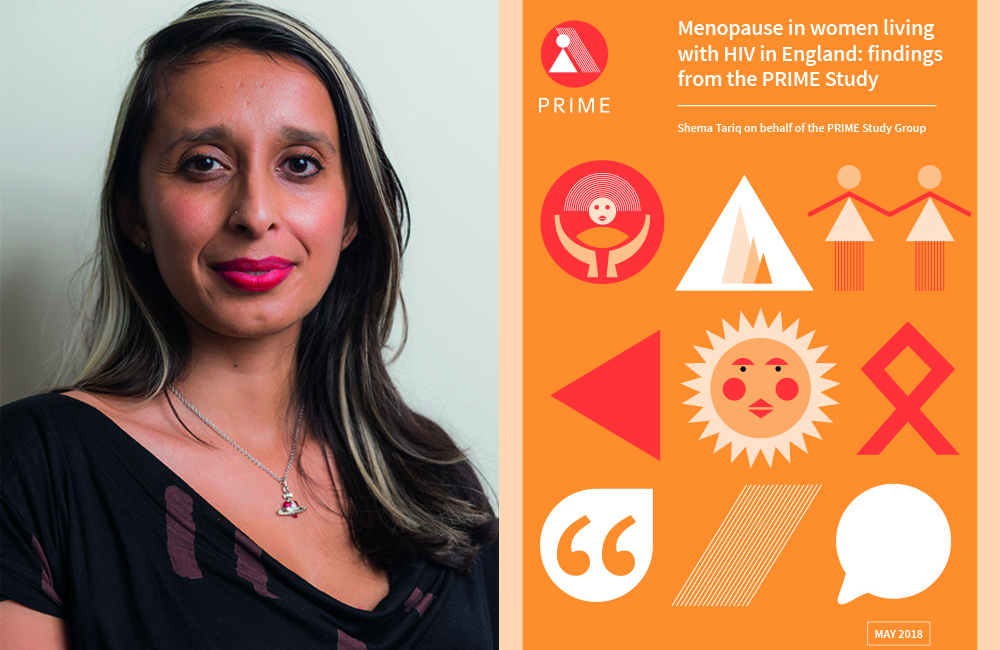 Take us back to the beginning of your research into HIV and menopause – why did you think this study was needed?

In the past, menopause wasn’t such an important consideration in HIV care, because women weren’t living long enough to experience menopause, but now it is increasingly becoming an issue. With advances in antiretroviral therapy, people are living long and healthy lives with HIV. If you look at women in particular, over the last decade we’ve seen a fivefold increase in the number of women living with HIV who are aged between 45 and 56, which is the age when you would expect women to go through the menopause. In 2016, there were 10,000 women in that age group accessing HIV care, which is about 1 in 3 of the women attending for HIV care in the UK. It’s a significant number and it’s going to increase as more and more women living with HIV reach their 40s and 50s.

The way you’ve gone about the research for PRIME is really interesting – could you explain the study design?

Something that is really critical to the design of PRIME is that it was co-produced with women living with HIV – they were integral to every stage of the study, right from the point when we put together the first grant proposal. Women living with HIV reviewed the proposal and the original study protocol. Then we worked with UK-CAB to recruit three community reps to sit on our advisory board – all women living with HIV aged over 45.

PRIME is a mixed-methods study, which means it combines quantitative and qualitative research. The reason we use that approach is because menopause is a complex thing and it’s really useful to look at it through different lenses. We wanted to use questionnaires to collect data (quantitative), but we also wanted to conduct interviews and speak to women, to really engage with their experiences (qualitative).

In the first phase, we held focus group discussions at Positively UK with women living with HIV aged 45 and over. Those discussions helped us design our questionnaire and they also provided us with some really useful preliminary information about women’s experiences. In phase two, with the help of 21 HIV clinics, we administered questionnaires to about 870 women living with HIV, aged 45 to 60, across England. In phase three, 20 of the women who had answered the questionnaire also took part in an interview, where I could explore their experiences in more depth.

The involvement of women living with HIV in this research is really key, and it’s been critical to the success of PRIME. To me, it feels like the right way to do research. It’s the way to produce robust, high-quality research that everyone is invested in. When we presented our results at our launch last month, it felt that we were doing it as partners, and all of us had an equal stake in it. In my opinion, that’s how research should be.

What were the key findings of the study?

Something that was really striking to me, which should be easy to address, is that nearly half of the women who completed the questionnaire said they didn’t have enough information about the menopause. That’s probably the same as the general population – I think women in general are underprepared for the menopause. But if you think about women living with HIV, this is a group who are engaged in healthcare, so we really should be doing better. They have opportunities to get that information. If we can’t get it right for this population, then who are we going to get it right for?

We also did a small survey of GPs, to look at management of HIV and menopause in primary care. Another key finding was that GPs reported lacking confidence in managing HIV and menopause. That’s important because often patients come to see us in HIV clinics and talk about menopause and we say, ‘you should go and see your GP’. But if they’re going to their GP and the GP isn’t feeling confident and is sending them back to us, then what you find is women being bounced between GPs and HIV specialists. In our qualitative research, women described being bounced back and forth for years sometimes, without their symptoms being addressed, and no one taking responsibility.

Finally, we found there was low use of treatments for menopause, with less than 10% of women using HRT (hormone replacement therapy). Only 3% were using vaginal oestrogen treatments, which are highly effective at improving vaginal symptoms and sexual function, plus they are cheap and have few side-effects. Again, use of HRT and vaginal oestrogen is low in the general population, but here we have a group of women who are seeing doctors regularly. They are often coming to sexual health services for their HIV care, so we should be in a position to be able to address sexual wellbeing and certainly to promote use of vaginal oestrogens.

The study has shone a light on gaps in terms of provision and has also highlighted things that may help. A key element is the importance of women having information about the menopause in good time. For clinicians, this could mean speaking to women about menopause and providing information such as the NAM factsheet from their 30s onwards, so they are prepared.

In the focus groups, something else that really struck me was that women talked about how powerful it was to be in a room with other women, listening to their experiences, and realising that what they were feeling was normal. It underlines the importance of peer support, something that we know works in HIV. It has such a great history in terms of HIV and pregnancy, particularly with the model of peer support we know as ‘mentor mothers’. We need to think about building upon that model and think about peer support across the life course. Not just in pregnancy, but as women get older and go through these other changes in their bodies and their lives.

One of our focus group participants said, wouldn’t it be great if we had ‘mentor aunties’? I think that’s brilliant. We’ve been trying to secure funding to set up a study looking at how best to design a ‘mentor auntie’ model of care and how to assess that in terms of efficacy.

What else are you planning for the future of PRIME?

At the moment I’m disseminating the study results as widely as I can. This is one of the largest studies we’ve ever done in the UK that focuses on women living with HIV. That in itself is really important to disseminate. It’s important that we have evidence out there about women, but it also demonstrates to academics and healthcare providers that do women living with HIV DO participate in research.

We plan to publish several papers over the next 6-12 months, but at the same time we have an eye towards where PRIME goes next. Now we’ve identified these gaps in care we need to be thinking about how we address them, and we’re looking at securing funding to investigate effective interventions. We also have a related biological study starting in the summer, funded by BHIVA, looking at measurements of hormone levels in women who are post-menopausal.

There haven’t been many studies looking at menopause and HIV in other European countries. I’d be really keen to hear from anybody who is interested in replicating this work. We’re very happy to share our questionnaire and our experience. If people in other countries used a similar questionnaire to ours, that opens up the possibility of pooling data and having a European-wide study.

Although our study was conducted in England, I think our findings will be relevant to other European countries with similar epidemics. When you’re going through the menopause and experiencing symptoms as well as already having to manage a long-term condition, that can be challenging wherever you are.

Read our factsheet on Menopause and HIV

Read more about the PRIME study results on aidsmap.com

This eFeature appeared in the June 2018 edition of the Eurobulletin.

More Questions Than Answers When Managing HIV and Menopause

Though menopause can be challenging for any woman, experiencing it with HIV adds another level of complication. On top of adhering to daily ART regimens, they must also deal with the hormonal changes of menopause and the symptoms that come with it.
Medscape (requires free registration)
23 Mar 22
Menopause

Although almost half of HIV-positive women in a large Canadian study had a major indication for menopausal hormone therapy (MHT), only small minorities had ever used or currently used such therapy. Clinician-led discussion of menopause independently tripled chances of MHT use.
NATAP
27 Sep 21
Menopause

Many people who experience menopause are not prepared by their health care providers—and for people living with HIV, it’s even more confusing. With a recently published guide and other outreach efforts, Sophia Forum aims to change that.
TheBody
2 Feb 21
More editors' picks