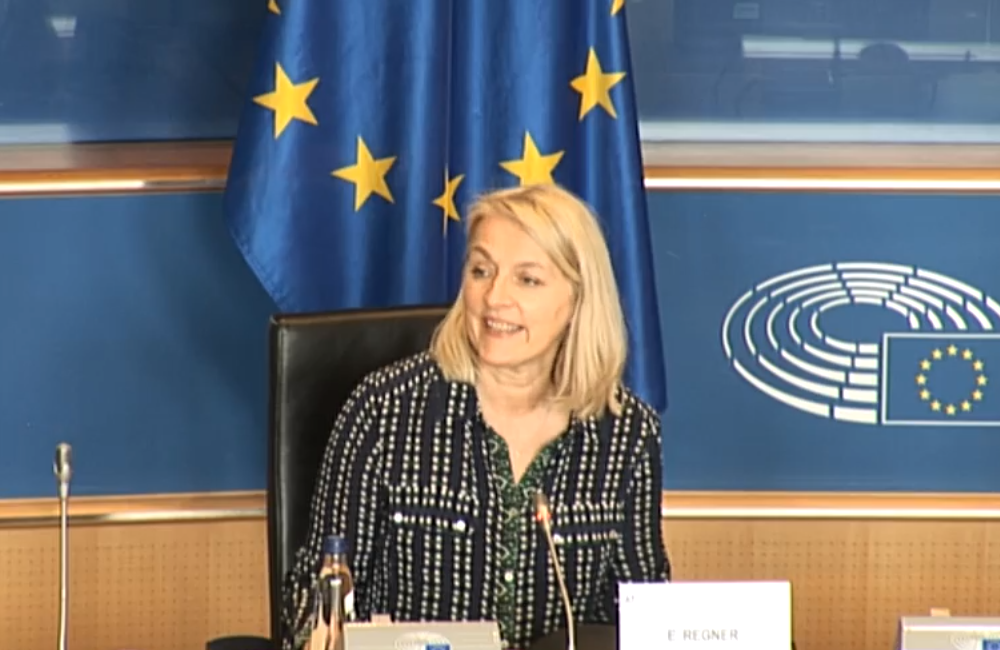 Over half of funding for anti-gender actors in Europe appears to come from within Europe itself, with significant amounts of money also flowing from the US and the Russian Federation, according to information shared at the European Parliament in March.

The public hearing on ‘Foreign interference on the financing of anti-choice organisations in the EU’ was hosted jointly by the Committee on Women’s Rights and Gender Equality (FEMM) and the Special Committee on Foreign Interference in all Democratic Processes in the European Union, including Disinformation (INGE).

For some years now, there have been reports of an increasingly organised movement in Europe against access to safe abortion and contraception, LGBTI rights, and sex education. This is visible in different forms, from increased violence and hate speech, to difficulties accessing funding for organisations, and regressive law-making.

These trends point to a growing backlash against women’s rights and gender equality, said Evelyn Regner, member of the European Parliament (MEP) and co-chair of the hearing. This movement is “specifically targeting women’s sexual and reproductive health and rights, while also promoting discrimination and violence against LGBTI people, with worrying consequences in some member states,” she said.

Regner, representing the women’s right committee of the European Parliament, FEMM, focused on the hearing’s need to learn about the financial flows to European anti-choice organisations, which are actively working to undermine women’s sexual and reproductive health and rights.

“It is intolerable for American or Russian actors to launch campaigns intended to call into question women’s right to decide on what happens to their own lives and bodies,” said Raphaël Glucksmann MEP, the meeting’s other co-chair. However, he also looked beyond the impact on women’s rights, as the INGE committee has been working on evaluating threats from foreign interference in the democratic process in different forms.

He said, “In recent history, we have seen that foreign powers use societal questions such as abortion legislation, women’s rights, or the protection of minorities in Europe, to impose their political agenda…and to artificially polarise our societies to a level of unrest that destabilises our democracies.”

Where is the funding coming from?

Neil Datta, secretary of the European Parliamentary Forum for Sexual and Reproductive Rights (EPF) presented findings from an EPF analysis of the financial statements of over 50 ‘anti-gender’ organisations. Datta explained that ‘anti-gender’ is a term used in this context to mean something broader than anti-choice: it includes being against the right to abortion, against LGBT rights, against children’s rights and against equality overall.

EPF accessed the financial statements of over 100 organisations, covering the period 2009 to 2018, finding detailed data on over 50. Full details will be published in an upcoming EPF report: Tip of the iceberg: Religious extremist funders against human rights for sexuality and reproduction in Europe.

The EPF analysis found that over US$702 million had been spent in the European region on anti-gender activity over the past ten years, with three important geographic sources of this finance – European countries, the Russian Federation, and the US.

Datta emphasised that this is an underestimate: “Of course there are enormous data gaps that cannot be filled at the moment, so $700 million is really the tip of the iceberg of how big this anti-gender movement is.”

Over 60% of funding for anti-gender actors in Europe comes from within Europe, highlighting the need to address the issue within the borders of the European Union as well as externally. The top two European funders are Fondation Jérôme-Lejeune, a French research foundation with a clear anti-choice stance, and Tradition, Family, Property, a Catholic fundamentalist network involved in the anti-abortion legislation in Poland (see previous report from EPF).

Money from the United States

EPF identified US$186 million of funding coming from the Russian Federation and US$81 million from the US, with smaller amounts from other countries including Mexico and Qatar. The funding identified is not from governments, but from private individuals and foundations.

The US financing comes mainly from ten key Christian Right organisations, usually funded by private individuals linked to far-right and libertarian causes in the US. They seek to actively influence European institutions and their presence in Europe has become significant.

“Over the last seven years, they’ve established a network of offices in Europe – in Brussels, Geneva, London, Strasbourg, Rome and Vienna,” Datta said. “Those cities are not selected randomly, [they are] the centres for human rights decision-making across Europe. So not just the EU, but the UN, OSCE [the Organization for Security and Co-operation in Europe], Council of Europe, and the courts.”

Money from the Russian Federation

Datta then set out the findings relating to the US$186 million identified as coming from Russian sources. He highlighted two oligarchs in particular, who he described as having set up ‘influence factories’, which engage in forms of advocacy and outreach. Another source of funding is referred to as ‘laundromats’, moving illicit money from the Russian Federation to Europe. The third source is in the form of agencies set up by the Russian government, active in what Datta described as “anti-gender soft diplomacy”.

The EPF analysis also identified trends. In the past decade, annual spending on the anti-gender movement has increased 400%, with Russia appearing as a new actor, and an increase in funding from within Europe and from the US.

Where is this money being spent?

EPF identified five elements, which together make up an “anti-human rights infrastructure”.

Clare Provost, global investigations editor at political news website OpenDemocracy presented the results of research into US funding in this area. Since 2017, OpenDemocracy has been co-ordinating an investigation of opposition to sexual and reproductive health around the world, called Tracking the backlash.

Probably the most well-known example of current opposition to women’s reproductive rights in Europe is in Poland, where there have been multiple legal challenges to women’s rights and large public protests in recent years. For example, in 2020, Poland’s constitutional court voted to ban abortion in cases of foetal anomalies.

“Polish voices were not the only ones involved,” Provost told the hearing. “The European branch of a large US conservative legal group also submitted arguments to the Polish court in favour of the ban”. The group in question is the American Center for Law and Justice, which, according to the investigations by OpenDemocracy, has spent more than US$14 million in Europe since 2007.

A second US conservative legal group, Alliance Defending Freedom (ADF), has also spent millions in Europe. These two groups “have intervened in dozen of European court cases, including those against abortion and defending doctors who refuse to provide contraception,” Provost said.

The OpenDemocracy investigation found that ADF claims to have had 18 ‘wins’ at the European Court of Human Rights since 2010 and spends 300,000 euros annually on EU lobbying.

In 2020, OpenDemocracy looked at 28 US groups that oppose sexual and reproductive rights and that work internationally. They were surprised to find that Europe was where most of their money was spent. Working with in-country investigative journalists, they followed the money to the European courts and to work on the ground. All the data from this investigation are available on the project website, searchable by region, year and categories.

As with the EPF analysis, Provost was keen to highlight that there are limitations to the data and that the actual amount of money coming into Europe from the US will be much larger.

“The fact that we’ve produced some of the first analyses of this spending, really does show for us just how unscrutinised these issues have been, despite the really strong public interest in monitoring organised threats to women’s rights,” she said.

An important aspect of this issue is the proliferation of misinformation. For example, OpenDemocracy found that women across Europe are targeted with misinformation by projects affiliated to a large Christian Conservative group, Heartbeat International. The projects establish crisis pregnancy centres that aim to stop women from having abortions.

Heartbeat International has more than 400 affiliates in Italy, including many embedded within hospitals and healthcare centres. One undercover reporter was told by activists inside an obstetrics ward that having an abortion can cause cancer, and that having a baby can cure serious illnesses, including leukaemia.

Provost said, “At almost every affiliate investigated by OpenDemocracy, our undercover reporters were told similar misleading or incorrect claims about their health and/or they were made to feel guilty about having a legal abortion and pressured to do otherwise.”

The same group also promotes so-called abortion pill reversal – an unproven and potentially dangerous treatment that it claims can reverse a medical abortion. OpenDemocracy has launched a new investigation into this issue.

Provost concluded: “These issues we are discussing today have long been under-scrutinised by journalists as well as by policymakers, despite the scale of the threat they pose to women’s rights.”

Watch a recording of the hearing on the European Parliament website.

This eFeature appeared in the May 2021 edition of the Eurobulletin.

The Court’s decision means that, unless the judgment is successfully overturned on appeal, section 26 of the Sexual Offences Act remains valid law in Kenya.
KELIN
25 Jan 23
Human rights

The Indonesian government must fulfil its duties and responsibilities as mentioned in international human rights instruments that it has ratified. It should stop engaging in expedient compromises for the sake of short-term political gains.
APCOM
13 Jan 23
HIV & criminal law

The High Court in Kenya has dealt a blow to the fight against the HIV response, by dismissing a petition that challenged the criminalisation of all forms of deliberate transmission of HIV.
HIV Justice Network
30 Dec 22
More editors' picks