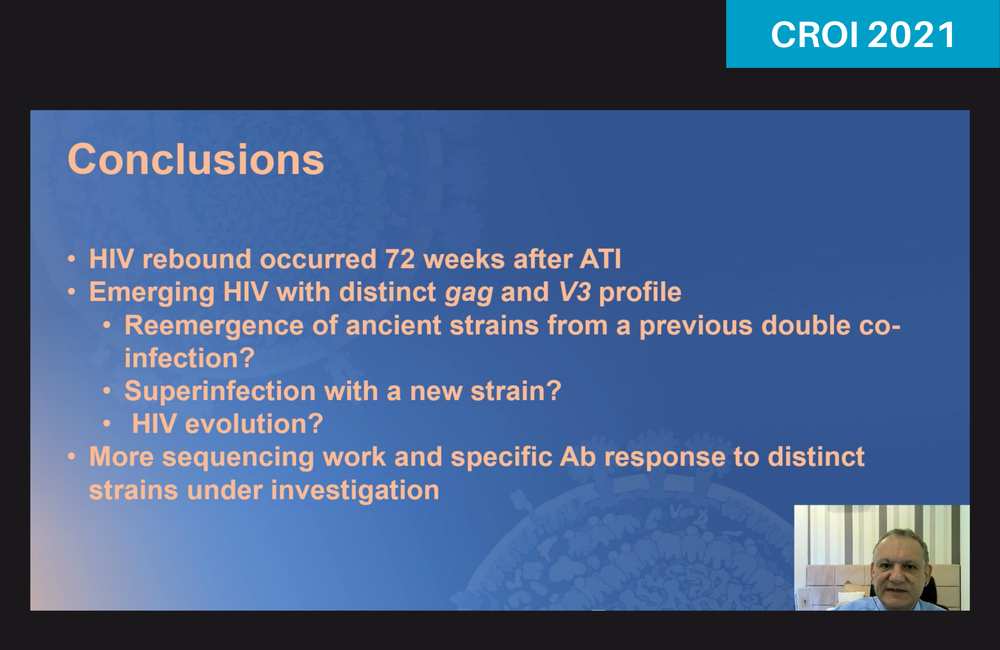 A Brazilian man who last summer had no evidence of remaining HIV after more than 15 months off antiretroviral therapy once again had detectable viral load a few months later, according to a report last week at the virtual Conference on Retroviruses and Opportunistic Infections (CROI). Work is underway to determine whether he experienced viral rebound or reinfection.

The case was reported with much fanfare at the 2020 International AIDS Conference (AIDS 2020), with claims that the man could be the first person to achieve a functional cure without a stem cell transplant.

So far, two people appear to have been cured of HIV after receiving bone marrow transplants to treat advanced cancer. Both received stem cells from a donor with a rare genetic mutation known as CCR5-delta-32 that prevents most types of HIV from entering cells.

Timothy Ray Brown, formerly know as the 'Berlin patient', had no evidence of replication-competent HIV anywhere in his body for more than 13 years; Brown died last September due to a relapse of leukaemia. At last report, the second man, Adam Castillejo, dubbed the 'London patient', still had no detectable virus after more than three years off antiretroviral therapy.

But stem cell transplants are too dangerous for people who don't need them to treat life-threatening cancer. What's more, the intensive and costly intervention could probably not be scaled up enough to make it feasible for the millions of people living with HIV worldwide.

As aidsmap.com reported last July, the 35-year-old 'São Paulo patient' was a participant in a clinical trial that evaluated several intensified drug regimens in an effort to reduce the size of the HIV reservoir – thought to be key to a functional cure, or the ability to remain off antiretrovirals long term without viral rebound.

The man was diagnosed with HIV in October 2012. At one point his viral load reached more than 20,000, indicating that he was not a natural elite controller. When he entered the trial in September 2015, he'd had viral suppression on treatment for more than two years.

Two additional antiretrovirals – the integrase inhibitor dolutegravir (Tivicay) and the HIV entry inhibitor maraviroc (Celsentri) – were added to his standard three-drug regimen along with nicotinamide, a form of niacin, or vitamin B3 (read more about the rationale for this choice of drugs here). He remained on this five-drug combination for 48 weeks then went back to standard therapy.

In March 2019, the man started a closely monitored treatment interruption. At AIDS 2020, Dr Ricardo Diaz of the University of São Paulo reported that more than 15 months later, the man continued to have undetectable HIV RNA (the form of viral genetic material measured in a typical viral-load test) as well as undetectable HIV DNA (the form that largely makes up the viral reservoir). In addition, the man's antibody level declined steadily, dropping low enough that a rapid antibody test became negative.

At the time, this man was the only one of the five trial participants treated with this intensified regimen who still had viral suppression after stopping treatment.

"The fact that it's a single case suggests that this may be not be real," Dr Steven Deeks of the University of California in San Francisco told aidsmap.com at the time. "We know that some people can achieve what appears to be remission with antiretroviral drugs alone. This may simply be a person who got lucky with antiretrovirals."

As Diaz reported at CROI, the research team continued to monitor the man's viral load and examined stored blood samples to analyse cell-mediated immune responses and other parameters.

While the man was on the intensified regimen, he showed increasing T-cell responses against HIV envelope proteins and Gag, HIV's major structural protein. But these cell-mediated responses "progressively disappeared" in parallel with the decline in HIV-specific antibodies after the treatment interruption.

In September 2020 the man was diagnosed with secondary syphilis. At that time, his viral load was still below the limit of detection. But on 10 November – 72 weeks into the treatment interruption – he experienced symptoms including fever, chills, headache and diarrhoea, and he was found to have a viral load exceeding 6300 copies. His HIV antibodies also started to rise around this time. In early December, he started a standard dolutegravir-based regimen, and by 1 January his viral load was again undetectable.

The emerging HIV strain had genetic differences in envelope and Gag proteins compared with the baseline strain, and the reason for this is not yet clear. Possibilities include viral evolution within the patient's body, reinfection with a new strain or re-emergence of "ancient strains" from prior dual infection, Diaz suggested, although he added that he does not personally believe the change is due to evolution.

Further genetic sequencing and analysis of antibody responses is underway in an effort to determine whether the man experienced true viral rebound or reinfection.