Large numbers now on Descovy PrEP in the United States 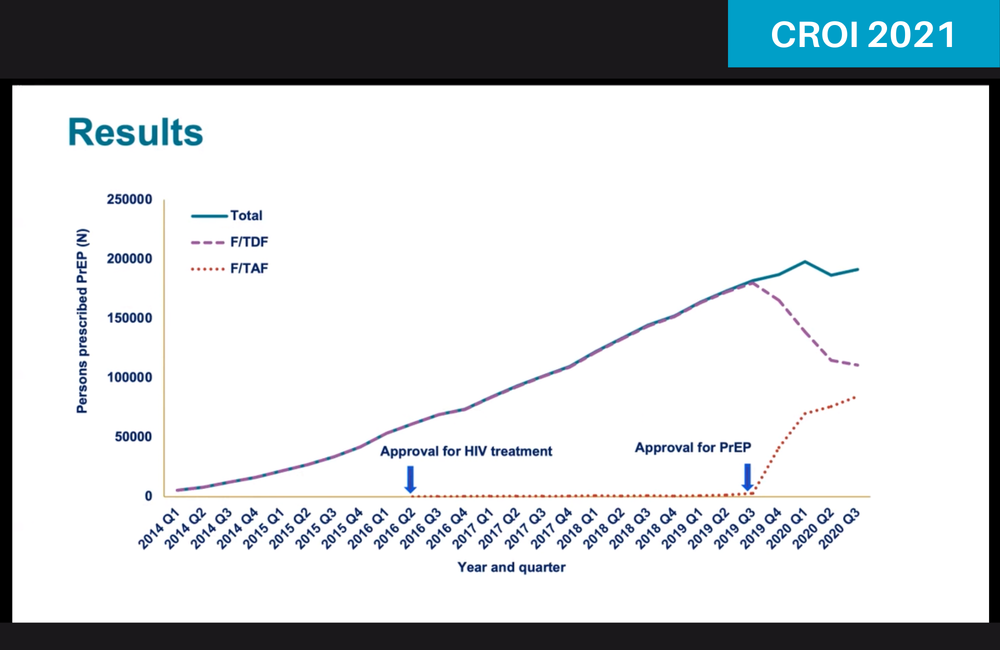 In the year following the US approval of emtricitabine/TAF (Descovy) as PrEP in October 2019, 29% of existing PrEP users switched to the newer formulation and 36% of new PrEP users started on it. Dr Karen Hoover of the Centers for Disease Control and Prevention presented these data, based on a large pharmacy database, to the virtual Conference on Retroviruses and Opportunistic Infections (CROI 2021) this week.

Two types of tablets are approved as PrEP in the US. A combination of emtricitabine and tenofovir disoproxil fumarate (TDF) was first approved in 2012. It is often marketed as Truvada, but is now available from generic manufacturers in the US, as it is in most other countries. The newer formulation combines emtricitabine and tenofovir alafenamide (TAF), is only available as branded Descovy and was approved by the US Food and Drug Administration in October 2019.

As these data show, TAF-based PrEP has been a marketing success in the US, but has not yet been approved by other regulatory agencies such as the European Medicines Agency and the World Health Organization. At present, the only efficacy data come from cisgender gay men and a small number of transgender women, and other regulators are likely to wait for the results of studies of its use by cisgender women. Moreover, given that emtricitabine/TDF is now widely available as a low-cost generic, health systems which are attentive to questions of cost effectiveness are likely to see Descovy as a niche option for individuals who have kidney problems or other specific concerns, rather than the default.

The pharmacy data from January 2014 to September 2020 showed no evidence of off-label prescribing of TAF-based PrEP before its regulatory approval. In the last quarter of 2019 there was an immediate uptake of TAF-based PrEP which mirrored a decline in the TDF-based product.

People who switched to TAF-based PrEP tended to be older and male. Switching was also more common among Latinx individuals and people living in the south of the country. The region with the least switching was the north-east.

Hoover KW et al. Trends in Truvada and Descovy prescriptions for PrEP in the United States, 2014-2020. Conference on Retroviruses and Opportunistic Infections, abstract 696, 2021.