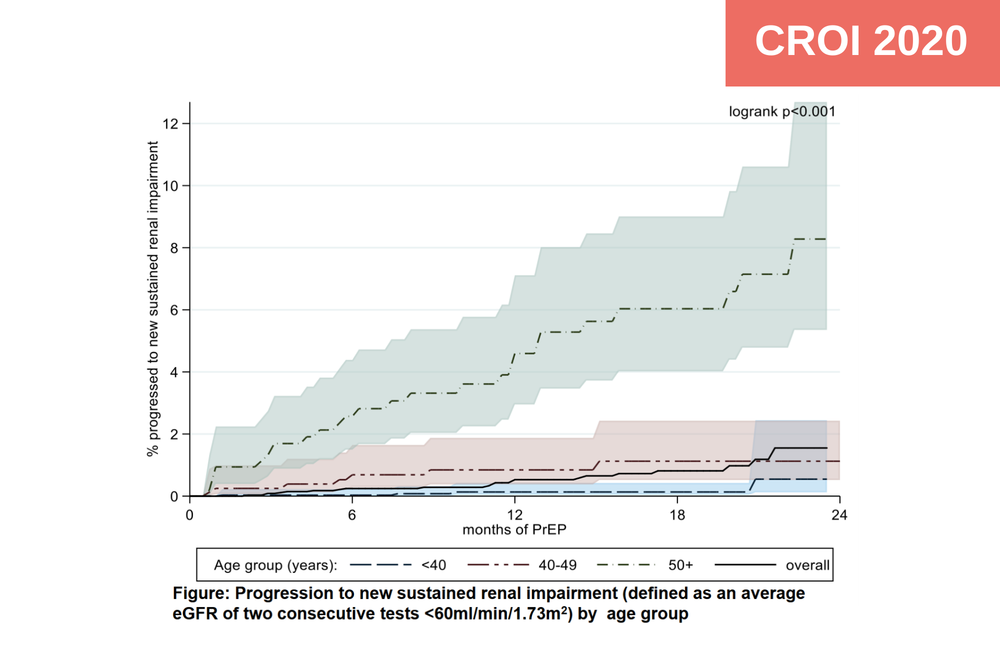 Age over 50 years and pre-existing kidney function are the risk factors for the emergence of renal dysfunction while taking PrEP, according to data from an Australian PrEP demonstration study presented to the recent Conference on Retroviruses and Opportunistic Infections (CROI 2020). The study is important because it provides 'real-world' information about the rate and risk factors for renal decline among people taking PrEP. Approximately 2% of study participants developed renal dysfunction over two years of follow-up but rates differed according to age and kidney function at the start of the study.

The research provides reassurance that long-term PrEP does not cause high rates of renal dysfunction and also helps individuals who would especially benefit from close monitoring of kidney health while taking the therapy.

Treatment with the antiretroviral drugs tenofovir disoproxil fumarate/emtricitabine as PrEP is a very effective way of preventing infection with HIV. Both drugs have a good safety and side effect profile. However, it has long been recognised that therapy with tenofovir can cause declines in kidney function.

Clinical trials into the safety and effectiveness of tenofovir-based PrEP found a very low incidence of renal impairment. A team of investigators led by Dr Hamish McManus of the Kirby Institute examined data from the New South Wales PrEP demonstration trial (EPIC-NSW) to see if this was also the case when tenofovir-containing PrEP was routinely used in real-world settings.

The study population consisted of 5868 individuals who received at least one PrEP prescription between March 2016 and April 2018. All had normal kidney function at baseline (eGFR of at least 60ml/min/1.73m2). The development of renal impairment was defined as two consecutive eGFR measurements below 60ml/min/1.73m2.

The investigators gathered information about the cumulative incidence of renal dysfunction and also examined the role of specific baseline risk factors: kidney function at the start of the study (eGFR 60-90 vs 90 and above), age (below 40 years, 40-49 years and 50 years and older), use of recreational drugs, hepatitis B and/or hepatitis C infection and the amount of time individuals had access to PrEP (medication possession ratio).

Almost all the participants were male (99%) and 85% were aged below 50 years. Approximately three-quarters had an eGFR of 90 or above. A fifth reported recreational drug use, 10% had a positive hepatitis B surface antigen result and 1% had hepatitis C virus antibodies.

“In a large real-world PrEP cohort, risk of renal impairment increased over two years of PrEP, with older patients and those with pre-existing renal dysfunction at significantly higher risk,” conclude McManus and colleagues.