Self-testing helps the partners of people with HIV to test, but not to link to care 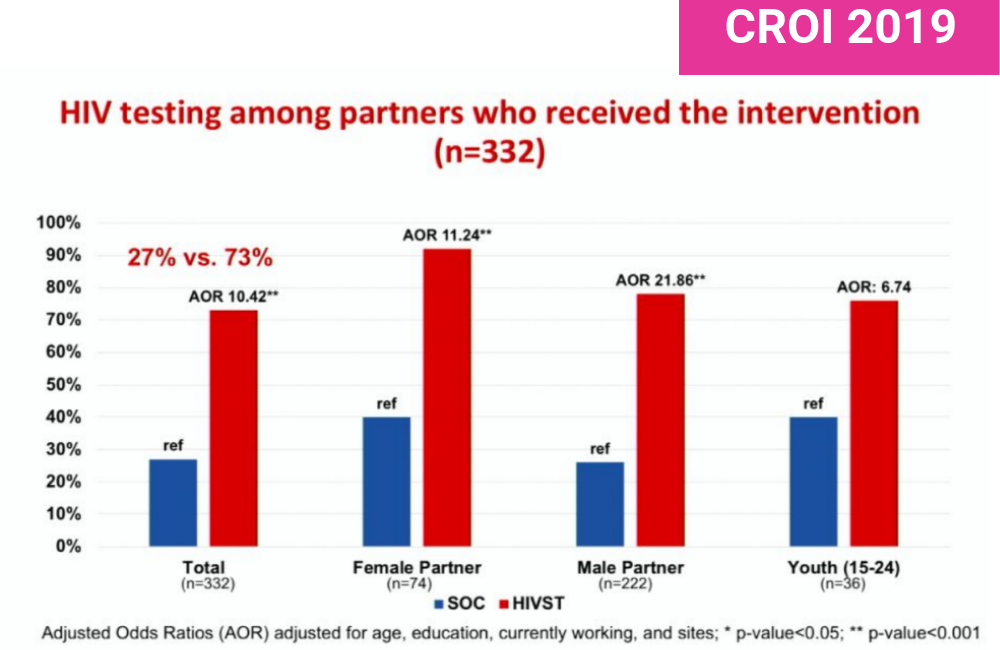 Asking people living with HIV in Malawi to pass on HIV self-testing kits to their sexual partners was an effective way to encourage partners to take a test, but linkage to care was poor in a randomised study reported at the Conference on Retroviruses and Opportunistic Infections (CROI) in Seattle last week.

Dr Kathryn Dovel of the University of California said that the partners of people living with HIV – especially male partners – are a high-priority group for HIV testing interventions, but that reaching this group was often challenging. Inspired by prior interventions in which pregnant women (who are not necessarily HIV positive) distribute self-testing kits to partners, she wanted to find out if this approach could work with the partners of people attending HIV treatment services in Malawi.

She said that there was no certainty that secondary distribution of self-test kits would be appropriate in this population. Firstly, bringing a self-test home may result in automatic disclosure of a person’s HIV status. Secondly, the partners of people who have already disclosed their HIV status may already know that they should be tested. “This may be a group of late adopters who have deep-seated barriers to testing,” she said.

In this randomised study, HIV-positive people in the intervention arm were given one OraQuick self-testing kit per partner, as well as a demonstration of how it works, counselling on disclosure of HIV status and referral slips for clinics offering confirmatory testing, if necessary.

In the control arm, HIV-positive people received the standard of care in Malawi – referral slips asking the partner to attend health screening (HIV was not specifically mentioned), along with a map of local facilities. Disclosure counselling was also provided.

The non-blinded, individually randomised study was done at three district hospitals in Malawi. Of 4237 HIV-positive people who were screened to take part in the study, the majority were excluded. The most common reasons were that the partner had recently tested for HIV, the person did not have a partner or the partner lived outside the facility catchment area. Ninety-three people who had previously experienced intimate partner violence were also ineligible for the study.

This left 484 people to be randomised, on a ratio of 1 to 2.5 to the control (135 people) and intervention (349 people) arms. The majority of those recruited were female (77%), had been taking HIV treatment for more than six months (89%), had previously disclosed their HIV status to their partner (89%) and were married or living together (83%). The mean length of the relationship was five years and the mean age was 35 years. These demographic characteristics need to be borne in mind when considering the generalisability of the study’s findings.

Follow-up data were available for 365 people. Of these, over 90% in both arms reported that they had distributed the intervention (the testing kit or the referral slip) to their partner. Of those who received the intervention, 73% of partners in the self-testing arm took the test, compared with 27% in the standard-of-care arm (after adjustment for other factors that could affect the results, a tenfold increase in the likelihood of testing). Testing rates were higher among both male and female partners.

Test results were reported for 211 participants. Of these, 19% of partners in the self-test arm and 16% in the standard-of-care arm were HIV positive.

The intervention did not provide any specific support to facilitate linkage to care and the drawbacks of this approach are now apparent. To evaluate this stage, the medical records at 23 public health facilities in the study’s catchment area were examined to see whether the study participants’ partners had enrolled in care (a laborious exercise, Dovel said). In the standard-of-care arm, in which male partners tested at health facilities, three of the four HIV-positive partners could be found.

In contrast, in the self-testing intervention arm – which had more participants – the records of only seven of 30 HIV-positive partners could be found. Ten partners who did not appear to have linked to care were approached by the researchers to ask if they had in fact done so and none said they had. Four said that they had not had time to test, two that they were coming to terms with their HIV status and two that they were afraid of their HIV status being disclosed through clinic attendance.

The intervention was acceptable – over 98% were comfortable explaining the intervention to their partner and only three individuals reported any threats or shouting due to the intervention. However, among partners, two-thirds reported that they needed their HIV-positive partner’s assistance to complete the test. Difficulties understanding the test kit instructions were reported by 16% of partners, problems interpreting the result by 8%, and concerns about the accuracy of the results by 7%.

Dovel said more research was needed on strategies – such as financial incentives – that could encourage partners receiving self-test kits to link to care.