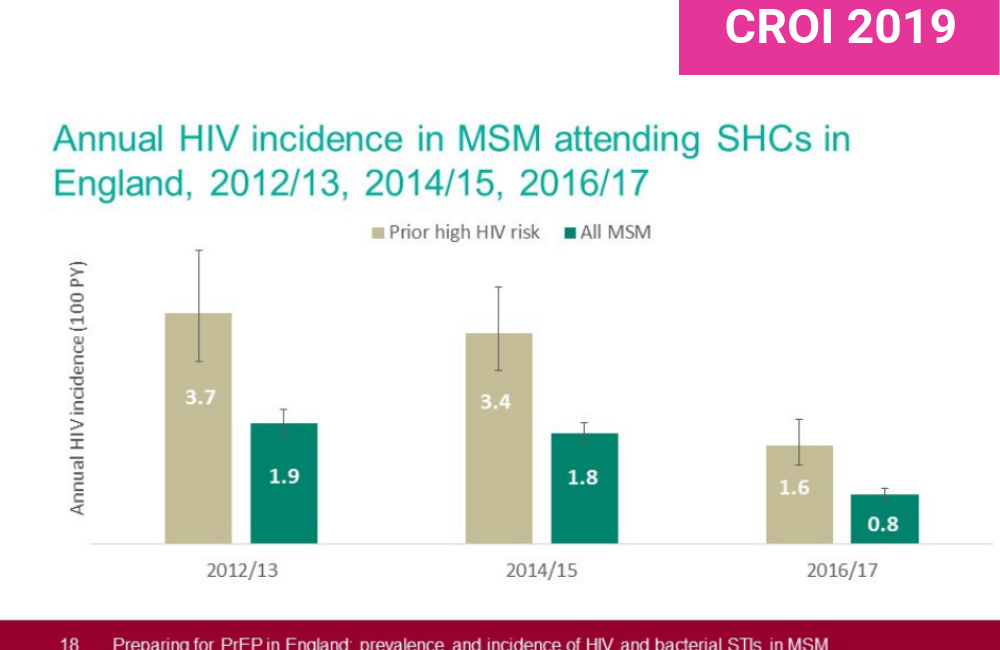 In just two years, the incidence of new HIV infections in men who have sex with men attending English sexual health clinics fell by 55%, according to data presented by Dana Ogaz of Public Health England at the Conference on Retroviruses and Opportunistic Infections (CROI 2019) in Seattle today.

Modelling studies have previously suggested that incidence began to fall in 2012 and reports of new diagnoses have been falling since 2014. The figures presented today come from routinely collected data from gay, bisexual and other men who have sex with men (MSM) who attend the same sexual health clinic twice or more in the same year. In any given year, this is around a third of the MSM who use the clinic. However, they may not be representative of the wider population of MSM.

A similar pattern was seen in MSM who had both had an HIV-negative test and a bacterial STI in the past year – a group at higher risk of HIV infection. Incidence fell from 3.7% to 3.4% and then to 1.6% (a 53% fall in the last two years).

The fall in HIV diagnoses coincides with a period when increasing numbers of men accessed pre-exposure prophylaxis (PrEP), while efforts to improve testing and prompt initiation of HIV treatment continued.

Ogaz said Public Health England conducted the exercise in order to provide a baseline for monitoring infections as the country rolls out PrEP. She said that as the situation evolves, untangling the contribution of PrEP to already falling HIV incidence and increases in STI diagnoses will require careful consideration.