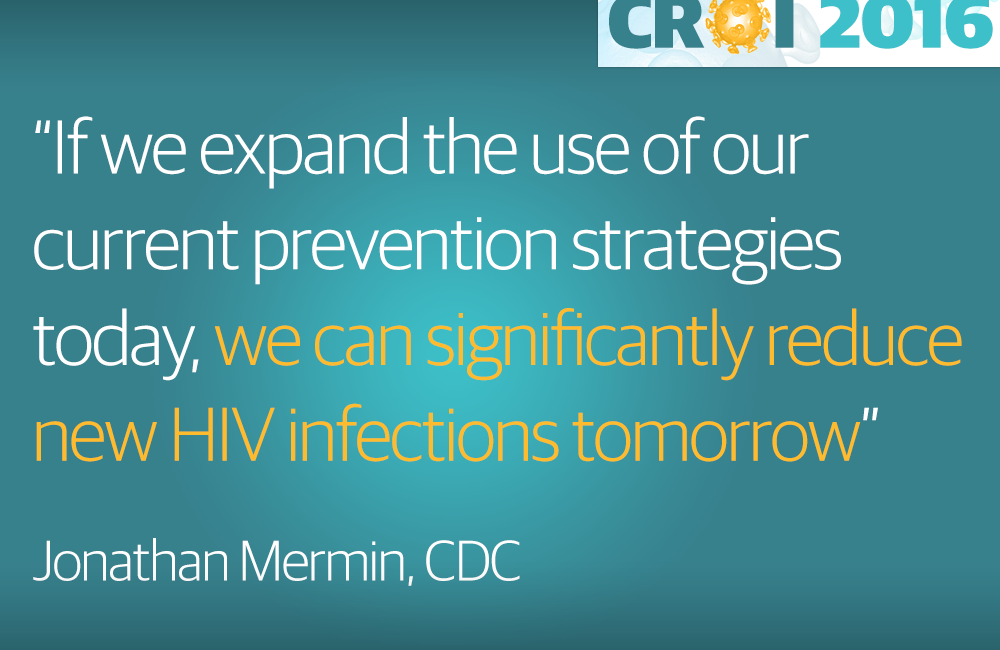 Increasing diagnosis, care and treatment of people living with HIV could lead to a large decrease in HIV incidence, preventing some 168,000 new infections by the year 2020, according to a new US Centers for Disease Control and Prevention (CDC) analysis presented at the Conference on Retroviruses and Opportunistic Infections (CROI 2016) last week in Boston. The impact of pre-exposure prophylaxis (PrEP) would be comparatively modest, but its importance would be greater if more people with HIV are not on treatment with undetectable viral load.

“We urgently need to close gaps in HIV care and treatment for people living with HIV.” Eugene McCray, CDC

Emine Yaylali of the CDC and colleagues developed a dynamic model of HIV transmission, looking at what would happen if 90% of people living with HIV are diagnosed, 85% are linked to care and 80% start antiretroviral therapy (ART) and achieve viral suppression – key goals in the continuum of care outlined in the US National HIV/AIDS Strategy.

Studies have shown that the risk of HIV transmission is reduced to almost zero when people with HIV are on ART that successfully suppresses viral load, and consistent use of tenofovir/emtricitabine (Truvada) as PrEP has been shown to decrease the likelihood of HIV-negative people acquiring HIV to a similar extent. But the relative contribution of these interventions in controlling local and national HIV epidemics is unknown.

The researchers started with the estimate that 87% of people with HIV were diagnosed, 80% were linked to care and 36% of those diagnosed had achieved viral suppression in 2015.

They then assessed the effect of raising these percentages to the National HIV/AIDS Strategy goals, based on the 96% reduction in the risk of new infections in the HPTN 052 study of serodiscordant heterosexual couples when the partner with HIV was on effective ART.

They also looked at the benefit of PrEP used by 40% of high-risk men who have sex with men (MSM), 10% of people who inject drugs and 10% of high-risk heterosexuals. For efficacy, they used the 73% risk reduction in the iPrEx trial for MSM with detectable tenofovir/emtricitabine drug levels, 75% in the Partners PrEP trial for heterosexual couples, and 49% in the Bangkok Tenofovir Study for people who inject drugs.

The model predicted that increasing the number of people on ART with undetectable viral load would, by itself, prevent more than 168,000 new infections by 2020.

Expanding PrEP would avert approximately 17,000 additional infections over the next five years. Together, expanded treatment and PrEP would prevent 185,000 new infections – a 70% reduction.

However, if diagnosis and treatment rates remained stable at 2015 levels, expanded use of PrEP alone could potentially prevent 48,000 new infections, showing that its impact is greater if more people with HIV remain off treatment with detectable viral load.

“If we expand the use of our current prevention strategies today, we can significantly reduce new HIV infections tomorrow,” Jonathan Mermin, director of CDC’s National Center for HIV/AIDS, Viral Hepatitis, STD, and Tuberculosis Prevention, stated in a CDC press release. “This study confirms that we have the right tools to dramatically reduce new HIV infections, but we have a long way to go in order to make those reductions a reality.”

“We urgently need to close gaps in HIV care and treatment for people living with HIV,” added Eugene McCray, director of CDC’s Division of HIV/AIDS Prevention. “At the same time, in the short term, we need to rapidly expand access to PrEP and other life-saving prevention tools.”

A new expert consensus statement explores how providers can give birthing parents who are living with HIV the information they need to decide for themselves.
TheBodyPro
8 Jan 21
Starting treatment