A single dose was not enough, but multiple dosing may still be protective
Liz Highleyman 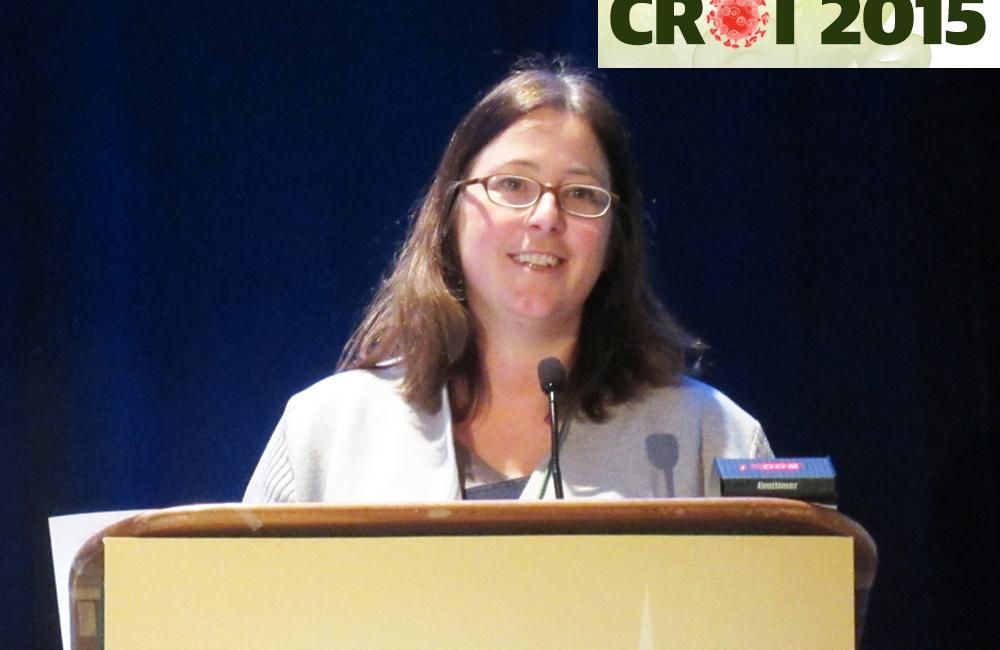 Julie Fox presenting at CROI 2015. Photo by Liz Highleyman, hivandhepatitis.com
This article is more than 8 years old. Click here for more recent articles on this topic

Levels of the HIV entry inhibitor maraviroc (Celsentri/Selzentry) in vaginal and rectal tissues did not reach high enough levels with a single oral dose to confer protection against HIV in a laboratory study, researchers reported at the Conference on Retroviruses and Opportunistic Infections (CROI 2015) last week in Seattle, USA. Multiple doses, however, could still potentially be effective for pre-exposure prophylaxis (PrEP).

Pre-exposure prophylaxis using antiretroviral agents offers a way for HIV-negative people to protect themselves from HIV infection. Currently oral tenofovir/emtricitabine (Truvada) is the only antiretroviral regimen that has been extensively tested in humans and approved for this purpose, but researchers are exploring other agents in various forms (e.g. pills, gels, vaginal rings).

Maraviroc could be an attractive option for HIV prevention because it acts at an early stage, blocking HIV from attaching to the CCR5 co-receptor that most HIV uses to enter cells; a drawback is that it might not protect against the minority of HIV strains that use the alternate CXCR4 co-receptor. Tenofovir and emtricitabine, in contrast, interfere with viral replication after HIV has already entered a host cell. Maraviroc is known to be generally safe and well-tolerated without the risk of kidney and bone toxicity associated with tenofovir. The safety of oral maraviroc for prevention in HIV-negative people is currently being studied in the HPTN 069 Next-PrEP trial.

Julie Fox of Guys and St. Thomas’ NHS Foundation Trust presented findings from a phase 4 pharmacokinetic/pharmacodynamic (PK/PD) study to test maraviroc levels in vaginal and rectal tissue after one dose and whether it protects against HIV infection. Adequate levels after a single dose could be important for event-driven or ‘on-demand’ PrEP. Some animal and human studies suggest that drug accumulation in vaginal or rectal tissue plays a role in PrEP efficacy, though studies of oral tenofovir/emtricitabine have mostly correlated effectiveness with drug levels in the blood.

“If we had made any decisions for tenofovir based on the same testing with oral dosing, we never would have studied it – but it works when you take it.” Craig Hendrix

Prior maraviroc prevention research has produced inconsistent findings. Some studies have shown that maraviroc is rapidly absorbed in the genital/anal tract and prevents HIV infection of tissue explants, or tissue samples obtained from humans and maintained in the laboratory. However, a macaque monkey study found that maraviroc failed to protect against rectal exposure to an HIV-like virus.

This open-label study enrolled 54 healthy HIV-negative adults (29 men and 25 women) with no sexually transmitted infections (STIs) at pre-entry screening. The median age was 32 years, two-thirds were white and 28% were black African.

Participants in four intervention arms took a single 300mg oral dose of maraviroc while a control group received a placebo pill. They were randomly assigned to undergo fluid and tissue sampling at 2, 4, 6 or 12 hours after dosing. After a 4-week ‘washout’ period they received another 300mg dose of maraviroc and had tissue samples collected after 24, 36, 48 or 72 hours.

The researchers measured maraviroc concentrations in participants’ blood, rectal fluid, urethral fluid from a swab, cervical-vaginal fluid, and vaginal and rectal tissue biopsy samples. Fluid and tissue samples were either frozen immediately or placed in a preservative solution (phosphate-buffered saline) and transported on ice to the Imperial College pharmacodynamics laboratory, with a median transport time of 30 minutes.

Vaginal and rectal tissue biopsy cuts were then cultured in the lab and exposed to CCR5-tropic HIV-1 (virus using the CCR5 co-receptor) and incubated for two hours. Over 15 days of culturing the investigators measured p24 antigen levels, an early marker of HIV replication.

Maraviroc was safe and well-tolerated, with no reported side-effects.

When vaginal tissue samples were exposed to HIV, p24 levels were reduced at 2 hours post-dosing, indicating some antiviral activity, but this effect was lost by 4 hours. In exposed rectal tissue, p24 levels remained high at all time points, showing no evidence of protection.

"Although no protective effect of single dose maraviroc [was] seen, this does not preclude an effect with multiple maraviroc dosing," they added, noting that further studies are underway.

Following the presentation, attendees discussed the possible meaning of these findings. Session moderator Marta Boffito from Chelsea and Westminster Hospital stressed that “methodologies need to be optimised and standardised...we're starting to see interesting results but they're not always in agreement.” She suggested that this type of research should include a tenofovir comparison, since it has a known protective effect.

Ian McGowan from the University of Pittsburgh said that the “devil is always in the details” with regard to the timing of testing, since there is evidence of very rapid dissociation of maraviroc from tissue.

Craig Hendrix from Johns Hopkins cautioned that when the same type of study was done using tenofovir – looking at p24 levels in tissue samples after a single oral dose – it also showed no protective effect. “It's important to understand the relationship between in vitro, ex vivo and in vivo testing,” he said. “If we had made any decisions for tenofovir based on the same testing with oral dosing, we never would have studied it – but it works when you take it.”