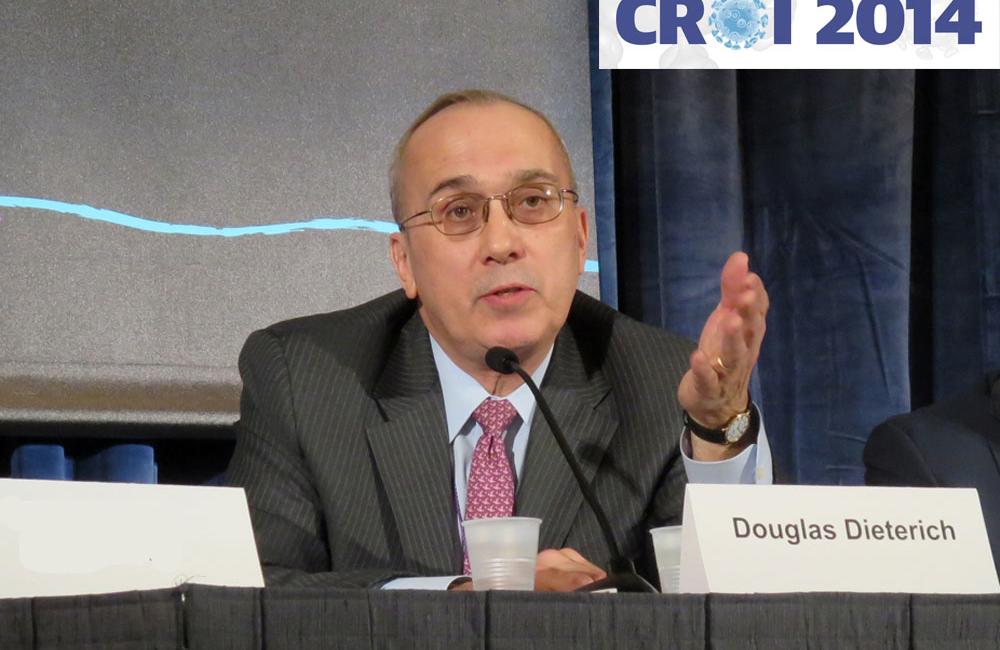 Prof. Douglas Dieterich of Mount Sinai School of Medicine discusses recent advances in treatment of hepatitis C and HIV co-infection at CROI 2014. Photo by Liz Highleyman / hivandhepatitis.com
This article is more than 8 years old. Click here for more recent articles on this topic

Simeprevir (Olysio) received marketing approval for treatment of hepatitis C mono-infection in the US November 2013 and is currently awaiting approval in the European Union. Simeprevir is a second-generation HCV protease inhibitor that is better tolerated than telaprevir and boceprevir, the first protease inhibitors approved for hepatitis C treatment. It is dosed once daily in combination with pegylated interferon and ribavirin. It is currently licensed for treatment of genotype 1 infection, but is active against all genotypes with the exception of genotype 3.

Product developer Janssen designed the phase III C212 study in order to establish the efficacy of simeprevir in people with HIV and hepatitis C co-infection. The study recruited 106 people with genotype 1a (n=88) or 1b (n=18) infection, without liver cirrhosis, stratified according to previous treatment history. Half of participants (53) had not previously taken hepatitis C treatment. The remainder were relapsers (15), partial responders (15) and null responders (28). Null responders are least likely to respond to a subsequent interferon-based regimen because, by definition, they did not respond to a previous interferon-based regimen and are therefore likely to have poor ability to either tolerate or respond to subsequent interferon treatment.

The trial evaluated a once-daily dose of simeprevir in combination with pegylated interferon and ribavirin according to a response-guided treatment protocol. Previously untreated participants and prior relapsers received 12 weeks of treatment with simeprevir and 24 or 48 weeks of treatment with pegylated interferon and ribavirin, according to virologic response at weeks 4 and 12. Partial or null responders all received 48 weeks of interferon treatment, as did people with cirrhosis.

The primary endpoint of the study was the proportion of participants with a sustained virological response 12 weeks after completing treatment (SVR12) compared to a historical control derived from the APRICOT study of pegylated interferon and ribavirin treatment in people with HIV and HCV co-infection. 74% of all study participants achieved SVR12. Among participants who had not previously taken hepatitis C treatment, 79% achieved SVR12 (42 of 53 participants), compared to 29% treated with pegylated interferon and ribavirin in the historical control group (p<0.001).

Eighty-nine per cent of participants met the criteria for response-guided therapy and achieved SVR12 after a 24-week treatment course and there was no difference between previously untreated patients and prior relapsers in this respect.

A number of sub-group analyses were carried out in order to tease out where differences might exist in responses to treatment. In particular, the investigators looked at differences between genotypes 1a and 1b, and between patients with and without the Q80K hepatitis C mutation. This naturally-occurring mutation, or polymorphism, is present in approximately half of all cases of genotype 1a infection, but is not present in genotype 1b virus.

Eighty-nine per cent of all patients with genotype 1b infection achieved SVR12 compared to 71% of patients with genotype 1a. No difference was found in treatment response in genotype 1a patients according to the presence of the Q80K mutation (67% with vs 72% without). This lack of difference, suggested Prof. Dieterich, may be a consequence of higher adherence among people living with HIV, which may be enough to overcome the presence of this mutation.

The investigators also analysed responses according to the degree of liver damage, although the proportion of participants with advanced liver damage (fibrosis stages F3 and F4) was 21%. In previously untreated patients, 89% of those with less advanced liver disease (F0-F2) achieved SVR12 compared to 57% of those with F3/F4 disease. In other study arms, the numbers treated are too small for meaningful comparison. Overall, 80% of F0-F2 patients and 64% of F3-F4 patients achieved SVR12.

Treatment with simeprevir and pegylated interferon/ribavirin was fairly well tolerated. Four patients discontinued treatment due to adverse events and throughout the entire study 46 patients experienced grade 3 or 4 adverse events, of which ten were categorised as serious. Grade 3 and 4 adverse events were largely attributable to pegylated interferon and ribavirin (neutropenia, pruritus). Rash occurred in 16 participants during the first 12 weeks of treatment, but none were serious cases. There were two cases of grade 3 or 4 photosensitivity, both known side-effects of simeprevir. The most frequent side-effects (each experienced by at least 25% of patients) were headache, rash and nausea.

Grade 3 or 4 haemoglobin reductions or bilirubin elevations were rare, occurring in only 1.3% of patients.

Participants with the IL28B 'CC' genotype, which confers a better response to interferon-based treatment, were more likely to achieve SVR12 (96 vs 68 and 61% of 'CT' and 'TT' genotypes respectively). All previously untreated patients, prior relapsers and partial responders with the 'CC' genotype achieved SVR12, suggesting that IL28B genotype will continue to be an important consideration when determining whether to embark on a course of treatment with simeprevir. A similar difference was apparent in the faldaprevir study also presented during the conference session. Professor Jurgen Rockstroh, session chair, questioned whether triple regimens combining a protease inhibitor with pegylated interferon and ribavirin are sufficiently potent to cure patients with a non-CC IL28B genotype, whether or not they have HIV co-infection.