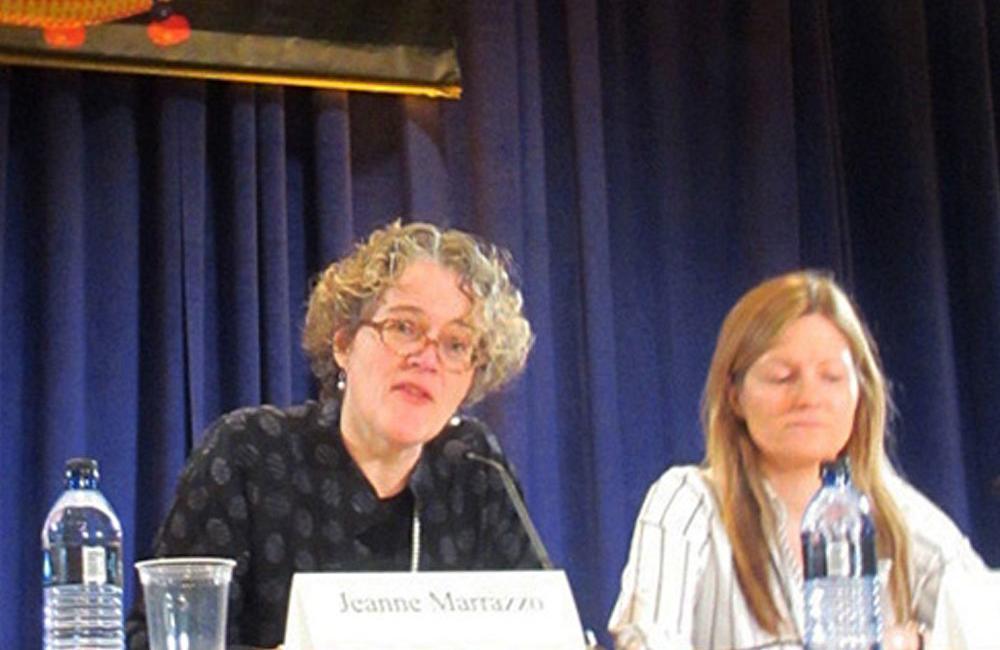 Jeanne Marrazzo discusses results of the VOICE study at CROI 2013. © Liz Highleyman / hivandhepatitis.com
This article is more than 10 years old. Click here for more recent articles on this topic

The failure of one of the largest trials yet conducted of HIV drug-based prevention methods poses questions for how to turn vaginal microbicides and oral pre-exposure prophylaxis (PrEP) into methods people can actually use, the 20th Conference on Retroviruses and Opportunistic Infections (CROI 2013) in Atlanta heard today.

The VOICE trial randomised 5029 women from three sites in South Africa, two in Zimbabwe and one in Uganda, although Durban in South Africa, with 3110 enrolled, provided more than half the participants. The women were randomised to use one of three prevention methods or two placebos (dummy methods):

The tenofovir oral PrEP arm, and the tenofovir vaginal gel and placebo arms of the trial were stopped due to futility in September and November 2011 respectively. ('Futility' means that the trial's data and safety monitoring board, which sees who is receiving treatment and who is receiving placebo, realised that there was no possibility that continuing the trial would produce a positive result.) The Truvada PrEP and placebo-pill arms, however, were continued.

But the conference heard today that Truvada had also not proven effective in preventing HIV and that therefore all three methods had proved no better than placebo.

This was a group of relatively young (average age 25) and largely unmarried (79% single) women. Retention – keeping trial subjects attending appointments – was good, with only 9% dropping out of the study.

During the trial 334 of the women tested HIV positive, but 22 of them turned out to have entered the trial while actually having been infected with HIV very shortly beforehand and so not testing HIV antibody positive. This means 312, or 6.2% of participants became infected during the trial, which translates into an annual incidence rate (infection rate per year) of 5.7%, with strong geographical variance by site from 0.8% to 9.9%.

None of the three prevention methods resulted in fewer HIV infections than placebo. In the women using the tenofovir-gel microbicide there were 15% fewer infections versus placebo, but this was not statistically significant. In the oral PrEP arms there were actually more infections in women taking PrEP compared to placebo. Women taking Truvada were 4% more likely and women taking tenofovir alone 49% more likely to become HIV positive than women taking placebo and in the latter case this was almost statistically significant (95% confidence interval 0.97-2.29, p = 0.07).

The assays used could detect whether drug had been taken in the last two days on oral PrEP, and used in the last three days in the case of microbicide gel, so some may possibly have used PrEP or microbicide some time since the previous trial visit, but 50 to 58% of women, depending on which group they were in, had no detectable drug in their blood at any trial visit.

These results seem to back up what was found in the similarly ineffective FEM-PrEP trial and in a recent pilot trial of PrEP in young gay men: being young seems to make it particularly difficult to adhere to these biomedical prevention methods and, as the investigators comment, suggests that "products that are long-lasting and require minimal daily adherence may be more suitable for this population." They also called for more social research to determine which populations might benefit.

In addition, as an audience member commented, the benefits of joining a trial like VOICE in a resource-poor setting – health monitoring, condoms, the ability to talk about sex with a counsellor, and so on – may be so large as to make the disclosure of non-adherence, and of other lapses such as not using condoms, almost impossible in the perception of the participants.

A webcast of the session in which this research was presented, HIV prevention: ARV, counseling, contraception, and condoms, is available on the conference website.