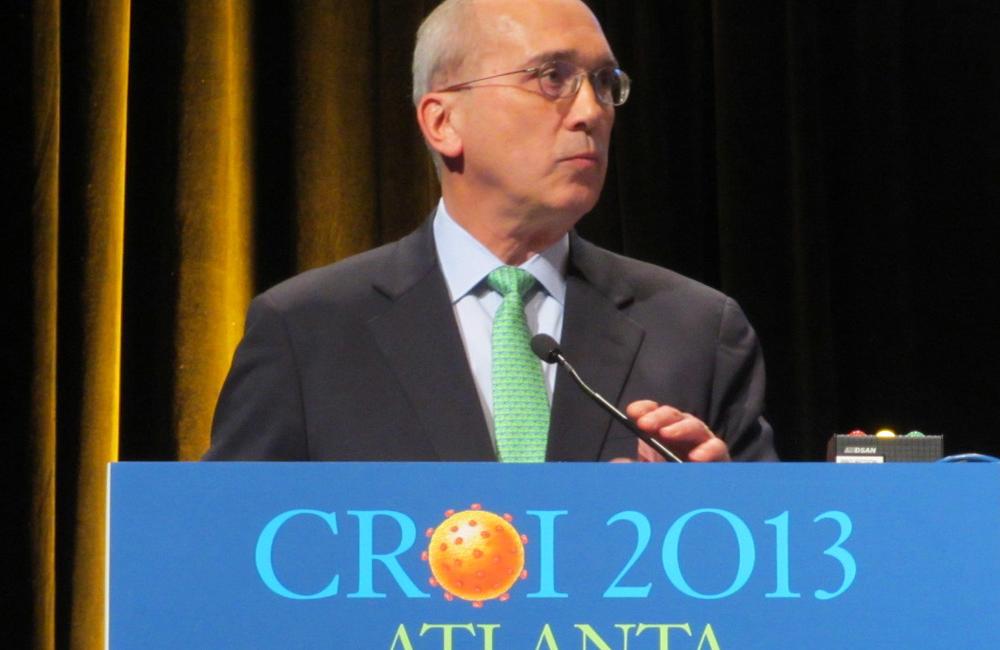 Adding the new hepatitis C virus (HCV) protease inhibitor simeprevir (formerly TMC435) to pegylated interferon and ribavirin cures about three-quarters of HIV/HCV co-infected people, most of them with a shortened course of therapy, researchers reported last week at the 20th Conference on Retroviruses and Opportunistic Infections (CROI 2013) in Atlanta.

Direct-acting antiviral agents have brought about a new era of treatment for chronic hepatitis C. While interferon-free regimens are on the horizon, many patients have advancing liver disease and cannot wait. Although HIV-positive people with hepatitis C experience more rapid liver disease progression, they will have to wait longer for interferon-free combos, as new agents are typically approved for HCV mono-infected people first.

Douglas Dieterich from Mt Sinai School of Medicine in New York presented findings from the TMC435-C212 study, evaluating the safety and efficacy of the HCV NS3/4A protease inhibitor simeprevir plus pegylated interferon/ribavirin in co-infected individuals with HCV genotype 1.

This open-label, single-arm, phase III study included 106 HIV/HCV co-infected people, most of them on antiretroviral therapy (ART), who could either have no previous hepatitis C treatment or be prior non-responders.

Looking at HIV-related characteristics, they had a median CD4 cell count of 629 cells/mm3 (561 cells/mm3 for those on ART, 677 cells/mm3 for those untreated). Almost all people on ART had HIV RNA <200 copies/mL, as did 23% of those not on HIV therapy. Nearly everyone on treatment was using NRTIs, 87% were on raltegravir (Isentress), 15% were on rilpivirine (Edurant) and 3% each were using maraviroc (Selzentry or Celsentri) and enfuvirtide (T-20, Fuzeon).

All participants received 150mg once-daily simeprevir in combination with pegylated interferon alfa-2a (Pegasys) plus weigh-adjusted ribavirin. Treatment-naive people and those who relapsed after prior interferon-based therapy received the triple regimen for 12 weeks, then continued on pegylated interferon/ribavirin alone through week 24.

At that point, using a response-guided therapy algorithm, early responders (defined as HCV RNA <25 IU/mL at week 4 and undetectable at week 12) stopped all study drugs, while the rest continued on pegylated interferon/ribavirin alone for an additional 24 weeks. Prior partial responders, null responders and everyone with cirrhosis (regardless of prior response) received the full 48-week regimen.

Dieterich presented data from an interim analysis of 100 patients who completed 24 weeks of treatment or discontinued prior to that point; within this group, 71 had reached 28 weeks and 27 had reached 36 weeks.

At week 4, the overall rapid virological response (RVR) rate was 66%. Prior naives, relapsers and partial responders all had good early response (71, 93 and 80%, respectively), but the RVR rate for null responders was only 37%.

Turning to preliminary sustained response rates, calculated for patients eligible for response-guided therapy, 86% overall had undetectable HCV RNA 4 weeks after completion of treatment (SVR4) and 77% were still undetectable at 12 weeks post-treatment (SVR12). Corresponding rates were 84% SVR4 and 75% SVR12 for treatment-naive patients, and 90% SVR4 and 80% SVR12 for prior relapsers.

A large majority (88%) of eligible participants met the response-guided therapy criteria and finished treatment at week 24. For this group, the SVR4 rate was 85% and SVR12 was 75%.

Overall, 15% of patients experienced on-treatment failure and ended therapy based on non-response stopping rules. Failure rates ranged from 0% for prior relapsers, to 9% for naives to 36% for prior null responders. In addition, 13% overall (10% of naives and 18% of prior relapsers) relapsed during post-treatment follow-up. All relapses occurred among people with HCV sub-type 1a. Prior null responders were still being followed, but 64% had not experienced treatment failure at the interim analysis.

None of the participants on antiretroviral therapy saw an increase in HIV RNA indicating loss of viral suppression. Absolute CD4 cell counts fell during treatment with interferon – a typical finding – but CD4 percentages rose or remained stable.

Triple therapy with simeprevir was generally safe and well tolerated. Serious adverse events were reported by 5% of patients, and 4% discontinued treatment for this reason. The most common side-effects were fatigue (41%), headache (27%) and nausea (26%), typical of pegylated interferon/ribavirin. Just over one-quarter developed neutropenia, 21% had anaemia, 20% reported itching and 17% developed skin rash. In addition, 49 people experienced bilirubin increases, mostly mild to moderate, that were not associated with liver enzyme elevations.

Simeprevir plus pegylated interferon/ribavirin "led to high virologic response in co-infected patients, regardless of prior response", the investigators concluded. "Simeprevir was well tolerated, with a safety profile similar to HCV mono-infected patients."

At a press conference discussing hepatitis C research, Dieterich said the combined findings were "very encouraging", showing that co-infected people have outcomes "about equal" to those of HCV monoinfected individuals.

These next-generation HCV protease inhibitors "represent a significant advance" over boceprevir (Victrelis) and telaprevir (Incivo or Incivek), Dieterich said, as they are once daily, easier to take, and have dramatically reduced side-effects and higher success rates.

"We don’t know when interferon-free regimens will be on the market, and in the meantime we're still stuck seeing patients every day, and some are really sick and need to be treated now," he continued. These new compounds are "easier and far superior" and can be used until interferon-free treatment is available.

Moderator David Thomas of Johns Hopkins University predicted that while the approval of interferon-free combinations is not expected this year, the first components are likely to become available. Comparing the hepatitis C drug development process to HIV, he said, "It's as if we're going from Crixivan to Atripla in a year and a half."