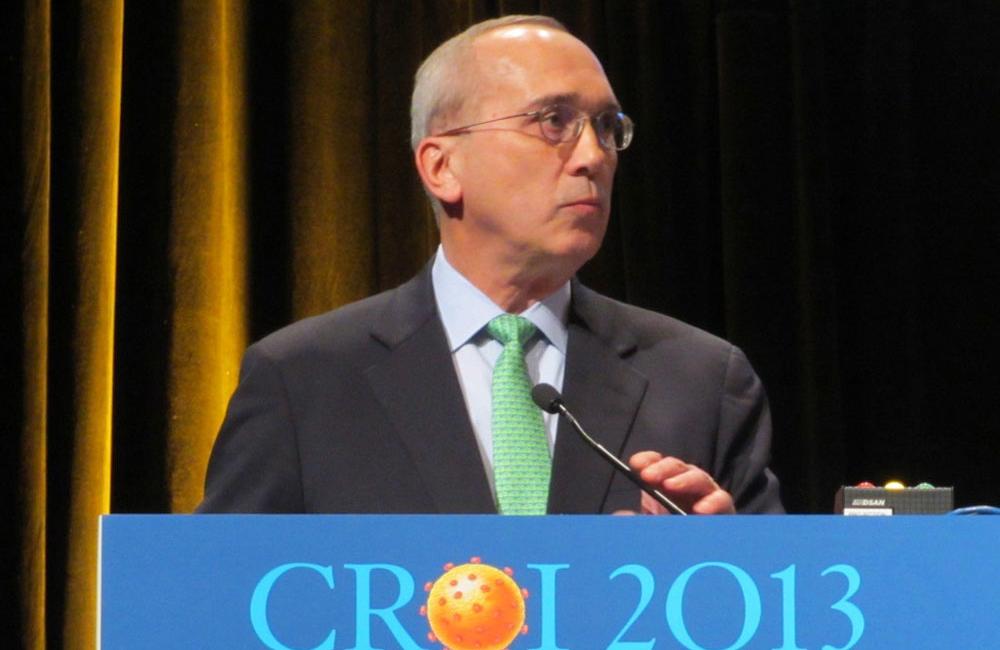 Adding the hepatitis C virus (HCV) protease inhibitor faldaprevir (formerly BI 201335) to pegylated interferon and ribavirin led to a higher early response rate and the potential for shorter treatment for HIV/HCV co-infected people, according to a presentation last week at the 20th Conference on Retroviruses and Opportunistic Infections (CROI 2013) in Atlanta.

Direct-acting antiviral agents that target different steps of the HCV lifecycle have ushered in a new era of treatment. While interferon-free, all-oral regimens are on the horizon, many people with chronic hepatitis C have advancing liver disease and cannot wait. Although HIV-positive people with hepatitis C experience more rapid liver disease progression, they will have to wait longer for approval of interferon-free combinations, as new agents are typically approved for HCV monoinfected people first.

Douglas Dieterich from Mt Sinai School of Medicine in New York presented findings from the STARTVerso 4 trial, looking at the safety and efficacy of faldaprevir plus pegylated interferon/ribavirin in co-infected individuals with HCV genotype 1.

This open-label phase III study enrolled 308 HIV/HCV co-infected people who were either never before treated for hepatitis C (78%) or relapsed after prior interferon-based therapy (22%).

About 80% of participants were men, a similar proportion was white, and the average age was 47 years. Nearly 80% had harder-to-treat HCV sub-type 1a, 17% had compensated liver cirrhosis (stage F4 or FibroScan cut-off of >13kPa) and about 80% had high baseline HCV viral load.

At study entry they had well-controlled HIV, with a mean CD4 cell count of approximately 450 cells/mm3. Nearly 25% were taking antiretroviral regimens containing efavirenz (Sustiva or Stocrin), about 20% were taking ritonavir-boosted atazanavir (Reyataz) or darunavir (Prezista), 47% were taking raltegravir (Isentress) or other anti-HIV drugs, and 4% were not on antiretroviral therapy.

Participants were treated with once-daily faldaprevir in combination with 180mcg once-weekly pegylated interferon alfa-2a (Pegasys) plus weight-based ribavirin. Faldaprevir doses were adjusted according to which antiretrovirals were used, based on data from drug-drug interaction studies.

Three separate phase I trials, described at the same session by Jens Kort from Boehringer Ingelheim, tested pharmacokinetic interactions between faldaprevir and darunavir/ritonavir, efavirenz, and tenofovir (Viread, also in several coformulations) in healthy HIV-negative volunteers; a study of atazanavir is underway.

Therefore, STARTVerso 4 participants taking efavirenz received 240mg faldaprevir, people taking boosted atazanavir or darunavir got 120mg and those on raltegravir or maraviroc (Selzentry or Celsentri) were randomised to one of the two doses.

Everyone assigned to 120mg faldaprevir stayed on triple therapy for 24 weeks, whilst those taking 240mg were randomly assigned to do so for 12 or 24 weeks. Using a response-guided therapy algorithm, people with "early treatment success" (defined as unquantifiable HCV RNA at week 4 and undetectable at week 8) were re-randomised at week 24 to either stop treatment or continue pegylated interferon/ribavirin alone through week 48; everyone without early success took the longer course.

At week 4, 60% of previously untreated participants and 74% of prior relapsers had HCV RNA below the level of detection, rising to 82 and 91%, respectively, at week 12. Rates for the relapsers were similar to those seen in the SILEN-C1 study of HCV mono-infected people, at 76 and 93%. Most participants – 77% of treatment-naives and 88% of relapsers – had early success and were eligible for randomisation to shorter treatment.

None of the participants on antiretroviral therapy saw an HIV RNA increase indicating loss of viral suppression.

Triple therapy was generally safe and well tolerated. The most common side-effects were nausea (37%), fatigue (33%) diarrhoea (27%), headache (23%) and weakness (22%) – rates similar to those seen with pegylated interferon/ribavirin alone. About one-tenth experienced serious adverse events and there were three deaths, though none were considered related to study medications. At the time of the interim analysis 18 participants had withdrawn early due to adverse events.

Looking at side-effects that have proven problematic with other HCV drugs, 18% of participants developed anaemia, 16% had neutropenia and 18% reported skin rash. Faldaprevir was "much less toxic" than the approved HCV protease inhibitors boceprevir (Victrelis) and telaprevir (Incivo or Incivek), Dieterich said.

At a press conference discussing hepatitis C research, Dieterich said the combined findings were "very encouraging", showing that co-infected people have outcomes "about equal" to those of HCV monoinfected individuals.

The two next-generation HCV protease inhibitors "represent a significant advance" over telaprevir and boceprevir, Dieterich said, as they are both once-daily and easy to take, with dramatically fewer side-effects and higher success rates.

"We don’t know when interferon-free regimens will be on the market, and in the meantime we're still stuck seeing patients every day, and some are really sick and need to be treated now," he continued. These new compounds are "easier and far superior" and can be used until interferon-free treatment is available.

Moderator David Thomas of Johns Hopkins University predicted that, while the approval of interferon-free combinations is not expected this year, the first components are likely to become available. Comparing the hepatitis C drug development process to HIV, he said, "It's as if we're going from Crixivan to Atripla in a year and a half."

A webcast of the session in which this research was presented, Advances in Hepatitis Therapy, is available on the conference website.